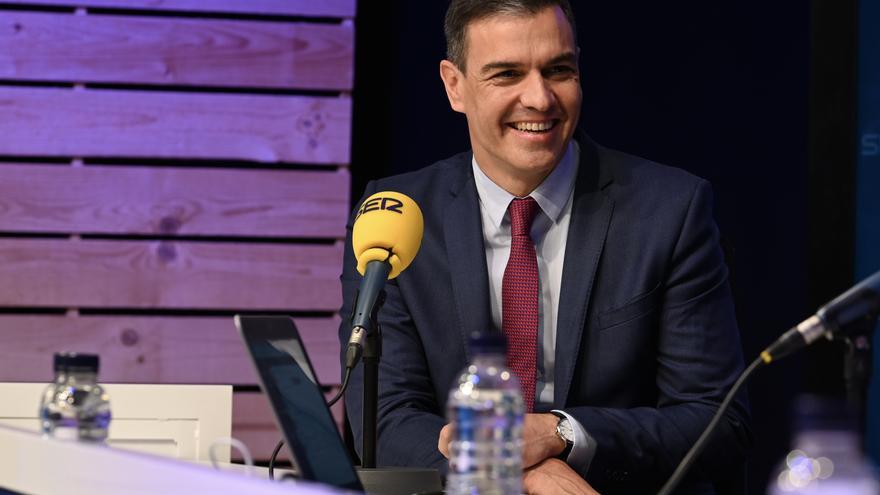 Pedro Sánchez sees after the pardons "an enormous opportunity" to resolve the political conflict in Catalonia and, in fact, acknowledges that he changed his position regarding the grace measure based on the "usefulness to restore coexistence" that he considers it now entails "forgiveness" to the independence leaders who were in prison while he believes that in the past what was useful in this objective was the application of 155 and the sentence of the Supreme Court. "The message of the pardons is that what we want is not a measure of grace regarding nine people who committed illegalities but a message to the Catalan citizens that we want to turn the page, move forward, overcome and repair a crisis that affected us all from the political and emotional point of view, "he expressed in an interview on Cadena SER in which he advocated dialogue with the Generalitat. However, the president rejects the presence of the ERC leader, Oriol Junqueras, at the table between governments.

"It is a table between governments, between representatives of the two executives. Junqueras still has a few years of disqualification in terms of institutional representation that obviously does not sympathize with a representation of the Catalan Executive in that dialogue," replied Sánchez. "The agreement is between governments," he finished off with the possibility that the Government would put Junqueras as a condition for the meeting of that body agreed upon by ERC and PSOE before his inauguration but which only met once. That time, people who did not have any position in the Generalitat participated, such as Josep Lluís Rius, who had been the chief of staff for Quim Torra and Carles Puigdemont; and the deputies Esla Artadi, Marta Vilalta and Josep Maria Jové. ERC has cooled down the possibility of demanding that Junqueras sit at that table.

Sánchez has opted to start this dialogue on issues in which both governments can have points of understanding and park those that distance them, such as holding an agreed referendum, which is the Generalitat's proposal. "An agreement would fit in the law," he responded to the question of whether a referendum for self-determination would have a fit. "The Constitution is not a dogma but it does mark the territory on which we can dialogue," said Sánchez, who reiterated that he does not conceive of "Spain without Catalonia or Catalonia without Spain." Thus, it has called on the independence movement to take into account the half of Catalan society that is not independent. "You cannot force them to choose whether they are Catalan or Spanish. A majority consider themselves as Catalan as they are Spanish," he said. "It is not possible to make invisible a non-minor part of Catalan society that wants a shared roadmap," insisted the socialist leader, who believes that the Government has to make "Catalonia speak to Catalonia."

The president has celebrated, however, the Generalitat is advancing "on the path of recovering institutional normality" in reference to the presence of the president, Pere Aragonés, at a dinner with him and King Felipe VI on the occasion of the Mobile World Congress held in Barcelona. For the president it is an important gesture since territorial "discord", in his opinion, "weighs down" the economy. However, it has recognized that the process for the resolution of the conflict will be long and complex. "You have the feeling that it will not fix overnight," he admitted. Although José Luis Ábalos admitted that the pending cases in the Court of Accounts are "stones in the way", the president has limited himself to "expressing absolute respect for those works" and has recalled that the resolutions they issue can be appealed and has refused to give instructions to the State Bar, as claimed by the independence movement.

Sánchez has opted for both governments to work on issues that matter to citizens, among which he has placed overcoming the pandemic or economic recovery. He has also referred to these two questions before the government crisis that is projecting and that he has not denied, although he assures that "it is not a priority". These issues, in addition to the demographic challenge, will be the focus of the conference of presidents to be held in Salamanca the last week of July.

"The PP is making the opposition more furious"

The president has lamented the position that Pablo Casado is maintaining with respect to the Executive and believes that the Spanish will be "taking" note of the attitude of "attrition" against the Government in the midst of a pandemic or with its refusal to renew constitutional bodies. “The PP, during these years, is making the most furious opposition in Europe. It has not recognized the legitimacy of the Government, it has used the pandemic against the Government of Spain, it has called into question our democratic quality in Europe, yesterday we saw how they broke a basic consensus around the celebration of recognition of the victims of terrorism ", Sánchez has enumerated, who considers, however, that he has failed, as demonstrated in the Colón demonstration a few weeks ago and in the puncture in the collection of signatures against the pardons.

Sánchez has accused the PP of "using Catalonia as a kind of pim pam pum to try to legitimize itself in other territories with a victimizing discourse". "If you don't have a project for Catalonia, you don't have it for Spain, you can't have a project turning your back on the 25% of the national GDP that Catalonia represents," said the president, who has been especially hard on José María Aznar after accuse José Luis Rodríguez Zapatero of coming to power "using the terrorist attacks" of 11M and him of doing so with a motion of no confidence supported by "separatists and exterrorists." "He claims a figure that is not such in terms of his historical contribution and the Spanish right in his understanding with peripheral nationalism," said Sánchez after recalling that he made a pact with Basque and Catalan nationalism.

"Aznar should ask for forgiveness"

"On many occasions there are political figures who are devoured by their own characters," said the president, who considers that Aznar should "apologize for putting Spain in an unjust war and being more just with Spanish democracy": "Legitimacy It is decided by the Spanish with their votes in each of the electoral processes. " Although he "represents the past", Sánchez has regretted that his positions have "returned to the leadership of the PP."

Although he has ironic with the threat of a Vox motion of censure, he has taken the opportunity to send a message to Inés Arrimadas, who encourages Casado to present this initiative that he has shown willing to support: "You will have to reevaluate what is your space within the Spanish political system. If a party is described as center and liberal it makes little sense that it only pacts with the right and the extreme right. "

Regarding overcoming the pandemic, Sánchez has been largely hopeful due to the acceleration in the rate of vaccination. Thus, he recalled that this week a record shipment of vaccines arrives with six million doses when there are already 15 million people with the complete schedule and half of the population has at least one puncture. However, he has acknowledged that he is concerned about outbreaks like the one in Mallorca, which affects 900 people, mostly young people who were on vacation for the end of their studies. Despite the fact that the accumulated incidence and contagion data are the lowest since August last year, the Government considers that precautions must be maintained and that is why it will impose conditions on travelers from the United Kingdom after the country has included the Balearic Islands in their 'green traffic light' so that they can return without quarantine: they will have to provide vaccination certification or negative PCR.

"We will see a process of adaptation of citizens to this new reality, to this recovery of the old normality," he said about the end of the mandatory use of the mask in outdoor spaces that began this weekend.

The European Parliament admits a complaint against the abuse of temporality