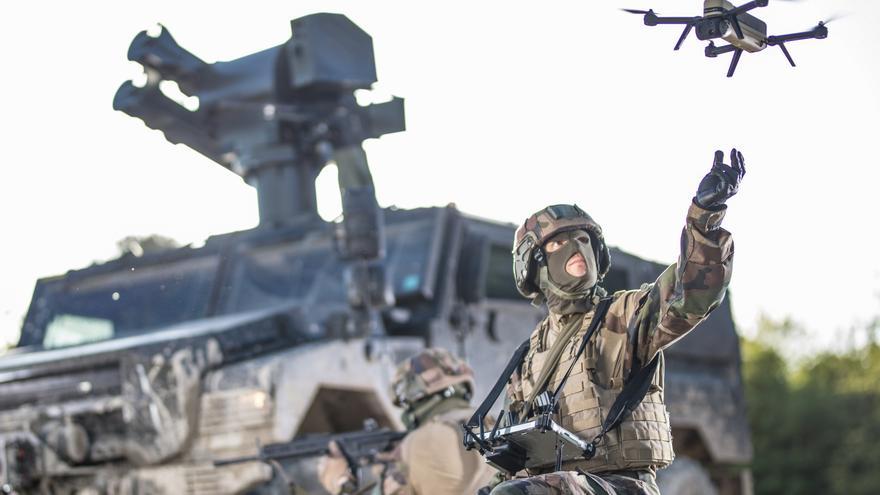 One report states that “current EU weaponry driven by digitization and artificial intelligence represents a threat to the citizens of Europe.” The study, carried out by defense expert Christoph Marischka, of the German Peace Movement Network, and edited by the Left group of the European Parliament, concludes that a “worrying use of artificial intelligence is being made in deepening of militarization “.

The report addresses how the arms industry and venture capital funds have lobbied the European Commission, the European Space Agency and the governments of the member states, as well as the inclusion of weapons projects as part of the industrial policy of the states. members (France and Germany) and the harmonization of the European armed forces through the digitized Combat Cloud. Likewise, the author analyzes why cyber and information warfare is the center of the EU’s long-term military strategy, and the advance towards space warfare and the dual use of European satellites in reconnaissance, surveillance and communication in territories beyond the EU.

The first 16 projects of new military technology have been approved a few months ago to be the first EU brand armament in history, as detailed elDiario.esAn unmanned ground vehicle, algorithms to handle swarms of drones, high precision missiles or cybersecurity reinforcement systems will receive a total of 205 million euros through the European Defense Industrial Development Program (PEDID). However, this financing line is only a “pilot”.

The European Defense Fund is budgeted at 9,000 million euros for the period 2021-2027. For reference, the EU plans to invest a total of € 9.2 billion in the same period in the program Digital Europe, whose objective is to develop supercomputing, artificial intelligence, civil cybersecurity or advanced digital skills.

He iMUGS (Unmanned Integrated Modular Land Vehicle, for its acronym in English) has been one of the projects that has received the most funding from PEDID, with 30.6 million euros. The THeMIS, one of the first vehicles of its class, has already been deployed in some EU military missions, such as the one taking place in Mali since 2013.

The offensives using swarms of drones are already part of the present of air warfare, but the near future will see dozens or hundreds of these devices coordinating through algorithms to carry out their mission with minimal human interaction. USA and China They compete for technological preeminence when it comes to equipping this hive mind with the ability to control a greater number of drones. One of the 16 military projects selected by the EU to advance in this field is DRONEDGE-E, financed with about two million euros.

The project GEODE It is the most expensive of the entire EDIDP budget item, with 92 million euros in total. Its aspiration is to prototype and test receivers and antennas for military use with which to connect with the Galileo satellite navigation system, European GPS for civil use.

The French company MBDA, which claims to be “the only European group capable of designing and producing missiles and missile systems to meet the full range of current and future needs”, has been chosen to coordinate the project LynkEUs, which will develop a system of “high precision” missiles fired from the ground at targets “beyond the line of sight”. The person in charge of pointing and giving details of the target will be a drone. The development plan includes testing the system with “a large-scale firing campaign.”

Driven by The Left in the European Parliament, the study looks at the use of Artificial Intelligence in EU defense planning and examines the threats and impact that new AI applications pose, and how they could eventually make the international law is meaningless.

The study was presented this Friday, and its author, Christoph Marischka, reveals what role Artificial Intelligence has played in various EU weapons programs (PEDID, EDF and PESCO), and the political consequences of community militarization. In particular, the report looks at how the use of Artificial Intelligence has deepened significantly since the turn of the century.

Author Christoph Marischka adds: “What worries me is that a lot has already been done in the field of digitization and artificial intelligence in the military, both in Germany and in the EU. Furthermore, the EU’s weapons policy means that autonomous and unmanned systems will be used in large numbers and often in swarms on land, air, sea, space and cyber in the future. By actively promoting this development, this will change the nature of war and our daily lives, thus increasingly blurring the distinction between conflict and peace. ”

MEP Özlem Alev Demirel (Die Linke, GUE / NGL), coordinator of the report, said: “The use of autonomous systems and increased militarization have greatly increased the potential for war. The escalation of weapons does not just mean swarms of killer drones and robots, but threatens to undo the difference between war and peace, civilians and combatants. The risk of a gradual loss of control is real. So international law no longer makes sense. The use of AI in weapons not only threatens peace, but will also usher in new forms of surveillance and propaganda, making conflicts more likely, “he concluded.

In recent years there has been a significant increase in the use of artificial intelligence (AI) in the modernization of armed forces around the world. In Europe, the report explains, the application of Artificial Intelligence in militarization is far-reaching. Over time, they have come in the form of increasingly autonomous systems, “with ever greater consolidation of descriptions of the situation and acceleration of the war.”

“To understand the EU’s defense strategy,” the document explains, “we must go back to 2003 when, for the first time, the EU Council adopted a joint foreign policy strategy to redefine the EU not just as a global player, but also as a military power. “According to the Lisbon Treaty, the study states, the focus on artificial intelligence and the use of its applications has accelerated as part of the EU’s defense policy. Hence the Strategy EU global policy for foreign and security policy in 2016, which eventually led to the establishment of a separate EU arms budget and the strong promotion of joint arms projects.

However, the study warns that Article 41 of the Lisbon Treaty “explicitly prohibits EU funding for operations that have military or defense implications.” This has not prevented the EU from circumventing the rules with extra-budgetary instruments, such as the European Peace Fund, or through intergovernmental organizations outside the EU such as PESCO (Permanent Structured Cooperation Programs), which is financed through budgets. arms of the Member States.

In 2021 the European Defense Program will enter into force, the first EU program explicitly dedicated to Defense and Security. Some € 13 billion has been set aside from the EU budget for 2021-2027, “money that should and could have been spent on civil projects and public services, which have been neglected after a decade of austerity and now COVID-19”; the document states: “EU money has been filling the coffers of arms companies since the then President of the European Commission, Jean-Claude Juncker, launched the European Defense Program in 2016. That same year, the Agency European Defense launched a 1.4 million euro pilot project that supported three activities, all related to artificial intelligence through extensive civilian research, but they were carried out within explicitly military facilities. ”

Following the pilot plan, an additional € 90 million was allocated for the Preparatory Action on Defense Research project. One of the main pillars of this scheme was “the launch of a complex project” that was expected “to show the added value of unmanned systems to improve situational awareness”, the investigation relates.

In this sense, The Left in the European Parliament calls “to stop this mad arms race” and calls “on all the EU institutions to devote all their energy to regulating autonomous weapons systems and cyber warfare. Society’s campaigns against the use of artificial intelligence in military and defense projects, such as Cyberpeace and Stop Killer Robots have provided important projects, and their voices must be heard as the EU moves dangerously and recklessly into a state of permanent war “.

“The current EU weaponry driven by digitization and artificial intelligence represents a threat to the citizens of Europe,” they state: “The EU’s obsession with digitization ensures that large companies and corporations win while promoting the creation of a ecosystem in the field of artificial intelligence, which uses the results of research (financed with public funds) for military purposes, commercializing them with the help of venture capital. Consequently, the public sector should invest in technological research and facilitate the creation of companies through financial support and deregulation of labor and tax legislation. ”