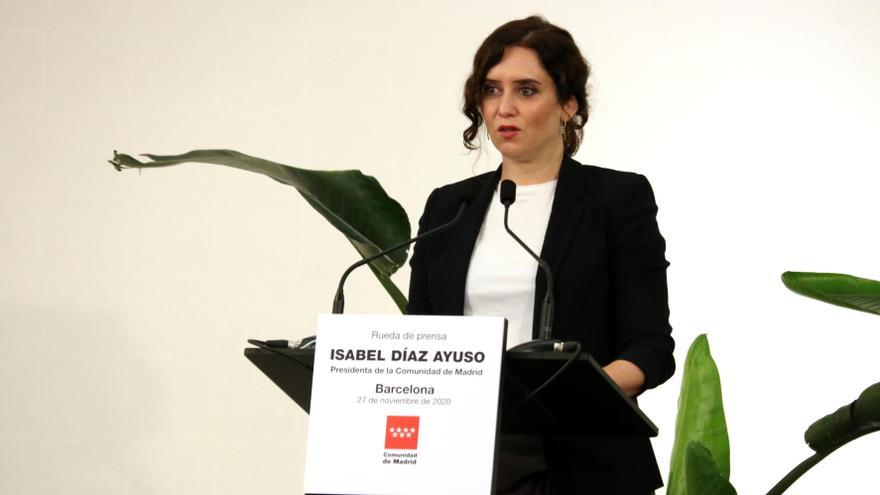 The president of the Community of Madrid, Isabel Díaz Ayuso, ended her two-day visit to Catalonia on Tuesday to contrast her policies with those of the Generalitat and set a profile in the face of the budget pact reached by the Pedro Sánchez government. In a tour which has led him to meet with students, businessmen and associations of parents of students who vindicate Spanish, Ayuso has defended his fiscal policy and his commitment not to close the restaurant during the second wave of the pandemic. “Catalan society can no longer,” he summarized, “the division and fracture are undermining everything here.”

Ayuso has acted as battering ram for the PP offensive to capture the voter discontent with Ciudadanos en Catalunya and at the same time trying to erode the central government. The polls predict a strong hit by the orange formation in the next Catalan elections after having won the last regional elections held in December 2017. Some polls predict that the Arrimadas party could lose up to half of the 36 seats obtained three ago years and the popular have decided to pour into the community. While Ayuso was speaking in Barcelona, ​​Pablo Casado arrived in Reus (Tarragona) to visit the Food Bank.

Ayuso has assured that it is a “farce” that the Community of Madrid makes fiscal ‘dumping’ with respect to the rest of the communities and has attributed it to a “disproportionate attack” of the pro-independence formations before the budget debate. “It will be difficult for socialism to explain to the owner of a store in Argüelles that taxes are being raised because politicians who have impoverished the economy of Catalonia say so,” he said in a press conference in which, again, elDiario. it has not been able to ask the president of Madrid. “Madrid is a paradise, it is true, but it is a paradise of freedom”, he added.

Ayuso has defended a fiscal harmonization at the national level, as long as it is to lower taxes in the rest of the communities. “Madrid was not always the first economy, but as we lowered taxes we went up,” he explained. “For every 13 taxes typical of Catalonia, Madrid has only two”.

Attack on the closure of the restoration and linguistic immersion

The other flanks of Ayuso’s attack in Catalonia have been the closure of the restoration by the Generalitat and Catalan linguistic immersion in schools. Despite the fact that the Community of Madrid has a higher mortality rate than Catalonia, Ayuso has affirmed that the criterion of closing the restoration in Catalonia was made under “questionable health criteria”. The Madrid president, who has met with different restaurateurs in Barcelona, ​​believes that the Generalitat has harmed the economy “unnecessarily” by decreeing the closure of the restaurant, which remained with the blind down until last Monday.

After meeting with associations of fathers and mothers who defend education in Spanish, Ayuso has promised that they will support them from Madrid. “The concerted school has explained to us that the Celaá law has been in Catalonia for a long time,” said Ayuso, who stated that there is an “attack on Spanish” in Catalonia. Asked if she had had any problems during these days in Catalonia because she did not speak Catalan, Ayuso answered that she had not and that she felt “at home”.

The president of the Community of Madrid has refused to meet with any Catalan authority during her visit. Nor with any representative of the Barcelona City Council. “This trip was to speak with Catalan civil society, to listen to them and draw conclusions,” he stressed. According to Ayuso, the “network of Catalan politicians” does not want to talk or think about the future. “We are not going to waste time with them,” he concluded.