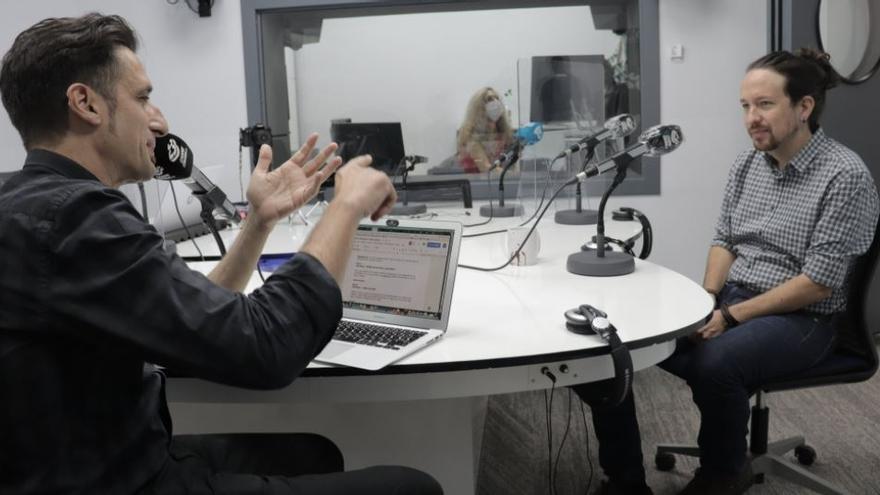 The second vice president of the Government, Pablo Iglesias, assured this Thursday that both ERC and EH Bildu showed him in separate meetings held on Wednesday their “good predisposition” to negotiate the 2020 General Budgets that the coalition Executive prepares. That “clear availability” of both pro-independence parties would allow, according to Iglesias, to rearm the majority of the investiture not only for the public accounts of next year, but for the rest of the legislature and face “social issues, the reconstruction of our country and territorial conflicts.” “It depends on the Government that there is a budget agreement that is settled in the majority of the investiture,” he assured.

Iglesias was interviewed this morning in Carne Cruda where he pointed out that he saw “a clear availability to negotiate the Budgets and to assume the tasks of the next few years” after meeting with ERC spokesman Gabriel Rufián, and those of Eh Bildu, Mertxe Aizpurua and Oskar Matute. From the meetings he obtained, he said, “the best disposition to negotiate and reinforce a difficult path, which has taken many years and which resulted in a motion of no confidence and the inauguration of the first coalition government of democracy, which has broken an exclusion clause that has lasted 80 years, “he said.

The leader of United We Can has stated in recent weeks that, beyond taking the accounts for 2020, the coalition government has the opportunity to consolidate an alliance that allows defining “a State direction” for the coming decades. That was, as he has said, the counterpart offered to ERC and Bildu, which would translate into “sharing a historical sense of state direction“.” The Government is not autonomous when it comes to defining what is going to happen in this country, “he said after recalling that the PSOE and its group have 155 deputies.

“This is concretized in that the tasks, probably unprecedented, of reindustrializing the country, of assuming the duties in terms of digitization, ecological transition and economy of care, places us facing the most important political and economic transition that our country has lived in 40 years, “he explained. To settle:” We cannot build it alone, we have to do it together with political forces that represent many citizens of territories that have sometimes felt disaffection. ”

Iglesias has opted not to feed the controversy over the double round of contacts that the Government has established, with the first vice president, Carmen Calvo, on the one hand, and himself on the other. The leader of United We Can has defended the existence of such meetings as “democratic normality”. “We are a coalition government, with different approaches. Everyone is aware of where each one is going. The logical thing is that we can meet with the parliamentary groups. In a coalition government it is perfectly normal,” he said.

Regarding the possible participation of Ciudadanos in the agreement, Iglesias has considered “unimaginable” that there are “great agreements with whoever configures a governance bloc with the extreme right.” “That is practically impossible. Pedro Sánchez said that Ciudadanos is in the photo of Colón and governs in Madrid and Andalusia with the support of the extreme right,” he recalled, to reply that “transversality is not to agree with the right, it is not to reform with night the Constitution with the PP “. Transversality is that the consensus that exists in the street, on the precariousness or the Dependency, become reality “.

Iglesias has not wanted to speak of a “veto” to Citizens, but he did remember that the PSOE and United We can add more deputies than the PSOE with Citizens. An idea that andthe spokesmen of Podemos expressed in a press conference that served to modify the story on the Budgets. After her, Sánchez and Iglesias agreed on a negotiation methodology that, according to Iglesias, makes it very difficult for Citizens to intervene in the Budgets.

The vice president has avoided entering the content of the project, which is negotiated by the Minister of Finance, María Jesús Montero and the Secretary of State for Social Rights, Nacho Álvarez. But he did say that “there are going to be elements of tax justice that those who have been advocating for more redistribution for years will like.” “It is a mandate of the coalition agreement that the president and I signed,” he concluded.

Who has also spoken this Thursday about the Budgets has been precisely Carmen Calvo. The first vice president has said that the importance of budgets are the contents, before the pressure of Iglesias to agree with the allies of the investiture. Calvo, without mentioning the Government partners, has lamented that “there are too many people moving on the surfaces.” “Some are in the previous debate of things and that is why I tell them first budgets, second the contents,” he said on TVE.

The pandemic in Madrid

The second vice president has also addressed the difficult situation in the Community of Madrid, where the rebound of Covid-19 is pushing the healthcare system to the limit again, although he has avoided confronting the government of Díaz Ayuso. “The Government and the Autonomous Communities cannot lower our guard,” said Iglesias, who argued that, despite concerns about data, the impact “in March and April was much greater.”

Questioned about Madrid in particular, Iglesias has acknowledged that “the situation seems more difficult” and that “what has to be done is to put all the necessary means to avoid a repeat” of what happened last spring. And he added: “It is not my turn to oppose the Government of Madrid. I have to offer all the collaboration, everything they need, to manage a situation that generates a lot of concern. You will not hear anything that sounds like a threat or harsh words. They can count on the full collaboration of the central government. ”

“It is time to give full support to the competences of the Community of Madrid”, he pointed out. “The worst thing that citizens can listen to is the managers throwing away the junk”, he assured. Iglesias has argued that “citizens are smart enough” to determine what is happening and whose responsibility may be.

Tags: agreement, be there, budgets, churches, government, It depends, legislature, MOST, nods, Paul