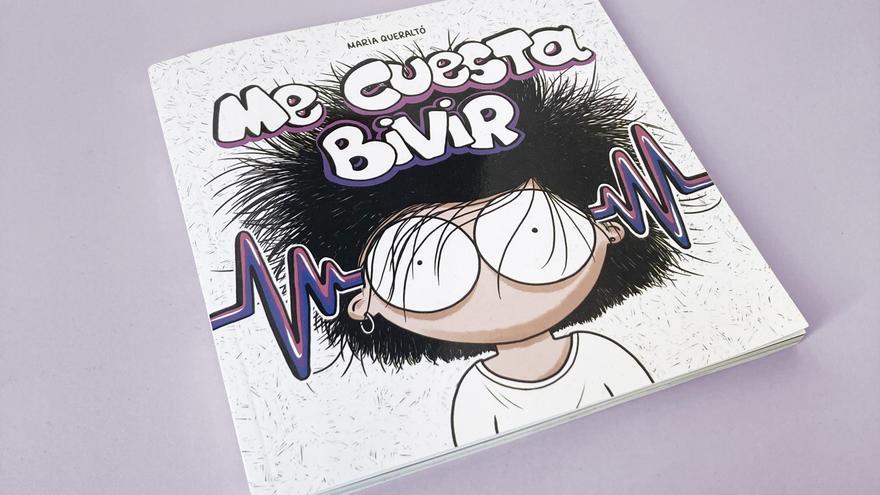 On January 27, 2021, the following WhatsApp audio travels from Sants to Poble Sec (Barcelona):

«Hello, I'm here with your wonderful fanzine, I'm sending you audio, I hope you like it (...) Please, the cartoon of the Ministry of Monosexism, hahaha, it's great! (...) I'm dying of loveooooorrr, noooooo (...) Oh, María, the vignette of the impostor syndrome, could she be more tender? I mean, all this is so real... man, I'm freaking out with this fanzine, really, I'm not just saying it, it's incredible».

It is very difficult to express the journey involved in reading the graphic novel It costs me to bivir (Melusina) for a person who, like me, is used to the essay format and to have everything well argued and justified. This first review that I did without knowing it of the author's work, in crappy audio format, tried to convey to her the cocktail of emotions that I felt when reading the first draft —which I was lucky enough to receive first— held back by the fear of harassing my enthusiasm to a person who was becoming a friend. Fortunately, I did not manage to scare her and today I am lucky enough to be able to go through and sort out a bit those sensations that I have felt again when rereading it now, for the umpteenth time, a year and a bit later.

Me costs bivir is the extended version, in graphic novel format, of the self-published fanzine Me costs bi-vir, published in 2021 and selected for the Pichi Fest fanzine festival that same year. Its author, María Queraltó, began to prepare the draft from loose vignettes that she had been outlining during the unspeakable year of the pandemic, as a way of venting about her own process of coming out of the closet as bisexual. In the final version of it, we follow the protagonist on a journey that goes through four key phases: introspections, closets, biphobias and activisms. Following this structure, Queraltó manages, in a way that is as tender as it is fun, to condense into short vignettes situations that are difficult to unravel and thus tell us her story, which is the story of many more.

In one of the vignettes, the protagonist hears about bisexuality and thinks: “Could it be that...? Nah, I'm too in the shit to be that cool." Maria has such a sarcastic sense of humor and she is so capable of hitting the nail on the head by laughing at her own fears and inconsistencies that it is impossible not to feel that something heals you inside. It is impossible not to get hooked, keep reading and feel that we can not only relieve what once hurt us, but also revisit it with humor.

Throughout the reading, the stigmas of biphobia appear in the mouths of both the protagonist and those around her, while the damage they can cause is shown, making us understand that, even with the best intentions, we can delay coming out of the closet. a bisexual person. And therein lies the secret of this graphic novel: the author does not try to teach a lesson, it is a generous and honest narration of how her process has been, without trying to universalize it, although for many of us it is a mirror image of our own experiences.

One of the most valuable elements of this reading is that in the story the protagonist does not get involved with anyone. In other words, the story narrates the process of recognizing oneself as bisexual without going through the process of internships. I was going to apologize for the spoiler, but I think that the impulse to do so is, once again, a reflection of the prominence that we always give to sexuality, which seems to have to be the backbone of any story about sexual and affective diversity. This, which the asexual group is tired of repeating, is of vital importance applied to the bi, given that one of the forms of violence that forms biphobia is hypersexualization.

You just need to listen

In fact, many of us still fall into clinging to our sex-affective practices to "demonstrate" our identity. I have hardly read LGTBIQA+ themed books (including politicized ones, and I would dare to say especially those) that did not treat them as a turning point, as a rite of passage, as the inevitable end of the identity process or as a moment of verification: now that I have tried it, I can now name myself with complete certainty. It costs me to live reminds us that the answer is not necessarily in the practices. We just need to listen to ourselves, pay attention to how our body responds in certain situations, something so terribly simple that it hurts to think how difficult it is for us in this capitalist context of immediacy, competition and measurement of what one is based on external comparison. and not from the visceral thermometer.

This book is a gentle reminder to return to whenever I need to, a small valley of calm for when we forget that the certainty of who we are lies in the body, no matter how much talk one tries to take refuge in. I wish I could have read it years ago, while I was lost in articles and books to explain what was happening to me, like that meme of the crazy man with the cork full of newspaper clippings joined by red threads. This book, beyond bisexuality, ultimately deals with emotions and the importance of being in contact with them.

However, all this journey can be very hard if you do it alone. And the protagonist, who again could have fallen into “well, I'm looking for a girlfriend and let's go”, finds this accompaniment in the collective. In a few vignettes, the author decentralizes romantic love, unravels complex emotions, portrays the importance of activism, sends a love letter to her friends and, when she is already having a tear, she makes us laugh again. For this reason, it is there and not before when the doors open to do what was so scary: arm yourself with courage and tell someone "I like you".

It costs me bivir is a place to return to in moments of saturation or loneliness, to gently transport you to the starting point and remind you that everything is simpler, that we do not walk alone, that we will be fine.