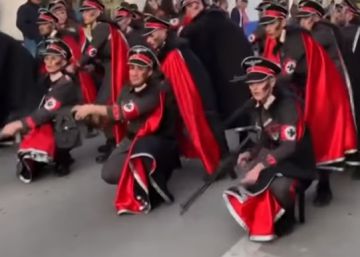 The Israeli Embassy in Spain has shown its condemnation and disgust for a carnival parade that has paraded by Campo de Criptana (Ciudad Real) for understanding that banalizes the Holocaust and makes “mockery of the six million Jews killed by the Nazis.” The parade of the aforementioned troupe, of the Cultural Association El Chaparral de Las Mesas (Cuenca), nevertheless intended to honor the victims of extermination and remember “one of the most dishonorable events in the history of mankind”, making parade people disguised as Nazis and others from Jews from the extermination camps to the sound of disco music, reports Europa Press.

Israel’s protest has been spread on Twitter by the spokesman for his diplomatic legation in Spain, Yoav Katz, in whose message he also claims that European countries are actively fighting anti-Semitism. The embassy has indicated that it is in contact with the local City Council to try to obtain an explanation about what happened.

We condemn the vile and disgusting representation banalizing the #Holocaust at the Carnival of Campo de Criptana, making fun of the six million Jews killed by the Nazis.
European countries must actively combat the #antisemitism!https://t.co/9UZwU5UyF8

The troupe in question is that of the Cultural Association El Chaparral de Las Mesas (Cuenca), which has posted on its Facebook page a photograph of the float they carry in their parade. On it you can see a poster “in memory of the six million Jewish men, women and children who perished in the Holocaust” and those who suffered “persecution and extermination because of their race, sexual orientation, religion, ethnicity or political ideas”. “You will always be in our memory,” he adds.

Already in January, the association had advanced on this same page that its intention with its assembly was to honor the victims of extermination and remember “one of the most dishonorable events in the history of mankind.” “Not remembering it will not make it not happen. We present this issue as a mere historical fact, without pretending to make any kind of political allusion, or that could be offensive or hurtful for someone,” he said then.

The controversy over this parade comes only a few days after the carnival of the Belgian city of Aalst paraded a group disguised as Nazi officers and the sources consulted fear that a tendency to make fun of the Holocaust in carnivals will begin in Europe. The Belgian event prompted the protest of the director general of the Israeli Ministry of Foreign Affairs, Yuval Rotem, who crossed out the representation of “despicable anti-Semitic exhibition”. “One can only wonder if the lesson of the terrible fate of Belgian Jews has been learned 75 years ago,” he wrote on Twitter.