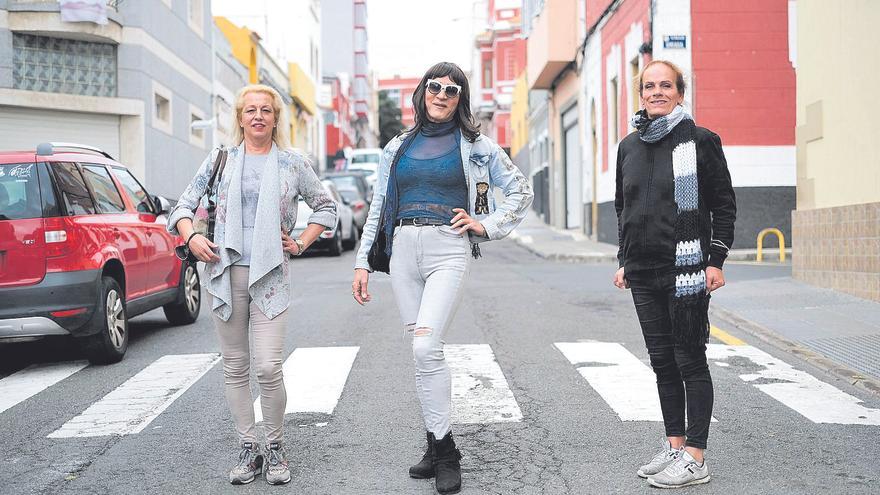 Patricia Rivero never knew her aunt Andrea. In principle, this would be one more piece of news within the unfinished genealogies of the family tree, but the silence weighed heavily every time he tried to know something about her. She was a trans woman, born in 1962, when the challenge was not to end up locked up by the grays of the Franco dictatorship. The beatings of the police stations, together with the rejection of society, made him find an alternative path: La Isleta. There were her equals. There, Margaret García Herrera, Lourdes Coello Álvarez and Marián Pérez Segura were waiting for herthe protagonists of Isleteñas, the documentary that pays tribute to the capital's neighborhood as a sign of resistance and battlefield and welcome of the LGTBI collective.

But, back home, the adoptive family tucked them in. An essential ritual was the baptism that gave them their female names. "La Isleta was always different," says Lourdes. The older ones sprinkled the heads of the newcomers with whatever they had at hand, even picón, and they were left with the name they came up with. "The girls were lucky, but there were some who called them anything, and the older ones also tried to scare them away so that the police would not stop them when they were hanging around their area.. It was a way of taking care of each other: they all criticize each other and they all adore each other," says Rivero with a laugh.

The Isleta was the cradle

In the cafeteria of La Madera de La Isleta, the protagonists and the director were chatting every week in May of last year. The anecdotes came and went, with the lively spirit that recounts the harsh experiences, knowing how her parents had to get the minors out of the police stations where they were detained for painting the line in their eyes. Over the phone, Marián remembers the beatings afterwards, but above all the terror of waiting, "the girls who were older than us mutilated themselves so that they would be sent to hospitals from the police station because, if not, they would end up in the prisons for homosexuals in Huelva". Lourdes was smacked in the face for wearing makeup and, backed by the system that operated under the Law of Vagrants and Maleantes, the police rounded them up and He took them to the ravine of La Ballena to make them run, at night and barefoot in their heels, in the blackness, leaving them lying there.

Youth, divine treasure, was full of hope and energy. "We had more face than back, so we kept going," says Lourdes, and links to what Margaret says, "we had our ideas and we knew what we were like: we went against the system and society that only wanted women to stay home and the man went to work. Among the grayish tones, the light of the shows where they made art under the spotlights could be glimpsed. They started in the now-defunct Britania room, by Fernando Guanarteme, and falsified IDs to be allowed in. Inside there, they played Cher or Gilda and, later, they came to tour with Paco España and in different cabaret companies with which they toured the peninsula, its towns and squares"She was very multifaceted, she sang to you Don't cry for me, Argentina and then she went comical," Margaret winks.

One of the film's complaints is the economic instability that these women face. Nowadays, unions estimate that trans people suffer from an unemployment rate in Europe of between 85% and 90%So, forty years ago the obstacles were insurmountable. Lourdes exemplifies it: "I worked 20 years in the south, but after two months they offered me unemployment or to continue in B, besides, the show was not enough, so we had to prostitute ourselves to be able to live". Discriminated against because of their condition, those who hired her did not insure them and now, hopefully, they only have the option of the Minimum Vital Income. "We work everything without contributing," Marián clarifies.

All three are around that magical age between 50 and infinity. They do not regret anything or regret what they experienced, "although there are things that are to cry, but I laugh," says Margaret who remembers how she used to sing to Marisol with a scarf on her head in her childhood. They live surrounded by the affection of their loved ones and agree on the advances that the group has obtained, such as the approval of the Trans Law in June 2021. A social recognition that they did not obtain, but that they do not regret either. "We live in a wonderful time in the 80s and we open many paths to those who come after", says Margaret, who is an activist in Gama. If they were left with a message for the future, Lourdes is clear: "There is no need to prejudge, there are those who still call trans whores or thieves, and that has to be left behind".

Andrea would die in 1994 at the age of 32 due to AIDS, but Patricia feels connected to her aunt over time. The challenge of the documentary is to spread a message of perseverance and struggle to maintain the rights of the group against those who threaten to destroy them, while the past is restored. "I feel like a token fits better inside of me. My intention is that the three have a decent old age and I would love to put on a play with them, they have cane and flipas, and, above all, that history is known so that new generations know where they come from, "says the director . La Isleta is proud of her daughters.

The capital of Gran Canaria has several icons of the group to its credit, such as the president of Gama, Montse González Montenegro, who fought for her rights regardless of the obstacles and penalties of society. La Isleta was different, so much so that the protagonists say that, on occasions, the neighbors would open the doors of their houses if they saw the police so that they would quickly hide in their homes and escape the violence. After the Stonewall Riot in 1969, the morning paper The Echo of the Canary Islands would publish for the first time on the cover, at the beginning of 1976, the photograph of a kiss between two men while the first lesbian kiss was not captured by the Efe agency until 1986.