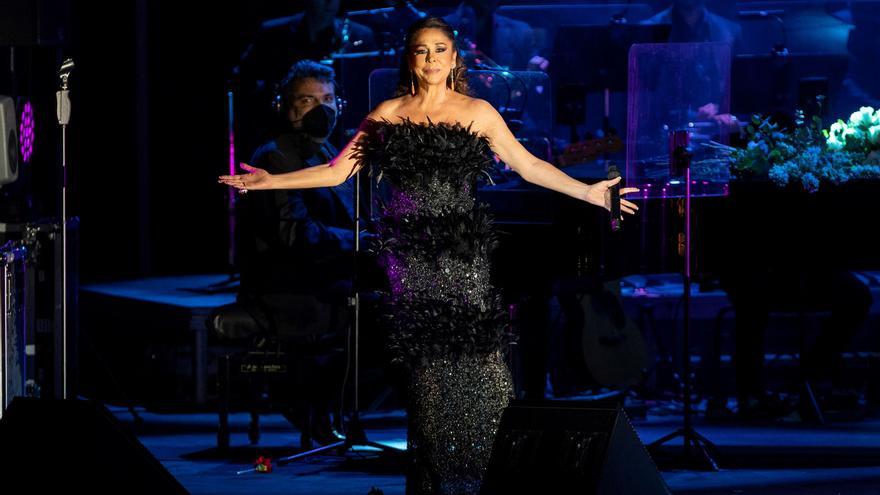 Jerez de la Frontera (Cádiz), Aug 8 (EFE) .- Isabel Pantoja has fallen in love with the public with the Tío Pepe Festival in Jerez de la Frontera, in what has been her reappearance on stage after more than a year away from them due to to the pandemic, and has shown that he has plenty of desire and voice to continue taking the song to the top.

During the two and a half hours of concert, the tonadillera has shone with her powerful voice before a devoted audience that has not stopped applauding and supporting the artist.

Ten minutes before the start of the show, those present began to demand the presence of the interpreter with applause and “clapping from Jerez”, eager to see the tonadillera again after so many months of absence, and it is that her reappearance on the music scene It was one of the most anticipated at this festival, which has almost completed its capacity for this concert.

As soon as she appeared on stage, the audience received her standing up and with a standing ovation that moved the artist before even singing the first note.

Isabel Pantoja has come out on stage in this way supported by the attendees, whom she has not hesitated to thank “from the heart” for their love and constant support.

The concert began with the sounds of “Virgen del Rocío” to continue squandering talent and voice with the well-known “Today I want to confess”, a whole declaration of intentions that has started once again the applause of the public and the shouts of “Isabel, Isabel”.

The tonadillera appeared at this Tío Pepe Festival with great expectation and surrounded by controversy over the recent legal battles he has with his son Kiko Rivera over his father’s inheritance, for that reason, he has stepped on the festival stage to remake himself with themes that are part of of his long career.

“This is like a beautiful private party. We are who we are and who we have to be,” he told the audience at one point during the concert.

“Marinero de Luces”, “Hallelujah” and “It was my life he”, have been the following songs from the repertoire that the folkloric has prepared for its reappearance on this Jerez stage.

The artist has not avoided the family controversy that surrounds her and at one point during the concert she addressed those present to defend that before when they took photos of her many “friends” came out with her, now, she has sentenced, “I go out with those who they have stayed, with the real ones “.

Isabel Pantoja has also spoken through the lyrics of her songs and on stage, with songs like “This is my life” from her latest album, or “It was my life he”, in what seemed like a message addressed to her son .

Almost in the middle of the concert, with a standing audience unable to remain seated before the waste of talent of the artist, the singer has asked for calm and that they remain in their seats.

“I know that you love me and that you are here to have a fun time with me, because we know that music gives the joy we need at this time”, thanked the tonadillera in one of the few words he addressed to the fans who filled the Las Copas de González Byass winery.

“My soul falls in love”, “What am I going to do with you” and “So it was” have been the songs that have caused the most animation among the public and have caused countless applause among them.

“My soul falls in love, here in Jerez”, has finished the folkloric to the delight of an audience totally devoted to the charisma of the Pantoja, who has performed the last part of the concert accompanied by a flamenco group and putting the final touch to the rhythm of the well-known “El moreno”.

The last time the artist stepped on a stage was on March 6, 2020 in Madrid within her ‘Fall in love Tour’ tour, a week before the state of alarm was decreed in Spain. A concert attended by approximately 11,000 people.

In Jerez, and before almost 2,000 people, Isabel Pantoja has made it clear that she continues to “fall in love with the soul” of those who come to see her at her concerts, to whom she has not stopped thanking them for their love during the more than two hours of the show.