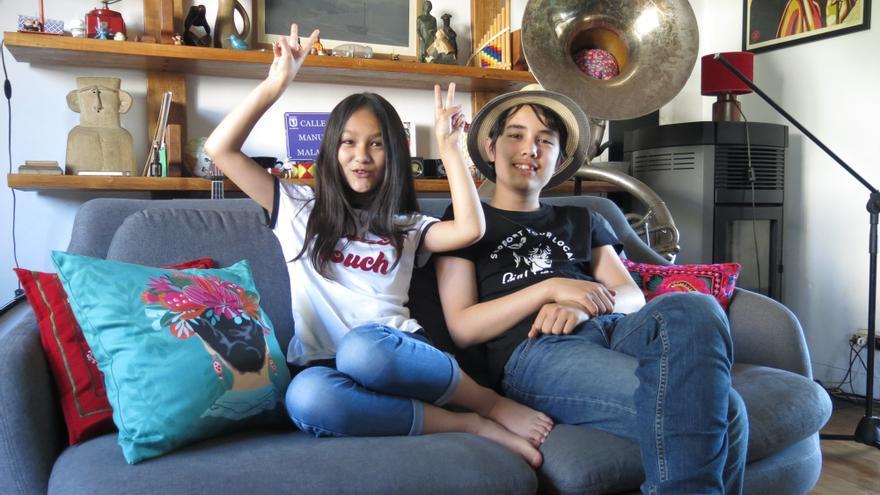 Quimper (France), Jun 16 (EFE) .- Two years ago an improvised recording of the habanera “Veinte años” made them a viral phenomenon, but unlike Buena Vista Social Club or María Teresa Vera, these singers only have 10 and 13 years old, a young age at which the French Isaac and Nora have already released their first album.

Since 2019, their videos have added millions of views and have about a million and a half followers on Facebook, conquered by the sweet voice of Nora, the sound of Isaac’s trumpet and the accompaniment of his father, Nicolas, who has transmitted love to them. by the classics of Latin music.

The last song is “Hasta la Root”, an adaptation by the Mexican Natalia Lafourcade, published in a video clip this Wednesday, which is a more modern introduction to a repertoire full of tributes to Violeta Parra, Julio Jaramillo, Facundo Cabral, Luis Demetrio, María Teresa and Agustín Lara or Manu Chao.

“Our first song in Spanish was ‘Lágrimas Negras’. ‘Twenty years’ was just a rehearsal in the garden, we hadn’t worked on it much. Then we uploaded the video to YouTube and it was very successful,” says Nora, who has just celebrated her 10 years, in an interview with EFE.

Although they do not speak Spanish, they have improved it thanks to the songs: “We look at the lyrics, we look at how the singer pronounces and then we try to do our best,” says Isaac.

The boys, who live with their parents, Nicolas and Catherine Restoin, in a small house in Quimper, southern Brittany, have managed to move many strangers from a culture other than their own with the most significant melodies of Latin music.

Nicolas, born in South Korea, was adopted at the age of four by a French couple, he is not related to his native country and confesses that he is attracted to this music by its melody, its joy and the good vibes it transmits.

“They ask us a lot why we sing Latin songs, it’s as if you ask someone who is not Asian why they eat sushi all day, because they like it!”, Says Nicolas, whose role in the duo is to accompany the guitar while Catherine records and they both choose the songs.

Isaac started playing the trumpet when he was seven years old, when his father and his friends got together to listen to music and play, like good music lovers. Nora, four years old, also wanted to participate and, in the absence of an instrument, they asked her to sing.

Now he covers his face with shame when they put on that video in which he interprets a popular Jewish song and, with his toddler voice, he makes freaks from the foreground.

“I think people like our naturalness about us,” says Nora.

Because no matter how professionalism they have added in recent years, with studio recordings and collaborations with established groups such as Fetén Fetén, their strategic decisions respond to intuition and the ingenuity with which they try to compensate for their shortcomings.

This triumph has not blinded what was from the beginning a way to have a good time with the family: Catherine and Nicolas rejected the wave of proposals that followed the success of ‘Twenty years’.

“We distrust the toxicity of the ‘star system’, especially with children,” confesses Nicolas, who after recording an album on his own in 2020 to give as a family souvenir, last summer accepted a proposal from the music agency Madame Vaudeville, whose project seemed more related to him.

With it, they have just released their first album, “Latin & Love Studies”, eleven hits of Latin American music, some of which already have a video clip version, showing the giant steps they have taken in just one year.

Nicolas and Catherine try to excuse themselves to fans who applaud having given their children a special education or turned their attention to more traditional music.

“We are normal parents and they are normal children who when they come home from school want to play with the screens. We wanted music to be something that they enjoy and do in a playful way”, explains Nicolas.

In February of this year, they traveled to Madrid for the first time, where they have already spent several stays to record songs, and they plan to do a small tour in Spain and another in Latin America next year. A good opportunity, also, to perfect your Spanish.

Immersed in the recording of a second album with original songs and in the preparation of their show, the children talk about their musical tastes.

Isaac is more traditional, he is attracted to old music, rumba and rock, while Nora, a fan of South Korean groups BTS and Blackpink (whose language no one speaks in the family), claims to be more modern.