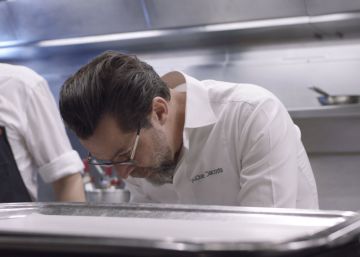 Starts Cook beauty and the writer Rosa Regàs says before the camera: "There is beauty in many places and they are all different." At the moment, the philosopher Javier Gomá It affects: "Legitimacy comes from consensus." And a little later, the painter Luis Feito he adds: "Gastronomy in his minor art". Everything fits in Cook beauty, a documentary by Sergio Piera led by the cook Quique Dacosta – with three Michelin stars in his restaurant in Dénia – and the creative advertising Toni Segarra, which brings together a powerful group of thinkers and creators who reflect on the concept articulated in the title and on art. On the screen, in addition to those mentioned, they appear as Miguel Adrover, the theater director Lluis Pasqual, the writer Luisa Castro, the artist Juan Genovés, the tenor Juan Diego Flórez, the mathematician Carlos Frabetti, the choreographer Sol Picó, theorists of the art and museum managers Vicente Todolí, Marta Arzak and Guillermo Solana, music producer Ricardo Pachón and the bullfighter Luis Francisco Esplá. The conversations speak of ephemeral art, of the necessary of the intellectualization of an object so that it is art with capital letters … Gomá points out the jump "from the taste to the knowledge, from the physiological to the philosophical".

And there is still more. Cook beauty open the debate to any art and not just the gastronomic offer. He looks for a minimum common element, like the one Feito brings when he says: "Everyone talks about art, but nobody knows where it is. For me, art starts where the painting ends." Esplá delves into that definition: "The artist is alive as long as he continues with his longing", he adds before, unwittingly, drawing parallels between bullfighting and gastronomy, by speaking bluntly of corpses and religion, of how "this society has made abstraction of death. "

Off the screen, sitting in the lobby of the María Cristina hotel, Segarra and Dacosta chat about the film, which is screened in the Culinary Zinema section of the San Sebastian festival. The film ends with several ideas about the kitchens of mothers, the original flavors that mark the human being. "Of course, just as poetry is born from the first texts, which were administrative," says the publicist. "Of the subsistence these gentlemen [it indicates to Dacosta, like representative of the cooks] they have arrived at things that neither have to do with eating". The chef confirms: "You feed yourself because you eat something that nourishes you, but the first mission of that work is not to nurture. At least, in my case it is to communicate, because cooking is the tool I use to express myself. Food is my words , with them I build my phrases ". Segarra believes that this reflection is only happening in Spain, because it is the world leader in author gastronomy.

"The kitchen is the tool that I use to express myself. Food is my words, with them I build my phrases"

Dacosta appreciates the words and explains: "A rich dish, correctly executed, with exceptional ingredients, harmonic in itself would not enter my restaurant. I would not put it. That is not enough, I do not communicate with it." Maybe that reflection equals gastronomy with the rest of the arts. "Sure, but in the film you get this idea from the talk." Segarra says that each interview lasted an hour and a half, "and many of them had never thought if gastronomy was in the art world until that moment." Another doubt pointed on the screen is the role – neither or much – of the diner. "Because at first I should not take them into account, since the one who communicates is me"; underlines Dacosta. "However, my result is always edible, then I do think about it, and I don't cook inedible salted fish, which would be the absolute provocation."

Segarra takes the conversation to another field: "We also wanted to talk about whether the kitchen can play serious issues and abandon the seal of hedonism. Esplá helped a lot in that, as long as he respects the celebration of death for being a bullfighter." "It is that in these conversations," interrupts Dacosta, "the reflections are acts that reflect what we are and that is why a vegetarian like Frabetti says that contemporary cuisine is criminal and a bullfighter speaks of death and resurrection, of the dead body that gives him life to those who ingest it. " As the ad concludes: "This is not an advertising documentary about Quique, but he helps us in the narration. And many of the participants use culinary terms – as Pasqual says about the sofrito of the scenery – in their own activities."

Talking about beauty leads each creator to delve into their own activity. The word kitchen could be removed from the title. "Exactly," says Segarra, "because the beginning was the question of why we don't use the term beauty in taste. It's not the chefs who have to make the intellectual reflection on their art." As it is not fair that the intellectual is what gives value to the sensory. "In each discipline there are some theorists and some creators. Surely Rothko didn't think much about the theory of his painting," says the chef.

If there is an art close to gastronomy, this is dance. Because of its ephemeral result, because recipes and choreographies are not art, but that is achieved with its first execution. And the following may be mere repetitions "that improve or not the initial", confirms Dacosta. For the transmission of knowledge in both disciplines, orally until very few decades ago. "Sol Picó He gave us many ideas in this field, "recalls Segarra. And Dacosta comments:" The piece meets the objective, opens the discussion as in this talk, and I like that. "