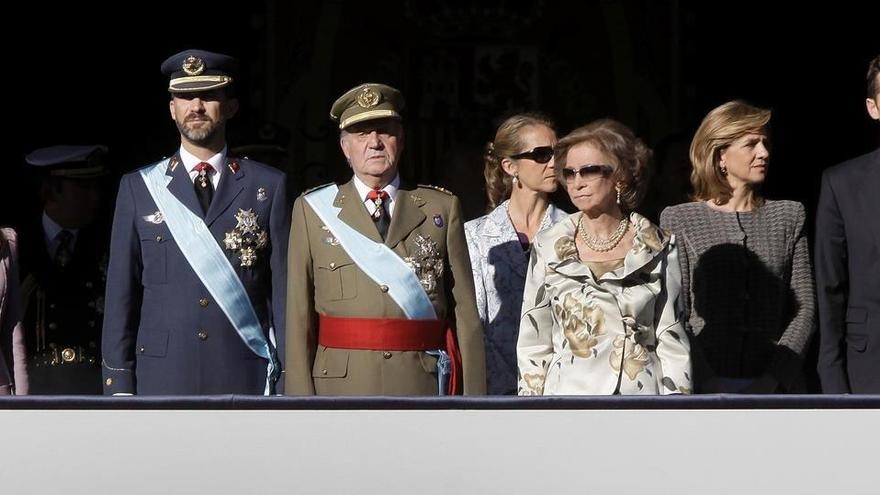 Since its premiere on Netflix in 2016, the series ‘The crown’ is the maximum representation of the ‘royal fascination’, that irresistible attraction to history and the affairs of the British royal family. An extraordinary portrait of the life of Queen Elizabeth II from her 1947 wedding to Philip of Edinburgh until the beginning of the 21st century, the series created by Peter Morgan has received the reverence of critics and the public, devoted to their general excellence, from the richness of its dramaturgy to the opulence of its production. It is true that the series suffers, according to its critics, from certain deviations from the documented history, especially in this fourth season focused on the relationship between Prince Charles and Diana of Wales. But beyond the necessary dramatic licenses of what is still a fiction based on real events, ‘The crown’ is a dazzling series that forces us to ask the big question: Would it be possible to do something similar about the Spanish royal family with the emeritus Juan Carlos as the common thread?

“The interiors of our royal family would last for several seasons”, says Luis Pliego, director of the magazine ‘Lecturas’, who, however, warns of the difference in charisma and popularity between the protagonists of British and Spanish history: “Characters such as Isabel II, Churchill, Diana de Gales or Margaret Thatcher they are universal icons of the 20th century that help the series work so well anywhere in the world. ” In Pliego’s opinion, “the recent history of Spain has had little interest outside our borders, so I imagine that hypothetical ‘The Crown’ less as a historical fiction and more as a story of palace intrigues, adultery and corruption “.

More ‘The Favorite’ than ‘The Crown’

Indeed, there are tasty ingredients to make a series about the Spanish royal crown something closer to Yorgos Lanthimos’s ‘La Favorite’ – that subversive portrait of palatial life in the court of Queen Anne Stuart of England – than to the sophisticated Netflix series. A monarch on the run after an unstoppable succession of corruption scandals; an express abdication after a catastrophic hunt in Botswana; a lover rewarded with 65 million euros from opaque accounts; a son-in-law behind bars for embezzlement, tax crimes and influence peddling … Pure lobster cream for an enthralling palace intrigue, peppered with less serious details, but no less tasty, like a commoner queen confronting her mother-in-law, the consort; or a skull nephew who can shoot himself in the foot while hunting with his father.

“The experience of the Spanish royal crown surpasses any ‘The crown’, says the writer and journalist Pilar Eyre, author of excellent approaches to the monarchy in books like ‘La soledad de la reina’ and the recently published ‘Yo, el rey’. Eyre affirms that there have been numerous attempts to “make a Spanish-style ‘The crown'”, but they have never been able to materialize: “Every month, more or less, independent production companies get in touch with me who say they are in contact with platforms to ask me advice or to intervene in any way. In the end they stop calling me and the project fades. ”

And what do you think is the reason that the interest is in nothing? “I do not know, but it is not difficult to guess: the life of Juan Carlos cannot yet be shown in all its rawness. Nobody is willing to take risks “, Eyre concludes. In this sense, Luis Pliego considers that, with the open debate in Spain about the present and future of the monarchy,” it would be difficult for someone to finance a series as expensive as’ The crown ‘with the Bourbon family. “Each season of’ The crown ‘has a monstrous budget of 130 million dollars. It is the most expensive series in history.

The bulk of fictions that have so far approached the figure of Juan Carlos or other relatives have been softened white line portraits. It is the case of the miniseries ‘Felipe y Letizia’ (Telecinco, 2010) and ‘El Rey’ (Telecinco, 2014) or the telefilms ‘Sofía’ (Antena 3, 2011) and ‘Alfonso, el principe maldito’ (Telecinco, 2010), dedicated to Juan Carlos’ cousin, the ill-fated Duke of Cádiz. Not to mention, this in the key of fiction, from ‘Leonor. The future of the renewed monarchy ‘, documentary produced by the magazine’ Hola! ‘ and premiered earlier this month on Prime Video. “It has always been a very courteous approach, trying to avoid any controversy and any complaint on the part of the royal family. In all those cases, the result was so candid that it bordered on parody. Halfway between a gag by ‘Polònia’ and a movie from Marisol, “says Pliego.

“In Spain it is still not possible to make a critical fiction with the monarchy on any television “, recognizes Alberto San Juan, author and director of the play ‘El rey’ -and its subsequent film adaptation-, a devastating portrait of the emeritus and the controversial role he played in the Transition. “The monarchy is the keystone of a system structurally traversed by corruption, of which they have participated in the last 40 years the PSOE, the PP and many of the Ibex 35 companies. These groups exercise their power in all areas; also on the different television channels or platforms. That imposes, therefore, limits to creative and informative freedom “, highlights San Juan.

In any case, the actor and Madrid director trusts that sooner or later the situation will change: “Now it is impossible, but I think that day will come. “no problem” to carry out his rebellious play-film: “20 years ago it would not have been possible, perhaps. But we must also bear in mind that its diffusion was rather marginal.”

Operating not from the marginal, but from certain margins far from the ‘mainstream’, the ‘XRey’ podcast has been one of the sensations during these months of pandemic. Written and directed by journalists Álvaro de Cózar and Eva Lamarca, the 10-episode Spotify podcast, is an exhaustive (and addictive) X-ray of Juan Carlos, with the participation of about forty testimonies among ‘plumbers’, historians and politicians. An exciting sound investigation that the producer Wekeend Studio (responsible for the series ‘Hache’ for Netflix) plans to turn into a promising television series, according to the specialized portal ‘Deadline’.

We will have to see the direction it takes ‘Una familia real’, documentary series about the Spanish royal house launched by Newtral, the producer of the journalist Ana Pastor, and the Mexican-Los Angeles studio Exile Content. As Pastor herself explained in the presentation of the project last March, there will be no lack of “scandals, the relationship between the different members of the monarchy and the role they have played on the political board inside and outside Spain.” Promising.

The ICHH invites you to donate platelets after the Christmas holidays