In the midst of the conflict between the central government and the regional executive, the Community of Madrid has published a series of graphics to show that the measures taken by the autonomous government were working to flatten the contagion curve. But is Madrid really bending the curve?

Although the data indicate that there has been a slight change in trend in cases and hospitalizations, the graphs published by the Community show a more pleasant image of the evolution of the situation in Madrid based on data from a few days and some unconsolidated. We contextualize the graphs published by the Government of Díaz Ayuso that have shown a triumphalist vision of the measures taken by the regional Executive.

The graphic of the Community of Madrid 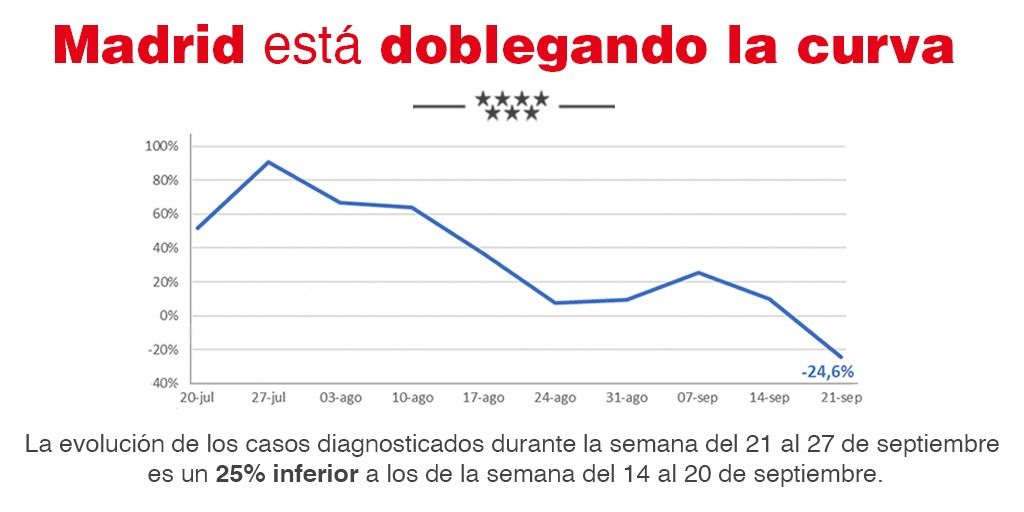 The graph published by the official account of the Community of Madrid does not show the evolution of cases but the percentage variation of infections each week. In other words, it shows how much the cases are multiplying with respect to those registered the previous week. For example, in the third week of August, 16,593 cases were detected compared to 12,095 in the second week: 36% more. In the last week of September, 20,206 cases were confirmed compared to 26,781 in the previous one: the decrease of -25% that stands out in the graph of the Community of Madrid.

But two limitations of these figures must be taken into account. The first, that the cases of the last week are not consolidated, since many cases that are reported late with respect to the date of diagnosis. Therefore, the data for that last week - from September 21 to 27 - are underestimated and lower than the real ones.

Second, the graph shows how much the cases are multiplying by compared to the previous week. It does not show the gross evolution of cases but the speed of reproduction of the virus. In this way, the graph gives the impression that today there are far fewer cases than in July or August.

For example, the 20,206 cases in the last week (an underestimated figure due to the delay in notifications) is still a much higher number of cases than that registered in the entire month of June, July and August. In addition, Madrid continues to be the region with the most cases detected per inhabitant in the last 14 days, according to data from the Ministry of Health, with a great difference compared to the rest of the communities except for Navarra.

The graphic of the Community of Madrid

Shows the percentage change in hospital occupancy over the previous week 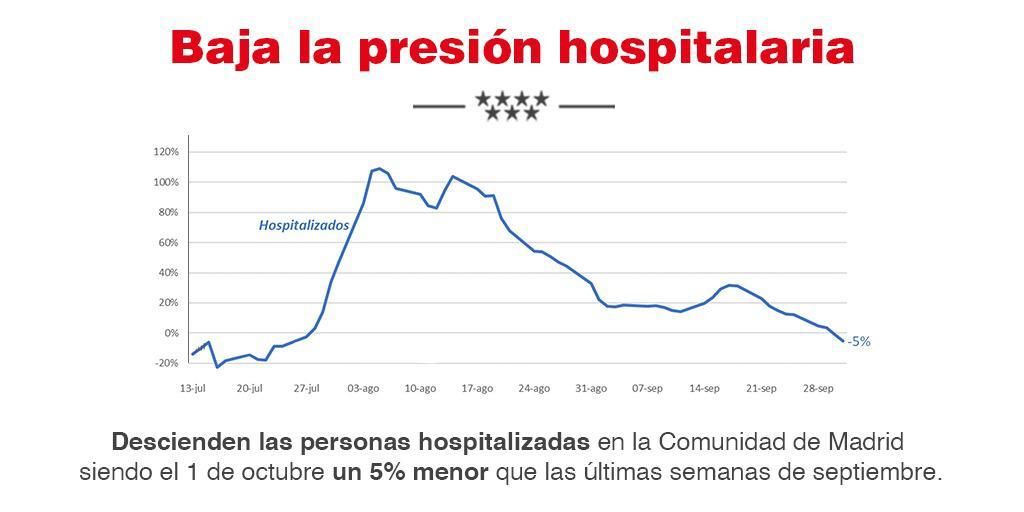 Like the graph of confirmed COVID-19 cases, it does not show actual occupancy but rather the speed at which beds are being filled or emptied in Madrid hospitals. For example, that 5% drop they include means going from 3,215 people admitted on September 24 as confirmed or suspected cases of COVID-19 to 3,025 on October 1, a week later.

Even with this small drop in hospitalizations, the numbers of people admitted to hospitals remain at the highest levels since the beginning of May. In addition, ICU admissions have not decreased and are at maximum levels since the end of the de-escalation. Currently, 493 people are admitted to intensive care in Madrid hospitals, according to the regional government's own data.

The figures on healthcare pressure indicate that the hospital occupancy of the Community of Madrid is the highest of all the autonomous regions, according to data from Health. Right now, 23.7% of beds in the region are occupied by patients with suspected or confirmed COVID-19. The next community with the most occupation, Castilla-La Mancha, does not exceed 14%.

With these figures, the pressure on the Madrid health system continues to rise. Hospitals are joining the saturation in Primary Care. In fact, since August 20, the number of hospital admissions for COVID-19 has more than doubled.

Hospital pressure in each CCAA

Comparison of the daily hospital occupancy at the end of August and today, by autonomous communities