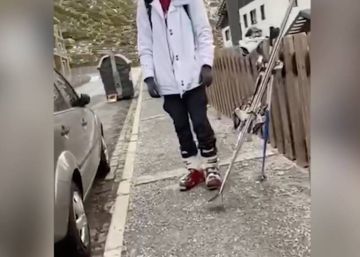 Since the quarantine began, social networks have been filled with videos of neighbors who, from their windows, record other people on the street doing running, riding a bicycle, walking as a couple or meeting in a park. These images are often accompanied by critical comments or shouts in which the lack of responsibility of passers-by is blamed for not obeying the government’s orders to stop the spread of the virus. But is this conduct lawful? Can what someone else does be recorded and broadcast, even if they are committing an irregular act?

The question is not at all simple. Experts warn that, although the purpose is to report the commission of an infraction, the truth is that recordings of this type may be contrary to our regulations “as long as the people who appear in the images are identified,” says Iñaki Pariente , former director of the Basque Data Protection Agency and now a partner in Dayntic Legal. The lawyer explains that, if the people portrayed are easily recognizable, their right to their own image would be violated, so they could file a civil lawsuit and demand compensation from the author of the video. On the contrary, if those that appear in the video are not identifiable, there are no protected rights at stake, “so it could not be punished.”

The exceptional situation generated by the declaration of the state of alarm also influences this scenario. Pariente recalls that the purpose of prohibiting the movement of people is none other than to prevent the spread of the virus. Therefore, those videos that help preserve public health, reflecting, for example, a crowded street or an exit full of cars, would be valid “as long as none of the people portrayed can be recognized,” he stresses. This type of images could also be replicated in the media, and “would be protected by the right to information,” adds the lawyer.

What if you can identify any of the protagonists of the videos? Given this scenario, Pariente points out that, if the commission of an infringement is really being reflected, the recording could not trigger a sanction “because there is an informative interest in the content.” However, this protects the media more than individuals, so it is best to bring the images to the attention of the police. In no case should be spread, stresses the lawyer, because, after all, “there is no legitimate interest in recording something to just hang it on the networks.”

In these cases there is another factor in dispute, and that is that the author of the video “does not always know if the person who is on the street is skipping the quarantine, going to make the purchase or to work”, clarifies Borja Adsuara, an expert lawyer in law digital. If the images were also disclosed, not only could the right of the person portrayed be violated, but also his right to honor, so that the compensation could be much higher.

Likewise, Adsuara explains that the amount of penalties is highly variable, making it difficult to set an approximate figure. Compensation for the right to honor will depend on the damage done by the images released and the scope of said propagation. On the other hand, the Spanish Agency for Data Protection can impose fines on individuals who process personal data of third parties (such as the image) without their consent. Even if the content is not broadcast on social networks. An example of this is the sanction of 4,000 euros that the body imposed on a man who took photos of several women on the beach, although he did not share them with other people.

Now, what if the person who appears in the recording skipping the quarantine is a person in the public interest (for example, a politician)? In this case, Adsuara explains that there would be more margin to record, since the content could be covered under the right to information. However, the lawyer stresses that this principle protects more clearly the content published by the media, and not so much that which is disclosed by individuals.