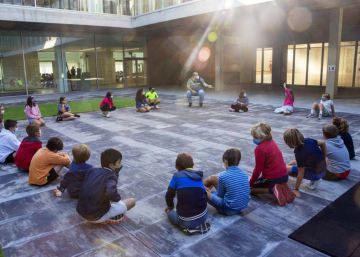 – “Do you think Aurora doesn’t study well? I asked him, confused.

– I think so, exactly. He does not know how to study.

“But he gets good grades,” I said. Don’t you get the best grades?

– What does it have to do! But he doesn’t know anything. He only studies to get his grades and then he forgets everything, because the truth is that he cares very little ”.

This dialogue by Carmen Martín Gaite in Slow pace (1963) serves to illustrate one of the major problems of the current educational system, which pushes students to memorize knowledge to regurgitate it on the day of the exam, and yet it is often too easily forgotten. An encyclopedic model enshrined in the so-called Wert law that Education now wants to replace with another based on competencies and application of knowledge such as the one recently implemented in Portugal, Finland, Quebec, Wales and Scotland, and which undoubtedly also invites us to reflect on the role that a quality public school should have in the heart of a truly democratic society.

“Contents and competences are not exclusive concepts, but complementary. Relevant content must be related to competencies and values, and the great debate that is missing is knowing how to prioritize these basic content in the different areas of knowledge, because if not, we have very saturated curricula that are never finished and that cannot be assimilated correctly ”, says Jaume Carbonell, pedagogue, journalist and co-author, together with professor and doctor of Philosophy Jaume Martínez, from Another education with cinema, literature and songs (Octahedron, 2020). The reflection and debate to which both invite, hand in hand with these artistic expressions, is not trivial: What should be the engine of a school that wants to guarantee equal access to quality education? How should this learning be? What other changes are needed? And what should be the role of teachers, students, families and educational administrations?

Is school too boring?

The problem is not only that it is (which, Carbonell recognizes, it often is), but that “many of the knowledge that is transmitted is not very relevant to understanding a fragmented, diffuse and complex reality. Reason and emotion are inherent in a motivating and lasting learning ”. The central idea, he affirms, is to teach them to think and develop critical thinking in the midst of an enormous amount of knowledge that continues to multiply exponentially: “What is the point of school if it does not help to think about the world? And for this we must teach to doubt, to ask questions, to contrast points of view and to know how to discriminate the wheat from the chaff and the truth from the lie ”. And if possible, do so by expanding teaching beyond the classroom walls, as Goytisolo said in this poem, fostering a permanent dialogue with the environment to observe and interpret it, thanks to its role as an open textbook in which nature, human environment, history, commerce, economy, art, party and all kinds of rituals are condensed.

“The media should be more present in schools, as a tool to analyze the reality of the world, look at the same event from different points of view and know what is said and what is hidden,” explains Carbonell, who in his book claims the importance of musical, cinematographic and literary references to enrich the gaze of teachers, establish connections between different knowledge and grow intellectually and humanly, as well as to approach any aspect of reality, be it injustice, scientific progress, discrimination , diversity or power. “It would be convenient, for example, for the Baccalaureate to analyze the fake news and how the discourse of lies is constructed. There are films that help critically analyze the media and social networks, such as Front page and The great carnival, by Billy Wilder; and in music there are also samples of response to an absurd education that prevents the development of thought, such as Another Brick In The Wall, by Pink Floyd, in which a children’s choir responds: “We don’t need any education, we don’t need any thought control; no more dark sarcasms in the classroom ”.

The importance of conversation

“What happens in school is a reflection of what happens in reality. And we find a quick example in reading: in Spain almost nothing is read, and that is perceived in school ”, reflects Juan Izuzkiza, professor of Philosophy in the Basque Country and author of Barking sheep (From Conatus, 2021). “Few young people want to receive what teachers can give, and that can cause the teacher, tired of trying to give something that no one wants to receive, to become a victim and settle down, so that dispassion reigns.”

How then to fight against this tendency to disconnect, in such a way as to achieve the opposite, motivation among students and a learning that persists far beyond that ritual that are exams? Carbonell remembers how, in The tongue of butterflies, José Luis Cuerda shows us, based on some stories by Manuel Rivas, how the way of teaching “can be a pleasant discovery, provocative knowledge, close knowledge, an exciting adventure, a game of relationships between disciplines and subjects that allows us to develop our capacity for understanding and the possibility of growing in autonomy and freedom ”. And in this endeavor, new technologies can become an extraordinary tool, as long as they are used critically and we are not regulated by them.

It is in this context that Carbonell and Martínez claim conversation as a central strategy, “understood in its most Socratic sense, asking questions, reasoning and arguing. Here, the questions are as important as the answers, because developing intelligence is not just looking for good answers, but asking the right questions and hypotheses ”. Just as relevant as practicing problem solving to raise social, scientific or philosophical questions, and which in turn makes the interrelation between the various knowledge, the students’ own experience and the context and content increasingly necessary.

On the way of teaching and learning, the teacher (whose knowledge must be culturally sound, pedagogically innovative and socially committed) has to accompany the student while seeking to balance authority and affection in his task: “The first thing is that the teacher creates his subject. If you believe it and have a passion for it, affection arises, because you are very interested in someone in whom you ignite the same passion that you have. And I’m not making this up myself: Machiavelli already said it, ”says Izuzkiza. Authority and affection, yes, but also humor: “As teachers, laughter and creativity tend to scare us a bit, because we like to have everything well tied up and protocolized. But authority is also won from laughter, “he adds.

The public school, by guaranteeing the right to education in conditions of equality and quality for all, plays a fundamental role in the exercise of democratic citizenship and social emancipation, and ideally aspires (although it does not achieve this in all cases in the same way) to attend to the student body in an inclusive way in all its diversity, “without accepting situations of privilege or exclusion”.

Whether for cultural reasons, gender, origin or sexual orientation, among many others, the reality is plural and diverse, and the public school –states Carbonell– has the moral obligation to transmit it, in the face of alternatives that defend a single thought: “The public school does not indoctrinate what you have to do or think about aspects such as abortion, euthanasia, feminism, sexual option or political opinions . It helps to know how to think, but it does not impose anything ”, he explains. Something that in turn relates to other obligations of the school: education in democratic values ​​and coexistence: “The most curious thing is that those who accuse the school of indoctrination are precisely the most doctrinaire.”

Considering a renovation of such caliber implies overcoming many obstacles, which Izuzkiza relates to the four legs on which education is sustained: students, teachers, families and educational administrations. Regarding the former, he affirms that there is little interest in knowledge per se, and he wonders if what Ortega y Gasset said in the 1930s is still valid: “Knowledge is ceasing to be interesting; people can now calmly say that they do not know and be proud of not knowing ”. A situation that, as already stated before, can cause disinterest, fatigue and boredom in the teachers themselves.

Faced with the trend of greater involvement of parents in their children’s learning, Izuzkiza warns about the danger of excessive interference and lack of trust, to the point of generating tensions that are difficult to deal with between parents, students and teachers. “There are psychologists who identify four types of parents: the permissive (who never say no to their son or daughter), the denialists (for whom the responsibility is always someone else’s), the overprotective and the co-responsible, who make them responsible for their actions to their children and also to themselves, insofar as they are their parents. Most of us parents feel co-responsible; Nobody identifies with the first three, but the reality is that there are many of those ”. Without forgetting, he concludes, a continuous legal balance between policies and policies of successive educational administrations that often means that “we do not know what to expect”.