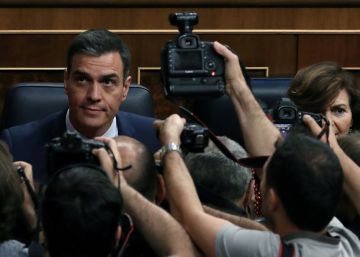 Summed it up Pablo Casado with casticism and that strange aplomb that politicians acquire when they pronounce a common place of the proverb: for this trip it was not necessary so many saddlebags. With this he expressed without wanting something deeper that has to do with one of the great paradoxes of parliamentarism. At the same time that the honorable members lost almost all the rhetorical virtues that used to be admired in their guild, the camera has become an extension of the television sets and they have been infected with the greatest flaws: the lack of meaning of the tragedy.

In the debates on TV, the characters shout without ever reaching a climax or an anagnórisis, which is the recognition of the hero and the antagonist, necessary for a tragedy to exist. As they come convinced of the house and return to it without having doubted anything, instead of a play we attend a dog fight. No matter what they bark because the argument is the fact of barking. The signifier, not the signifier. The policy has long been told not as a story with plot and characters, but as a football game where the only possible agreement is to insult the referee.

This can work on TV, which is grown by sweeping hooligans, but in parliament it is a disaster that leads to the shame we have been through this week. As nobody reads Shakespeare, no one understands seductions and betrayals anymore, and everyone has been persuaded that the mere force of their screams will take them, sooner or later, to power. As a show, he may have his one (the embarrassment of others is always irresistible), but, from a democratic point of view, someone would have to remind the honorable members that the seat is not a Tertullian armchair.