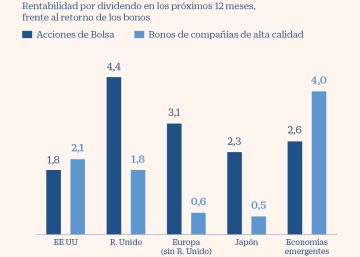 The profits generated by companies may have different destinations. They can be reinvested. They can be applied to reserves, to reinforce solvency. They can be used in share buyback programs, a formula widely used in the United States. Or they can be distributed to shareholders in the form of dividends. The coronavirus pandemic has caused many companies to restrict this last option, either out of real necessity, financial prudence or on the recommendation of the supervisor. But now, with the economic recovery expected in 2021 and the promise of a vaccine, many companies are reviving dividend programs, which can represent a good investment opportunity, provided it is chosen well.

“Companies that have a constant and solid shareholder remuneration policy have shown that they end up having good stock market performance,” explains Antonio Rodríguez Rico, manager of the Baelo Patrimonio fund, an investment vehicle that companies that have been without for many years reduce dividend payments.

The truth is that the coronavirus has put many companies on the ropes. With revenue and profit slumps and great business uncertainty, managers have had to review shareholder pay. According to a report prepared by the manager Janus Henderson, the global distribution of dividends in 2020 will fall by around 18% compared to the previous year, to levels of 2016. The sectors most affected by these falls have been the airlines , hotels, reservations (where most companies have entered into losses), as well as the financial sector, in which the European Central Bank and other regulators have asked entities to postpone dividends to prioritize their solvency. Also automakers, fashion companies and entertainment companies have cut payments significantly.

After the difficult second and third quarters of 2020, dividend declines have moderated during the last straight of the year. According to Janus Henderson’s calculations, business coupon payments will return to normal at the end of the first quarter of 2021. That is, just one year after the pandemic broke out.

In the banking sector, the ECB has already hinted this week that it will allow the most solvent entities to resume payment to shareholders. In the insurer, companies such as Mapfre or Catalana Occidente have shown their interest in returning to pay the coupon before the end of the year.

The normalization of dividend payments is joined by an additional factor: the very low interest rates on public and corporate debt, which are expected to continue for years. “As the yield of bonds falls, the search for income will intensify and investors may consider the possibility of going from debt to equities,” they explain from the British firm Schroders. This transition carries additional risks, since the stock market is much more volatile than fixed income, but the dividend yield “is becoming more attractive,” they point out.

Dividend investment is based on acquiring a portfolio of high-quality shares, with a generous and sustainable shareholder remuneration policy, to maintain them for years and collect coupons as a source of extra income. “When building a dividend investment portfolio, investors should be careful not to buy companies that are cheap for justified reasons. It is important to analyze a company’s expected dividend payments as well as its financial strength,” they point out from Schroders.

And what dividend yield can be achieved? In Europe, the expected return for the next 12 months will be 3.1% (only for the collection of dividends and regardless of whether the equity portfolio appreciates or devalues). Investing in high-quality company bonds, the expected return, according to Schroders’ calculations, is 0.6%. The dividend return on UK stocks is even higher, at 4.4%. In contrast, on the US Stock Exchange (where companies tend to prefer to buy back shares rather than pay dividends), the expected return is only 1.8%.

“Although the dividend is less widespread in the United States, there are also a handful of companies that have been maintaining or increasing payment to shareholders for decades,” recalls Antonio Rodríguez Rico.

The S&P agency launched the S&P 500 Dividend Aristocrats index in 2005, which includes only those companies that have been increasing their dividend for more than 25 years. There are currently 65 companies, 30 of which have more

50 years with these standards. Over the last 10 years, the average return on the aforementioned index has been 11%, slightly higher than the general index (the S&P 500), but with less volatility. Between these aristocrats there are companies like the telecom AT&T, the oil company ExxonMobil or the machinery manufacturer Caterpillar.

There is also a European version of this index, which includes firms such as the insurance company Allianz, the Spanish Red Eléctrica and Enagás, the oil company Total or the French Sodexo. In the last five years, this index has risen by almost 3% on an annual average.

The need to seek recurring sources of income to replace the dwindling coupons of fixed income has led to more and more funds pursuing a dividend investment strategy. Low-cost exchange-traded funds (ETFs) that track the evolution of indices such as the aforementioned S&P 500 Dividend Aristocrats have also become popular. In addition, some of these funds have pay-as-you-go policies and, two or three times a year, pay a coupon to participants.

One of the most popular dividend funds is Fidelity Income (+ 8.84% average return in the last three years). Regarding exchange-traded funds, the Vanguard FTSE All-World High Dividend Yield stands out.