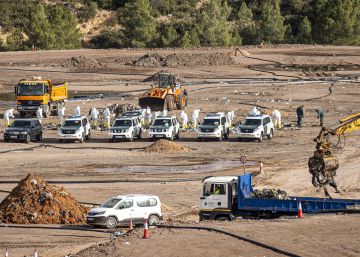 Investigators of the disappearance of the young Valencian Marta Calvo they plan to make a second registration of the house rented by Jorge Ignacio Palma in the town of Manuel, place where the trail of the young Valencian girl was lost on November 7. The objective is to compare the version that the incarcerated one offered to the agents after surrendering to the Civil Guard of Carcaixent at dawn on December 4, sources of the investigation assure. Specifically, parts of the house will be examined with the help of specialized dogs.

The first inspection, despite the thoroughness, did not serve to find any trace that gave solidity to the later version that Jorge Ignacio confessed that the young woman accidentally died at home after a night of sex and cocaine. As he said, for fear of the consequences, he dismembered it and distributed his remains in garbage bags that he threw into garbage containers from different Valencian towns. A second record would serve to contrast some details of his confession, which the researchers distrust from the beginning. No trace of the girl was found in the house, which is very strange if she really dismembered her body there, just as he said.

The tracking device continues Monday with the search of the body of the young at the Dos Aguas landfill, where urban waste arrives from the municipalities where Jorge Ignacio says he got rid of Marta's remains.

The Civil Guard also uses the geolocation of Jorge Ignacio's mobile phones to continue the search elsewhere. The Special Group of Underwater Activities of the Civil Guard has once again joined the search for the body of the young woman in the vicinity of the Valencian town of Manuel and at the Dos Aguas dump. The group is made up of six specialists in carrying out traces in rivers, reservoirs or wells.

The Civil Guard and the National Police, which keep open independent investigations, have indications that relate the man – in provisional prison – with the death of three women. Two others who survived accuse him of having subjected them to the same dangerous practice. Palma would have hired in all cases its services as prostitutes, would have supplied them with high purity cocaine and, in addition to using it nasally, it would have been introduced, at least in some cases, by the vagina and rectum, presenting this last route an especially high risk of poisoning.

Based on these facts, the security forces are investigating “if this modus operandi It is similar to cases that occurred in other constituencies ”outside of Valencia and in other“ autonomous communities, ”as confirmed last week by the delegate of the Government of the Valencian Community, Juan Carlos Fulgencio.

The case of Marta Calvo is not the only one investigated by the agents of the armed institute. These inquire into the disappearance of another young woman in the neighboring town of Ontinyent who, according to the first investigations, would have no connection to the case of Estivella's young woman. The same group of agents of the Commander of the Civil Guard of Valencia and the UCO that investigates what happened to Marta Calvo is responsible for the disappearance of Wafa Sabbah, 19.