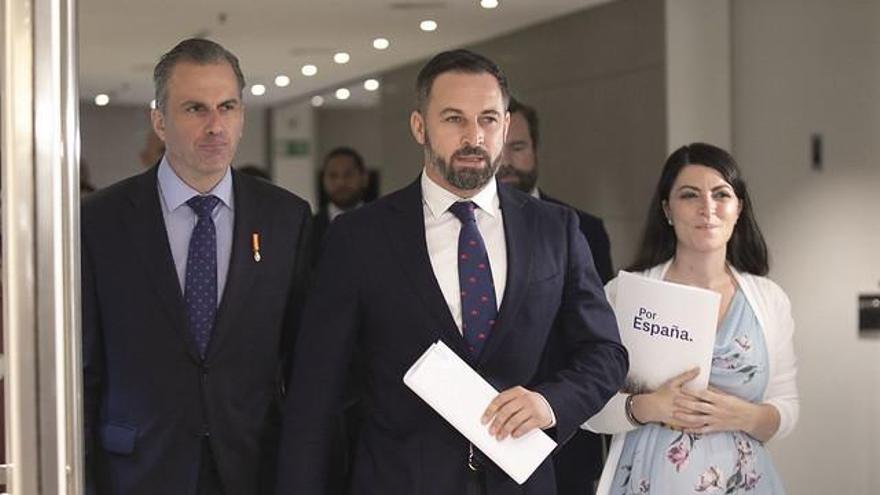 Santiago Abascal has not just seen the internal life of the formation that the former leader of the PP leads with an iron hand calmed down. Vox’s critical sector continues to grow in the face of “the lack of internal democracy” which they claim is demonstrated by the national leadership, which is motivating, according to what they denounce, the loss “by jets” of affiliates for months. Especially in Catalonia, where the far-right formation has just appointed deputy Ignacio Garriga as a candidate for the Generalitat, whose cousin, Juan Garriga, returns to present himself as coordinator of Vox Barcelona with the surprise that he already has at least two rivals who want to dispute him The charge.

Barcelona is one of the 19 provinces in which the far-right party will hold primaries to renew its Executive Committees (CEP) since the statutes, after its latest and recent reform, establish that they will only be convened in those provinces that have more than 500 affiliates. Before, you only needed to have 50. Last week the Vox National Executive Committee approved to open this internal process in Madrid, Barcelona, ​​Valencia, Murcia, Alicante, Malaga, Seville, Asturias, Toledo, Zaragoza, Cádiz, Balearic Islands, Granada, Almería, Palma, Córdoba, Valladolid, Cantabria and Jaén.

In the rest there will not be and will continue to be directed by the managers appointed ‘by finger’ from Madrid. The process will conclude on September 24 after the general scrutiny of the vote – which will be telematic – and the announcement of the final results will be on October 4.

Critics believe that the national leadership has chosen precisely these dates because they will possibly coincide with the debate on the motion of censure that the leader of the far-right formation announced against the Prime Minister, Pedro Sánchez, and all the media attention will be focused on that issue and not on the internal conflicts that may be generated in these primaries.

But in Barcelona the critical sectors – which are not unified – are already on the warpath and have presented at least two alternative candidates to the ruling party represented by Juan Garriga, who once again opts to lead the Provincial Executive Committee with a continuation team in the that is the treasurer of Vox Barcelona, ​​Monica Lora, and Juan Cremades, among others.

Garriga is processed and awaiting trial along with other Vox charges for an alleged crime of incitement to hatred for having distributed propaganda against Muslim immigrants in various towns during the municipal elections of 2011, when they were still in the Plataforma per Catalunya (PxC), a now defunct xenophobic Catalan party led by Josep Anglada. The Prosecutor’s Office has asked to acquit them but the private prosecution, which is exercised by the lawyer Hilal Tarkou on behalf of the Watani association, asks for each of them four years in prison.

One of these alternative candidacies is led by Jesús Rodríguez Pachón, coordinator of Vox in Tarrasa who is presented under the banner of ‘Vox Plus Ultra’. He is a lawyer and as he explains in his presentation poster, what he feels most proud of “is having been a Civil Guard for 15 years.” In addition, he highlights the work he has done during his mandate promoting since 2018 “the most numerous group of affiliates and supporters in all of Catalonia –with N for Spain–”, or to return to “pay homage to our national and Constitutional Flag in the streets. on the anniversary of December 6. And also the fact that “after 40 years the flag of Spain has been seen again in the middle of the boulevard on Saint George’s Day.”

His supporters praise his presence, ensuring that “personalities are abundant” and denounce the loss of affiliates that the far-right formation is suffering in the Catalan capital: “50% since the appointment of the manager”. They also believe that it is a very poor balance that Vox only has a single headquarters in all the province of Barcelona where in the last generals they obtained 184,000 votes of which “only 143,700 were in Barcelona capital.” The candidate himself and this group of unruly members warn of the “dirty game” that the government sector could carry out to guarantee the election of Juan Garriga. “It is not admissible that the coordinators have not had access to the data of our own affiliates. This puts us at a disadvantage” they regret

One of Rodríguez Pachón’s proposals is the commitment that “all the organic charges of Vox Barcelona make their declarations of assets and income available to the party before charging a single cent of it” and that the charges are “much more accessible to affiliates “.

The other alternative candidacy is led by Sayde Chaling-Chong García, who has the support of the current called VoxHabla. This “militant of the black race”, as he has presented himself numerous times on Twitter, of Cuban origin and Chinese descent, denounced in November 2019 that he felt “scammed, cheated and even discriminated against” after the appointment of Monica Lora and other Vox leaders – former “platforms”, as critics call them – charged with that Murcia Granada 2011 campaign against immigrants. Now Sayde believes that the time has come to take a step forward to return the far-right formation to its true origins, much more democratic in his understanding than they are now.

Pressures and “threats” in Granada from Macarena Olona to critical members

VoxHabla is a critical current led by Carmelo González, the Canarian militant was dismissed from his position as head of communication in Las Palmas after announcing that he would attend the primaries to contest the position of president of Vox from Santiago Abascal himself, although he could not collect enough guarantees. González denounced that the party had not respected the rules and that there had been opacity in the internal elections process.

The current, which was established as an association at the end of March, is fighting in other provinces such as Murcia, Almería, Seville, Granada, Cádiz, Valladolid and Toledo, supporting alternative candidates. According to Fernando Moya, vice president and communication manager at VoxHabla, elDiario.es has been receiving numerous complaints and reports of irregularities from these candidates in these primaries for days. Among other things, they explain that the deadlines for campaigning are not being respected; or that the national leadership, whose leaders must be neutral, is giving “shameless support” to the official candidates. They also complain about the difficulties they are encountering in collecting endorsements, estimated at 10% of the Vox census in each province.

But according to Moya, “the most serious thing of all is the pressure and threats that many affiliates are suffering. There are coordinators who are making calls to vote for official candidates, even threatening them with the loss of affiliation if they don’t,” he explains. Among the complaints, Moya highlights the behavior of Macarena Olona, ​​deputy for Granada and general secretary of the Vox group in Congress. “It is the most bloody thing for a national deputy to personally call militants by phone to vote for the official candidacy, warning them that otherwise they are politically dead.” This group plans to denounce all these anomalies before the electoral committee “when misdeeds are consumed,” warns Moya.

In Murcia, for example, there are several militants who withdrew from the party and later requested their reinstatement but have found that the party has paralyzed their records in Madrid, which means that they cannot vote in these long-awaited primaries. One of them is Carlos Márquez Sánchez, who left the militancy in December of last year and requested his discharge again later. Now he denounces elDiario,. It is that David Lucas, national territorial responsible for the eastern part of the party, has decided to block his readmission before the official opinion of Guarantees, “as evidenced by two screenshots of the chat in which they told me, that David Lucas I had already decided that they would not readmit me. ” And it is not the only case that is known because, according to critics, “there are many affiliates who are in the same situation.”