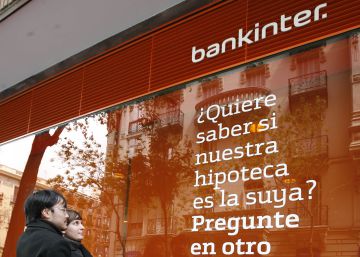 Something over four million people are they mortgaged to buy a home in Spain Between 2006 and 2009, the last blows of the boom real estate, according to the INE. Nine out of ten signed a variable loan, so they were victims of a euribor through the clouds – closed 2007 at 4,793% -. But they were also awarded the differentials – fixed percentage agreed with the bank that joins the Euribor – lower sold in Spain. No one thought that one day the sum of those values ​​would be negative. It has happened and the bank, which this week knew that the EU lawyer opens the door to cancel the non-transparent mortgages linked to IRPH, is again in the spotlight.

The one-year Euribor closed in negative for the first time in February 2016 (-0.008%). It was just the beginning: in August of this year sank to -0.356. Those mortgaged with minimum differentials are today the big beneficiaries of having already negative interests. "We see them in those mortgages with a differential of less than 0.356% that are reviewed in September with the August Euribor. They are loans signed between 2006 and 2009," explains Miquel Riera, mortgage expert at HelpMyCash.com comparator.

This is the case of customers who contracted with Bankinter a differential of 0.18% in 2007 or 0.17% with Deutsche Bank. In 2008 Santander offered 0.25%, the same as Caja Duero once did. Sabadell stayed at 0.28%. ING Direct reduced its Orange Mortgage to the Euribor plus 0.33%. And the old Caja Madrid at 0.37%, although some clients negotiated a reduction. If the index continues to fall, loans from the former Caixagalicia (0.38% differential), Barclays (0.39%) and Activobank (0.49%) could soon be added to this list.

Thousands of mortgaged They wonder now if the bank is going to compensate them. The response of the bank is flat: it makes no sense to pay for money they have lent. "The rationale of the loan is based on the fact that a counterpart is agreed that is a compensatory interest rate. We understand that the final rate cannot be negative," says the spokesman for the Spanish Banking Association, José Luis Martínez Campuzano. What they are doing is canceling the differential so that the interest applied in each monthly installment is zero, that is, that customers pay only the outstanding capital.

"Our mortgages at Euribor plus 0.18% are a very small portfolio that was marketed 12 years ago. Right now they would be at 0%, that is, customers are only amortizing capital," says a spokesman for Bankinter. From the entity they make it clear that mortgages are legally classified as unilateral. "It seems contrary to the very nature that an entity is forced to pay a client for lending money. A loan, in exceptional cases, could become free, but never burdensome."

And the same for ING clients who contracted a 0.33% differential. "They should not pay any interest and will only have to pay back the principal principal of the loan while this situation is maintained." Bankia – whose mortgages come from up to ten different entities – follows the same policy. "The differential is canceled and we do not charge interest and thus our customers are being informed in their monthly receipts." The entity considers that "the nature of a loan cannot be perverted and that it generates negative interest." In all cases, the mortgaged person does not have to contact the bank, since the elimination of interest is done automatically at each annual or semiannual review.

But there are those who disagree with the solution chosen by the entities. "If the interest is negative, they should deduct it from the part of the capital that is paid for the fee," says Miquel Riera. "We ask that the contract is fulfilled and the variability of the Euribor is applied. The consumer has paid interest for years because the index went up and now we have to respect that it goes down," says Enrique García, spokesperson for OCU. Reclamador.es is requesting "that banks do not impose this zero clause on these mortgages, which means applying 0% instead of offsetting interest," says Almudena Velázquez, lawyer for the online banking services company. In reality, the bank could only apply that 0% cap if it appears in the mortgage deed. But those from a decade ago did not usually have those clauses, which is the case with the new ones – those signed as of June 16, 2019 can no longer have negative interests.

The way of the courts

At the moment, few mortgaged people have consulted with a consumer association or law firm to initiate a legal claim. The general opinion is that it does not go to account because today it is about small sums of money. For example, in a mortgage of 150,000 euros at 25 years with Euribor plus 0.30%: "Every month, more than four euros in interest would be deducted, which would be subtracted from the share of the capital. A year, they would be just over 50 euros ", calculated in HelpMyCash.

"Going to the courts for these amounts does not compensate and, in addition, nobody lends you money to lose. Many judges would adopt this argument when it comes to resolving a claim," says Antonio López, spokesman for Cecu Madrid, where a question has come . In Adicae they do not prepare any offense at the moment. "There are people who have not yet heard because they still do not have to review their mortgage." Nor do they argue in Arriaga Associates.

"The company is waiting for the response of the bank. If the negative trend of the Euribor continues, it is very likely that consumers begin to file both extrajudicial and judicial claims," ​​they say in the banking law department of Gaona Abogados BmyV. However, they continue, "we understand that a claim is unlikely to prosper, either by refund of amounts or amortization of capital."

Perhaps it is more useful to take advantage of the situation to negotiate better conditions in the mortgage.

What stresses the Spanish freelancers?