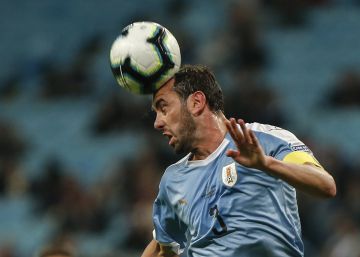 Inter Milan announced on Monday the signing of the Uruguayan central Diego Godín, 33 years old. "Officer: There is a new sheriffin the city Diego Godín is already of the Inter! ", the Italian club wrote this morning in his official Twitter account, the player comes from Atlético de Madrid, team of which he was captain but where he did not reach an agreement with the director this season to renew his contract for another year, the center will reinforce the defense of the team of Antonio Conte, which already has the Slovak Milan Skriniar, the Dutch Stefan De Vrij and the Brazilian Joao Miranda, with which Godín coincided at the Athletic Madrid.

The goodbye of Godín to Atlético was known. He gave a press conference where he communicated his decision before the last League match, held at the Metropolitan Wanda against Sevilla last May. During the meeting, the fans dedicated an emotional tribute to one of the great icons of the Simoene era. The samples of gratitude to the Uruguayan already began from the arrival of the team bus to the stadium. The hundreds of fans who crowded on the railings guarding the passage of the vehicle into the bowels of the stadium dedicated the sharp "u-ru-gua-yo, u-ru-guayo". "A goal in memory, a Pharaoh for history," read a banner displayed in the south, in reference to the goal that marked the head before Barcelona at the Camp Nou in 2014 and that meant the title of League for Atlético .

In addition to that League, Godín won two Europa Leagues, one Copa del Rey, three European Super Cups and he scored 27 goals in 387 games. In addition, lost two Champions League finals with the rojiblanco club, both against the eternal rival, Real Madrid.

The hiring of Godín by Inter is part of a sports project promoted by the interim CEO, Giuseppe Marotta, who publicly acknowledged that he wants to provide coach Antonio Conte with great international experience and a winning mentality.