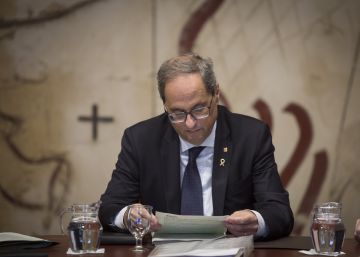 Writers such as Juan Marsé, Luis Goytisolo, Javier Marías, Javier Cercas, Juan José Millás and Rosa Montero have demanded the resignation of the president of the Generalitat, Quim Torra, and the call for regional elections that "give rise to a government that truly represents all Catalans", and does not exclude, reverse the cuts and "do not steal public money to finance the you process". In a statement from Zero Scraps who have signed more than twenty personalities, in addition to 300 other signatories, the resignation of Torra as president of the Generalitat is required. "We cannot allow institutions to continue to be used to encourage confrontation and spread hatred among fellow citizens. These types of situations are typical of the most reactionary rights, called Torra or Abascal," said the platform's statement.

The text demands "a new government, emerged from an election, which really represent all Catalans, and address the reversal as an urgent task of the cuts and rebuild among all the open and plural Catalonia ". In a telephone call with EL PAÍS, Javier Cercas has confirmed the signing of this manifesto that, as he explained, has not been the first under the umbrella of Zero Scraps and is financed with financial contributions from the signatories. "The text It is aimed at showing that the Spanish left and the Catalan left do not want to face that this movement is unequivocally reactionary, "says Cercas. The manifesto has also been backed by actress Julieta Serrano, filmmaker Fernando Colomo, academic Francisco Rico or the former Carlos Jiménez Villarejo, among others, who present themselves as "left-wing people with different political cultures".

The text of Zero Cuts places special emphasis on denouncing the "lies" of Torra and Carles Puigdemont on the trial of you process. The platform states that the Catalan leaders judged by the Supreme Court have not been "condemned for their ideas." The trial has not "sanctioned millions of voters," and "independence has not even been tried." And he insists that the Supreme Court has judged "the acts of specific leaders who have violated the Constitution, have tried to fracture the country and divide the people." "The defendants have been convicted of misappropriation of funds. That is corruption. They are a 'criminal organization' that looted public coffers under the 3% flag. They are not 'fighters victims of a repressive state,' says the text of Zero Cuts .

In this sense, they indicate that the independence leaders "are not victims that have to be in solidarity ", which are part of a "elite who has the power of the Generalitat" and who called a referendum "without the minimum democratic guarantees". On the other hand, they deepen that the "qualification of 'political prisoners', In addition to disrespecting many anti-Franco fighters, it is to support to those who divide and face the people. "And who try" to use the sentence for greater division and confrontation. "

filmmaker Chantal Akerman’s monologue about her mother and the loss

Rosalía and Billie Eilish launch ‘You are going to forget’, their long-awaited collaboration