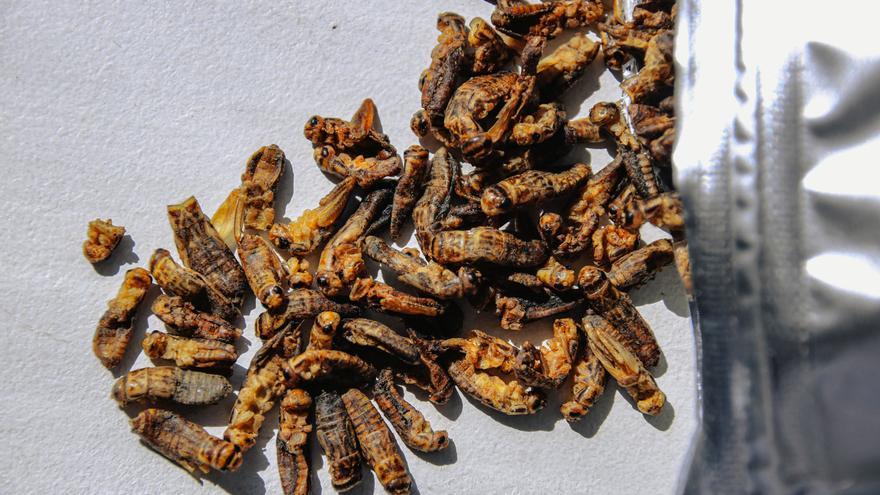 Lisbon, Aug 1 (EFE) .- Two types of crickets, larvae, lobsters and a beetle will hit the shelves of Portuguese supermarkets this summer, a new source of cheap and sustainable protein that European countries embrace as food from the future.

The Portuguese Directorate General for Food and Veterinary Medicine (DGAV) paved the way for the commercialization and consumption of insects for humans in June – until now limited to animal feed in Portugal – within the transitional period of the European regulation on novel foods.

These are seven species that “were already marketed in at least one member state,” confirmed to Efe Paula Bico, director of Food Nutrition Services at DGAV.

They are species that it is already possible to “produce and use” in Portugal, which follows the trail of countries such as Belgium, the Netherlands and the Czech Republic in which this food is increasingly common, he added.

“The two most common” are the flour larvae (Tenebrio mollitor) and the domestic cricket (Acheta domesticus), Bico said.

Chocolate bars, flavored flours and snacks that “camouflage” crickets and larvae will be the first experience of Portuguese consumers, a bet for the consumer to “accept” insects as best as possible.

The challenge now is to “break down prejudices”, tells Efe Guilhem Pereira, head of Portugal Bugs, an insect production company that was born in the classrooms of the University of Porto.

In a future more accustomed to this new protein, “flavored insects will be common,” predicts Pereira, who believes that crickets flavored with ham or cheese can become the new fried potatoes that accompany a beer.

CRICKETS AND LARVAE, THE STARS OF THE MENU

Of the seven approved species, Guilhem produces the two most common on his farm: the mealworm (Tenebrio mollitor) and the domestic cricket (Acheta domesticus).

The first spends eight weeks of growth in the larval stage and is used to make four types of flour, chocolate bars and other snacks.

In addition “the production is greater than that of crickets, because it needs less space”.

The domestic cricket has a higher amount of protein than the tenebrio “around 60% to 70% protein,” says Oscar Silva, founder of the GotanBug entomoculture company.

“Cricket flour has a milder smell that can be reminiscent of dried fruits”, Silva compares, and says that tenebrio flour has a “higher proportion of fat” that can be less pleasant to those who are not used to it.

As it does not undergo metamorphosis, its rearing is simpler: the micro-cricket hatches from the egg and increases in size until it reaches an adult stage.

“To produce a kilo of beef we spend ten kilos of feed,” says Pereira, and explains that with the same amount of feed, the production of tenebrio is multiplied by nine.

As for greenhouse gases “compared to cows, tenebrios represent a reduction of 1,000%,” he says.

The use of water resources is “close to zero expenditure,” Silva clarifies, because “most insects do not need access to a source of water, they obtain it from the vegetables they consume,” agrees Pereira.

A food that comes from agricultural waste, a clear idea for Silva, who established his company in an agricultural area “precisely because of that”: they use the leftovers from the area, which currently supply all their needs.

“We introduce something into the value chain that did not have it before,” he emphasizes about the circular economy around the production of insects.

Vegetables that leave the commercialization chain because they do not conform to the market canon, leftover cereals or brewer’s yeast from food factories, “insects can give a better destination to food than garbage.”