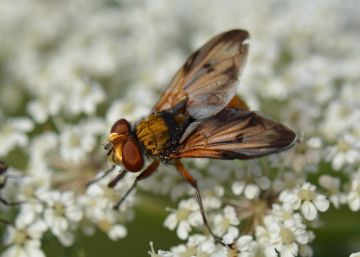 The advancement of spring observed in the plants Y the birds It is also occurring with insects. A study with 2,000 species of pollinators shows that most have advanced their activity period by almost a week in response to climate change. The phenomenon is being more pronounced in the southern populations of the continent. However, the beginning and duration of the flight of the different species of bees, butterflies or beetles is so heterogeneous now that researchers fear the consequences that so much change can have on pollination.

The study, published in Nature Ecology & Evolution, is based on almost 20 million observations of the emergence and duration of the flight of 2,027 insect species in Europe. Among them are hymenoptera (bees and wasps), diptera (flies and mosquitoes), beetles (beetles and ladybugs) and lepidoptera (butterflies and moths). Registries date back to 1960 and come from most European countries.

The data show that insects have advanced the start of the flight, its period of greatest activity, at a rate of 0.1 days per year since the 1960s. In total, in 2016 (last years of the study) pollinating insects emerge 5.8 days earlier than in 1960. At the same time, the duration of that central period in the life of these arthropods would have been shortened by 1.8 days in these 56 years. Both processes, vital for pollination and the proper functioning of ecosystems, have accelerated since 1980, when rising temperatures in the northern hemisphere He began to be more accused.

Most insects have advanced their flight in 5.8 days since 1960

The advancement of spring and summer of pollinating insects, however, is not being uniform. In 43% of the species what has been produced is a flight delay or they continue to leave as they used to. There are also different responses according to the orders: the dipterans and the beetles have advanced their central period of activity more than the lepidoptera or hymenoptera.

“Why is so much heterogeneity? We still don’t know, but we see that a part of it is explained by evolutionary history: related pollinators (those of the same taxonomic group) show similar changes in flight while less related pollinators they have different answers “, explains in an email the entomologist of the National Museum of Natural History of France and main author of the study, François Duchenne. “The variation also appears related to the location, the southern species are advancing their flight more than the northern ones,” he adds.

The climatic code could explain why, within the same species, the populations farther south go to look for flowers before their relatives in the north. One last fact: the earliest species, those that fly with the first spring outbreaks, are ahead of those that emerge in the middle of summer or already in autumn. “We do not know if the answers we have observed are adaptive or not, that is, if advancing the flight favors survival. It is a key issue that we are trying to investigate,” says Duchenne.

Beyond survival itself is the impact on the whole ecosystem. One of the most prominent changes this study has revealed is that insect communities have broken. Modeled by the co-emergence of the different species, of the flowers and even the presence of predators, the moment of the flight of some populations and others overlapped or occurred that of some after that of the others. According to this work, many insects now emerge at the beginning of the season, clustering on the flowers, while there is an abrupt decline in the rest of the season.

“The seasonal structure of pollinator sets has changed in the last 60 years: they are less synchronized than then,” says the French researcher. “This reduces the functional characteristics of pollinator communities (redundancy and complementarity), which could have negative effects on pollination,” he concludes.

It could be the case of bees, main pollinating agents. “In Doñana for example, the typical flight date began on February 15, but in 2016, a particularly hot and dry year, the bees were already flying on January 8,” recalls the researcher at the Biological Station of Doñana (EBD -CSIC) Ignasi Bartomeus. Already in 2011, Bartomeus showed how these insects were advancing their life cycle Due to climate change.

For Bartomeus, all these changes in phenology are an alarm signal. “While the synchrony between interacting species, such as bees and plants, is maintained in most cases, its consequences go beyond just when things happen,” he says. And he gives two examples: The first, starting the flight or flowering before, increases the risk of suffering a frost that decimates the population later. The second, to develop at a higher temperature, implies that the metabolism of insects goes faster, consuming reserves faster. “So far the species have been adapting because life is very flexible, but we don’t know to what extent these survival mechanisms can work before the situation is broken.”