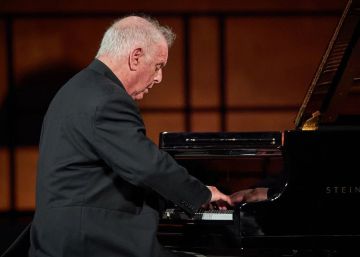 Confined to Malaga, in a country house, and acquitted of the incessant travels of an international music star, Daniel barenboim He would get up every morning and study the piano sonatas of Beethoven. In the interview with Jesús Ruiz MantillaBarenboim has the modesty to admit that he has enjoyed so much in a time of calamity and pain: he did not have to exhaust himself through airports and luxury hotels; He did not have to conduct and then attend exhausted and smiling at those receptions that billionaires and patrons of the great musical institutions give to eminences like him. He had breakfast, went out to the garden, sat at the piano, opened a score. That at 77 years of age he still has to study hard, and with visible enthusiasm, those Beethoven sonatas is an indication of the bottomless richness that can be contained within a music and also of the mixture of perseverance and fervor that is the food of all learning. Learning never ends. In our time, talent is associated with effectism, and aesthetic enjoyment with immediacy, and nothing that requires long constancy seems attractive.

Daniel Barenboim recorded over three years, one after another, the 32 Beethoven piano sonatas, which were published in 1984. Now he tells Ruiz Mantilla that he has recorded them or is recording them again. So many years of familiarity with that music will have given him an intimate, detailed, granular knowledge of each of the works, a complete vision of that creative current that runs through most of Beethoven’s adult life and stops, somewhat mysteriously. , five years before his death. Beethoven began publishing piano sonatas when he was above all a young player who amazed with the quality of his virtuosity and his abilities as an improviser. The misfortune of deafness, says Richard Taruskin, by cutting him off from social life and spoiling his career as a pianist, made him withdraw into the most solitary and speculative facet of music: and perhaps in accordance with that seclusion, the piano sonatas that he was publishing ceased to be attractive scores and of not much difficulty for amateur performers and domestic salons, and became works of extreme technical demand and an expressive intensity that was closer to confession and outburst than to cultivated social entertainment. . The great deaf and misanthrope recluse was alert to technological developments from which his creative talents could benefit. The piano, as we now know it, with all its prodigious capabilities, was being perfected just in Beethoven’s time, and he had before anyone else a model designed in London by an admiring maker of his who sent it to Vienna. There is undoubtedly a correspondence between the unleashed freedom of the latest sonatas, their formal radicalism and their recapitulation of the music of their predecessors, and the flexibility, spaciousness, precision, and nuance of such a sophisticated instrument.

Barenboim says that a musician is not a performer, but a reader: a reader endowed with absolute pitch, absolute attention, who has to read each note one by one and absorb and express all its richness, aware of what the score says. and also of what it does not say, of sounds as well as silences, as a reader of literature perceives each sentence by reading what is written in it and what is implied, what is hinted at, what is suggested, what is not said, what it will be discovered not in the first, but in the second reading, or when the book is read again after the years, in the light of the reader’s experience, that of his readings and also that of his life. The Beethoven who finishes the last sonata, number 32, at the age of 52 in his life does not resemble the young man who published the first almost 30 years ago, when he was a young virtuoso full of future. The young man composes the first sonatas as a celebration of a perfect, balanced, luminous form, inherited from Haydn and Mozart, already modified by him with a personal bias that is still taking hold. In the final sonatas, in the last of all, the form disintegrates into abrupt mutations that reveal the very process of trying and finding the composition. The motifs follow one another like drafts that never melt into a definitive invention: one of them takes on a strange dance fury and sounds like a boogie-woogie. The sonata, rather than ending, dissolves like a murmur, the blurred lines of a drawing, on blank paper, silence.

Barenboim should be listened to playing that sonata, reaching that end, on the piano in his house, in the strange silence of confinement. Nor is he the same musician who recorded it in 1984, the same person. Confinement and stillness will have allowed him a concentration that only these exceptional circumstances have made possible. We have seen Barenboim direct the five hours of Tristan and Isolde from memory. I would like to know what it is like to carry all that music in your consciousness, what it will be like to progress in the journey of the piano sonatas looking only at the score, or imagining them, one by one, that constellation of forms and emotions and states of mind , the intimate diary of a whole life. It will resemble the way in which people used to carry entire poems in their memory, although perhaps also the presence that that same music was acquiring in Beethoven’s imagination as he composed it, in recent years, when he had already lost it completely. the ear.

In a vicarious way, even the amateur, even if they have no musical training, can dwell in the sonatas, stay in them for a long time, without the rush and anxiety of listening to other things, with a sedentary lifestyle that is not entirely elective, because it would have existed without the confinement. In the inhospitable days of mid-March I found a coat in that case of Beethoven’s sonatas recorded by Barenboim in 1984, and I am still in it. The more I listen to them, the more resonances they awaken in me, and the more new things I discover in them. I can’t imagine what it will be like to touch them yourself, really live in them.