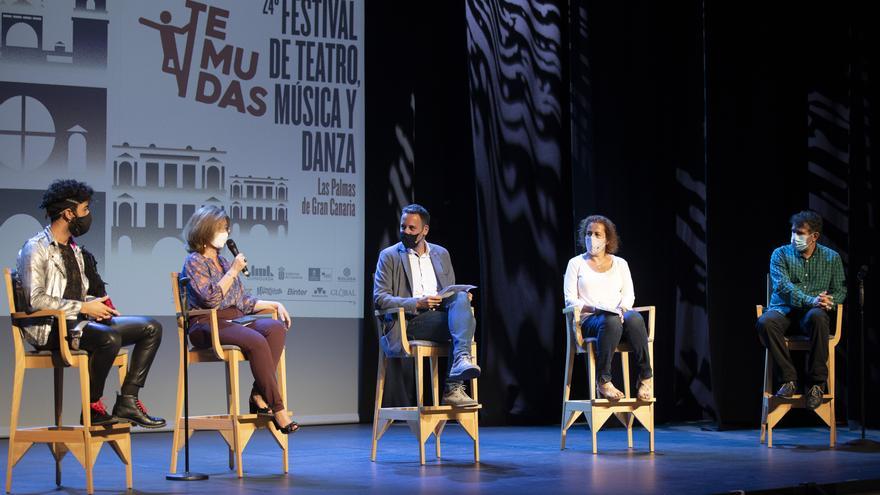 He Guiniguada Theater welcomes this Wednesday the start of the twenty-fourth edition of the Festival of Theater, Music and Dance of Las Palmas de Gran Canaria with the premiere, at 7:00 p.m., of ‘Lope Report’, an original proposal from the Tenerife company Morpheme.

A second premiere, contemporary comedy ‘The damn door of a haunted house’, of the Gran Canaria theater company AnartistsHe will also go up to the tables of the Vegueta Coliseum on the 9th and 10th at 7:00 p.m. Tickets for both productions, whose registration period opened last Friday, are sold out.

The Councilor for Culture of the City Council of Las Palmas de Gran Canaria, Encarna Galván; The director of the Temudas Festival, Marisol García, together with the general director of Culture of the Government of the Canary Islands, Rubén Pérez, and representatives of the companies Morfema and Anartistas presented details of the shows that will start this new Tuesday at a press conference edition of the Festival, whose programming has been postponed due to the health situation caused by the Covid-19 pandemic.

Directed by Ignacio Almenar and with the participation of Ricardo del Castillo, author of the dramaturgy, ‘Informe Lope’ addresses the work of Lope de Vega in an original way and with a critical perspective. The purpose of the company has been to create a show that not only sees part of Lope’s work, but also talks about Lope and “us as his spectators”. For Morfema, revisiting classical authors is an exercise that as creators should not be renounced.

The action of the play is located in the basements of a large fictitious corporation that catalogs the works of theater authors. Two officials, Ramírez and González, played by Isabel Díaz and Fidel Galbán del Val, are commissioned to prepare a report on the enormous production of Lope de Vega.

Both have pending quarrels as a result of the relationship with their superiors and conflicts triggered by their different points of view when selecting the material. He bets on humor, fantastic affairs, pure entertainment. She, on the contrary, prefers to delve into the human soul, and is haunted by another concern, which is the role played by women in classical theater.

Aimed at an audience over fourteen years old, Morfema has among its objectives to attract young people to the theater, since it is essential for the creation of new audiences and an effective tool for their training. In addition to using a language with which they can feel identified, the freshness in the interpretation and the dynamism of the staging are essential ingredients, according to the company.

‘The damn door of a haunted house’, from the Gran Canaria company Anartistas, will visit the Vegueta theater on October 9 and 10 at 7:00 p.m. Is amusing play of tangles results in a hilarious, rebellious, deep and critical proposal where the most universal themes embrace the present day.

Directed by José Piris, with text by Miguel Ángel Martínez and set design by José Luis Massó, this Roman pantomime, with a clearly contemporary reading, deals with a story that, through the genre of comedy, knots a convoluted and dizzying plot of characters in the pure style of Plauto .

This contemporary comedy, aimed at an adolescent and adult audience, will bring together on stage a cast of actors led by Jennifer Artiles, Rayco Marrero, Jacobo Santiago, Javier Ortega and Isaac B. Dos Santos. The young theater company Anartirtas, created in 2016, is characterized by its proposals full of messages and always loaded with humor, seeking to awaken consciences, fleeing from pedantry and boring theater.

The Guiniguada Theater will also host the premieres of ‘Checkered’, of the company Impro Canarias, on the 15th and 16th, and ‘Who lives. Desert prints‘, of Monica Aguiar, on Sunday 18. To attend these two productions, registration will open on the Festival’s official website on Friday, October 9 at 08.00 hours.

The artistic files of all Temudas shows can be consulted on the Festival’s official website, www.lpatemudasfest.com.