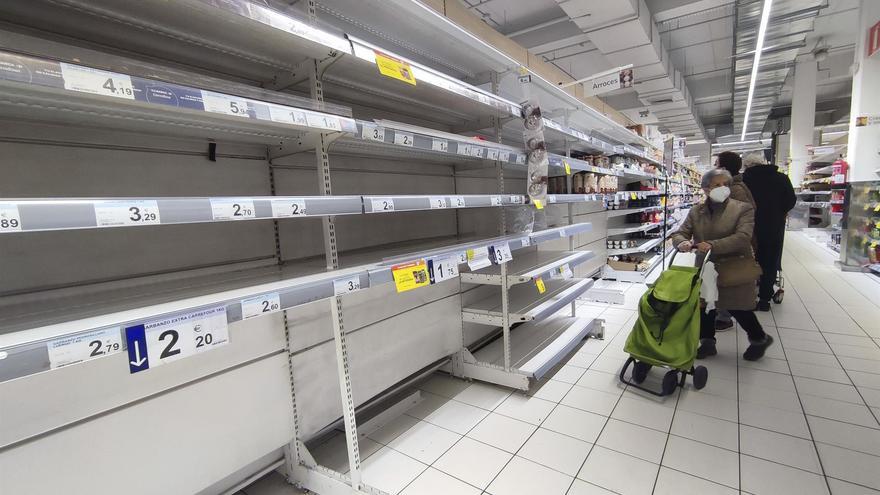 Inflation accelerated 9.8% in March in Spain compared to the same month last year, according to data advanced by the National Institute of Statistics (INE) this Wednesday. This is a record for the Consumer Price Index (CPI) since 1985, after the increase, also year-on-year, of 7.6% in February. The IPC has now been above 5% for 6 months.

The poor forecasts for wage increases rule out a price spiral

The extraordinary rate of inflation in March responds to the disturbance caused by Russia when it invaded Ukraine in international markets, which began to become stressed at the end of 2021 due to this serious threat, until literally condemning the country to a CPI of war in recent weeks.

"73% of this rise is due to the impact of the invasion of Ukraine on the prices of energy and unprocessed food," lament sources from the Ministry of Economic Affairs, which is headed by the first vice president, Nadia Calviño. "That is why it is urgent to deploy the National Response Plan adopted this Tuesday, which will allow this upward trend to be reversed, to curb the increase in costs for companies and families and to begin reducing inflation to more moderate levels in the short term," they continue.

Inflation reflects the rise in the prices of electricity, gas, fuel, important raw materials for industry such as aluminum or steel, and cereals in which Russia and Ukraine are key players worldwide. And this March he added supply problems due to the stoppage of road transportjustified precisely in the increase in costs, which impacted basic foods such as milk, oil or flour.

In monthly variation, compared to February of this year, inflation increased the pace up to 3 points. In this case, a maximum is established since 1977, in the midst of the oil crisis.

And if the core CPI is observed, which measures the evolution of prices by extracting the most volatile products from the shopping basket, such as electricity and food, it accelerated 3.4% in March, compared to the same month of 2021 , a record since 2008, after accelerating another 3% in February.

Inflation had been increasing at a rate since the first of last year due to bottlenecks in world trade due to difficulties in world supply to reactivate and meet the explosion in demand after the pandemic, having to overcome intermittent restrictions for health reasons. The last important one, the confinement of Shanghai, the financial capital of China, this week.

While the interannual CPI for February 2021 was slightly negative -compared to 2020-, in March of last year it advanced by 1.2%, which aggravates acceleration of this month of March 2022.

Inflation takes its toll on the poorest

Inflation rages on the poorest families. According to different studies carried out with Eurostat data for the eurozone as a whole, the lowest incomes are the ones that dedicate the most money with respect to their total spending on basic goods and services, which are the most stressed.

Specifically, according to calculations by the debt rating agency Moody's, the fifth part of European families with the least disposable income spends 15% on food and 7% on electricity and gas supplies and on different fuels. Meanwhile, the highest incomes spend only 11% and 4%, respectively, of their total spending on these same products.

“These products have a very rigid demand that makes it difficult to find substitutes (one can stop going on vacation if it is too expensive, but it is more difficult to limit heating in the winter months, for example), so the rise in Inflation is having an uneven impact by income brackets”, points out Rita Sánchez Soliva, an economist at Caixabank Research, in a recent report.

"The perverse effects of inflation on the lowest incomes are devastating, because they dedicate a greater proportion of their wages or income to basic products", agrees Professor Josep Bertran, who adds, on the other hand, that "the higher the inflation, more VAT is paid, since the same percentage is recharged on a higher price”.

Moody's analyst team demonstrates in a historical analysis that "when oil prices rise, consumer spending on food is more resilient than other spending." In short, and in line with the example of Rita Sánchez, it is easy to postpone the decision to enjoy a cruise in an inflationary context, but you cannot do without buying bread.