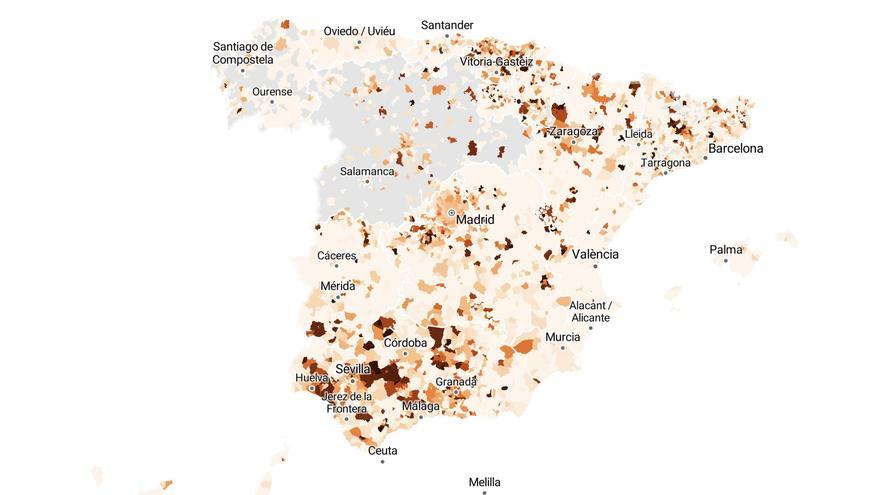 * Information updated with the latest data available as of June 1.

The sharp fall in infections after the rebound in April and the advance in vaccination have led Spain to the best levels of hospital occupancy and mortality since the summer of 2020. A situation of low incidences where it is necessary to be alert to outbreaks of the virus that can be expanded. Precisely, the latest data already warn of these rebounds: infections are rising again in 45 large cities with more than 40,000 inhabitants. The worst part of these outbreaks is concentrated in Andalusia, Castilla y León, Murcia and the Valencian Community, although the incidence rates of these municipalities continue in many cases far from the level considered as a high risk of contagion. The situation in Andalusia stands out: there are 13 of these 45 cities, and half of them are coastal towns in the province of Cádiz.

Among the 45 large towns in which infections are increasing, Antequera stands out, in Malaga, where cases have been triggered by an outbreak associated with nightlife (infections increase by + 334% in two weeks), Puerto del Rosario (+ 267% ), Algeciras (+ 220%), Gandía (+ 160%) or Sanlúcar de Barrameda (+ 156%). Despite these increases in incidence, only six large cities have more than 250 cases. Antequera is precisely the city with the highest incidence in all of Spain: it registers 399 cases per 100,000 inhabitants in 14 days. They are followed in the ranking by Santurtzi (Bizkaia), Arrecife (Las Palmas), Huelva, Granada and Portugalete (Bilbao) as the only cities with a very high risk of contagion.

At the other extreme, the best levels are registered in the municipalities of Telde (Las Palmas), Alzira (Alicante), Santa Lucía de Tirajana (Las Palmas) and San Bartolomé de Tirajana (Las Palmas) where the incidence is even below 10 cases per 100,000 inhabitants. These are cities that are in Spain that has returned to normal together with almost 4,000 municipalities (where 27% of the Spanish population lives) that register incidents below 50 cases. These are some of the results extracted from the analysis carried out by elDiario.es based on data from the Health Departments of 17 autonomous communities and the autonomous cities of Ceuta and Melilla. You can read more details about obtaining this data in the methodology.

Globally, confirmed cases of COVID-19 continue to decline in 842 municipalities where 51% of the Spanish population lives (last week it was 62%). They are rising 📈 in 532 where 22% of the population lives and they are in the plateau phase (they remain more or less the same as two weeks ago) in 113, where 11% live. The rest are very small municipalities where very few cases are registered - less than 5 every two weeks - or for which there is no information available - representing 16% of the Spanish population.

Many municipalities do not appear as there is no data available and some communities do not publish the total number of confirmed cases since the beginning of the epidemic. It must be borne in mind that the number of cases is closely related to the ability of health authorities to detect them. That is, the more tests or analyzes performed, the more cases detected. How many confirmed cases are there in each municipality and how is the current incidence in your locality? Check it out in the following table.