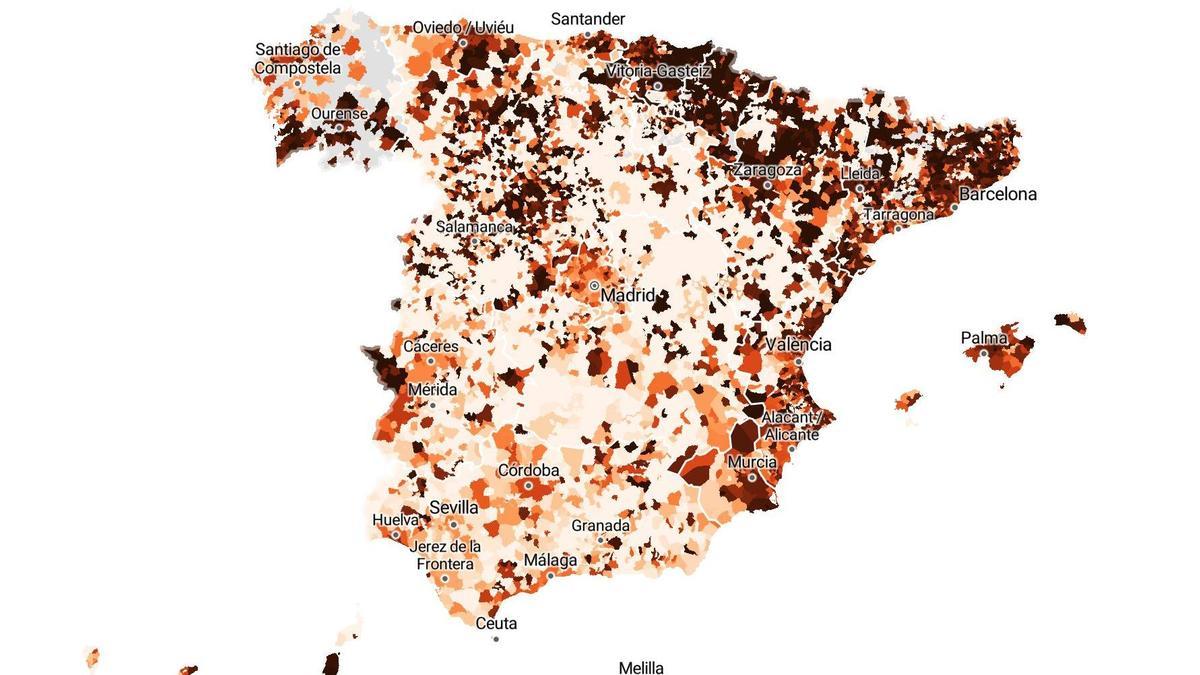 * Information updated with the latest data available as of December 14.

A short week before the Christmas holidays, the sixth wave of the pandemic continues to advance in Spain. There are already 43 large cities (one in four) that have exceeded the barrier of 500 accumulated incidence cases and in more than half (96 of 175) infections have doubled, tripled and even multiplied by four and five in the last two weeks.

The communities in the north of the Peninsula (Euskadi, Navarra, Aragon, Asturias) continue to be the most affected by this latest wave, and little by little the infections are spreading to other areas of the country. Catalonia, the Balearic Islands, the Valencian Community and Castilla y León are beginning to notice the rise in cases. Huesca, Ourense, Irún, Pamplona and Donostia are the big cities with the worst figures: all of them exceed 1,000 cases of incidence (Huesca almost touches 2,000) and infections continue to rise.

Despite the bad trend, it must be taken into account that this sixth wave is not comparable to the previous ones suffered, mainly thanks to the effect of vaccination. With almost 80% of the population with a complete schedule, the increase in infections is not translating into an equivalent increase in ICU beds and deaths, as it did previously. These are some of the results extracted from the analysis carried out by elDiario.es from the data of the Health Departments of the 17 autonomous communities and the autonomous cities of Ceuta and Melilla. You can read more details about obtaining this data in the methodology.

At a global level, confirmed COVID-19 cases are increasing 📈in 1,870 localities where 85% of the Spanish population lives, decreasing 📉 in 313 municipalities where 3% of the population lives and they are in the plateau phase (more or less the same as two weeks ago) in 94, where 2% live. The rest are very small municipalities where very few cases are registered - less than 5 every two weeks - or for which there is no information available - representing 9% of the Spanish population.

The map that opens this information shows the data of total confirmed COVID-19 cases, in 14 days and the trend of infections in each municipality of the autonomous communities that have published their contagion data in each locality: practically the entire territory to With the exception of the smaller municipalities of Catalonia and Galicia, which do not break down the figures for the municipalities with fewer inhabitants.

The data for each municipality used for this article show the same variable: the number of people who have tested positive for coronavirus and for whom their place of residence has been identified. Most communities include the data of positives by PCR test, antigen test and some also add the cases confirmed by rapid antibody test. This medium, which has been collecting data by municipality since the end of March 2020, calculates the trend in each municipality by comparing the number of confirmed cases in the last two weeks with the infections detected in the previous two weeks.

Of the 17 autonomous regions analyzed, Madrid is the city with the most infected people detected in a single municipality. However, the municipalities with the highest incidence rate (cases in 14 days per 100,000 inhabitants) are small towns in which an outbreak can affect a larger proportion of the population.

Some municipalities do not appear as there is no data available and some communities do not publish the total number of confirmed cases since the beginning of the epidemic. It should be borne in mind that the number of cases is closely related to the ability of health authorities to detect them. That is, the more tests or analyzes performed, the more cases detected. How many confirmed cases are there in each municipality and how is the current incidence in your locality? Check it out in the following table.

The Balearic Islands initially refused to share their data, although in the end they published it. Extremadura, under the same criteria, initially only published 8 most populated municipalities in the region. Now it publishes the figures even by local entities, villages and districts. La Rioja does not publish now those of the towns with fewer residents. They are not the only cases, practically half of the regions refused to publish their figures, arguing that they wanted to avoid the stigmatization of specific municipalities. Today, they all publish their data on COVID-19 cases by municipality.

These data are essential to combat a pandemic: they make it possible to detect sources of contagion and act accordingly, provide more information to local administrations and regional governments of neighboring communities, and facilitate the analysis of the impact of the epidemic.