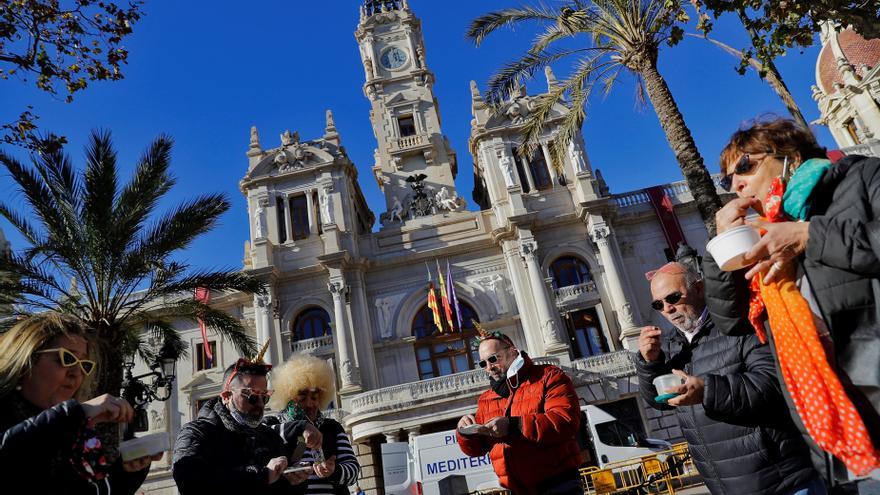 The contagion curve from December 10 draws a hectic upward slope, especially the one that reflects the cases reported from New Year’s Eve onwards. It is the dreaded Christmas effect that begins to appear on the graphs of the arid accounting of the coronavirus incidence.

But the numbers reflect what many have seen in the privacy of the classrooms: the restrictions were soft and families have come together in small nuclei, without fanfare, but with concessions. This happened to AV’s family, currently in quarantine and taking care of her husband while COVID-19 passes, after a Christmas Eve dinner from which everyone was infected except for her and her mother.

As established by the rules, there were six diners: the parents, A., her two sisters and her husband. They had taken precautions: they ventilated the house before dinner —but not during—, they kept a safe distance between people and they wore a mask, which they naturally took off to eat. They spent less than four hours together, in a flat in a Madrid neighborhood. It was the first time they had seen each other in a long time. They needed a moment to meet, to feel united. They did not know if they should get together but they were emotionally touched because at the beginning of the pandemic their grandfather had died, not because of COVID but due to a heart attack that the doctor and the family interpreted as a collateral effect of the sedentary lifestyle of the confinement. They allowed themselves that moment, let their guard down because they needed to feel together even briefly. “The result has been quite an unpleasant gift,” says A.

One or two of the sisters were the carriers of the virus (it is not clear if one of them had been infected before or was during dinner). They both play on a soccer team and had been having a drink with their classmates near the parties. At this meeting, they claim that they wore masks, kept their distance, but the virus jumped from one body to another (or others). On December 28, they received a call from one of the players: she was unwell and a quick test confirmed that it was COVID-19. The sisters were summoned for immediate testing and one of them tested positive. That same afternoon, A.’s husband began to feel ill. In a later test, the other soccer sister has also tested positive, like her father.

The four cases in A.’s family are part of the more than 30,100 that have been reported in the Community of Madrid during the two weeks of Christmas festivities (the last of 2020 and the first of 2021), which represents 451 cases per 100,000 inhabitants, an increase compared to the previous two weeks in December. The trend is on the rise throughout Spain, with an incidence of 321 cases per 100,000 inhabitants and 150,960 infections reported in the last two weeks. At an epidemiological level, on New Year’s Eve the alarms of this increase sounded and nursing professionals warned that, after the holidays, the consequences would be “terribleBut there was no immediate response and the path of polvorones led the Spaniards to the bells, with their loud illegal parties, and the massive attendance at the shops on the commercial streets of the main cities, as every year at this time. restrictions They didn’t get tough until the final minutes of the holidays, when all the fish was already sold.

Despite the fact that the day after Christmas Eve, A.’s family members dispersed to join other small family nuclei, no one else was infected in those three days. Neither A. nor his mother have tested positive, according to the medical hypothesis, because their immune systems were strong at the time. “I did not expect to end the year like this, it has been very hard. We have started 2021 each in his room, without being able to see each other,” says this woman.

The year has also started confined within the walls that make up the apartment where Alejandro M. lives with three people, in the center of Valencia. One of his classmates met with a group of friends for a picnic outside on Christmas Day, on the outside terrace of a house. One person from that group tested positive on the 29th and made it known to the rest. Alejandro’s partner took an antigen test and it came back positive, prompting the entire house to be quarantined immediately. One of the inhabitants of this floor is a hospital nurse in a ward for patients with COVID-19, so she knew exactly what had to be done and how, in such a way that they could contain the infections and only Alejandro and the person who attended the celebration became infected, the latter with a sore throat and loss of taste and smell. Alejandro is asymptomatic.

On January 2, he had an antigen test and it came back negative, but two days later he had a PCR that came back positive. Since the quarantine began in their apartment, on the 29th, they have kept their distance at home and spent the day with FFP2 masks, with the house “constantly ventilated, to the point of being cold” and disinfecting the bathroom every time it was used. But since the PCR tested positive, Alejandro has been locked in his room and his colleagues prepare food for him and leave it with a tray at the door: “It so happens that I work from home, from my room, in the I have a desk next to the bed, but of course, under normal circumstances I can go out to the rest of the house or take a walk and, like not now, I’m not very focused, “he admits.

What we are seeing in the incidence graphs are those moments of the holidays in which the guard has dropped? “Clearly,” says epidemiologist Fernando Rodríguez Artalejo, professor and director of Preventive Medicine and Public Health at the Autonomous University of Madrid. “But we are underestimating it because fewer tests have been done at Christmas. To have better data we will have to wait for the middle or end of the week of January 11, when we will return to a normal rate of tests and we will also see the clinical manifestations in the admissions of a part of those who have been infected “.

Although the symptoms – high fever, cough, phlegm, mucus and malaise – in A.’s family appeared four days after infection, Rodríguez Artalejo warns that the usual is five or six days and in many cases there are those who need seven per which, to assess it properly, we will have to wait for the data from next week.

With the curves in hand, some autonomous communities, such as Extremadura, La Rioja, Castilla-La Mancha or the Valencian Community have already announced new restrictions but, for this expert in epidemiology, “the sensible thing is to wait” to detect the full effect of the measures that have been taken. It is not just a matter of the five classic landmarks: Christmas Eve, Christmas, New Year’s Eve, New Year’s Eve and the roscón; “It is the entire vacation period that you have to see because people not only get together at the designated parties but it is a period in which they see each other more frequently,” he says.

The arrival of 2021 has left two million infections under the Christmas fir tree, more than 50,000 deaths and the threat of the imminent third wave. At least, about 30% of the population has received a vaccine as a gift from Kings, which should not mean a relaxation of restrictions or recommendations, as the experts point out.