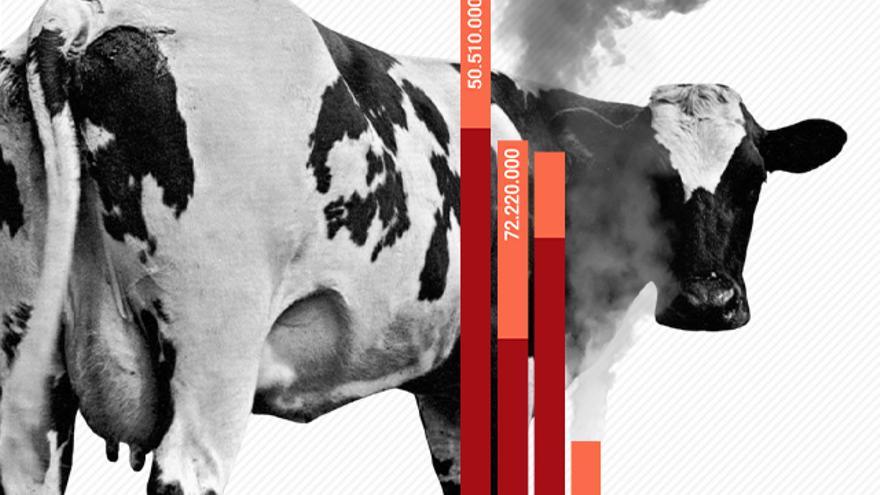 The unbridled, industrial production of a handful of large European meat and dairy companies emits as many greenhouse gases as entire EU countries. Their high level of pollution means that 20 of these corporations are enough to release three-quarters of all the CO2 released by Spain in a year or half of what Italy, France or the United Kingdom emit, as calculated by the Institute for Agricultural Policy. and Commercial (IATP).

Europe - and Spain - are increasingly producing meat and dairy products industrially. The EU has gone from 192 million tonnes of these products in 2013 to 207 million in 2018. Is there more demand? The FAO data managed by the IATP say no: consumption in those years went from 159 to 135 million tons: 15% less.

With production and exports to other countries, the gases released into the atmosphere responsible for the climate crisis have also grown. "It is a consequence of the uberization of the countryside", reasons Andoni García Arriola, a Basque farmer and member of the Vía Campesina organization. "This industrial model is behind these large greenhouse gas emissions, but also the disappearance of small and medium-sized farmers."

Raising many poultry, many pigs, many cows to sell their meat and milk with intensive formula imposes, among other things, a heavy CO2 toll: 474 million tons of direct emissions (converted into 664 million if indirect emissions are added) . They are 15% of the total for the EU with the consolidated data of 2018.

"There is a silent substitution of land-based farms by large corporations and funds that end up transforming these ranchers into low-cost workers in a production chain that responds to speculation, intensification and their climatic consequences ", adds this farmer.

"Producers are trapped in that supply chain because there are few buyers and they must adapt to what is asked of them to stay in business," the report concludes.

In fact, the impact caused by this intensive sector based on the concentration of animals has been highlighted by the reports of the UN Scientific Panel on Climate Change (IPCC). In August 2019, scientists called for an urgent change in the global diet to curb the climate crisis: "More vegetables and meat obtained with systems that demand less energy".

An industrial sector of this size is dominated in the EU by large corporations. What this organization has calculated is the footprint left by its large-scale activity: only 20 companies release some 244 million tons of greenhouse gases per year, according to the 2018 estimates from the Climate Accountability Institute. More than half of the entire sector.

The companies with the most emissions are those in the dairy sector that occupy the top four positions: Lactalis, Arla Foods, Nestlé and FrieslandCampina. Afterwards, the sectors are interspersed. This group includes some well-known firms, such as Danone and even, in 17th place, the Spanish company dedicated to the pig Coren Group.

The dimension can be appreciated by comparing these emissions (which end up thickening the crust of gases that trap heat and alter the climate) with those generated by the states of the Union themselves. Those 244 million tons are 73% of all the CO2 emitted that year by the fifth largest economy in Europe, Spain. And half of the continent's leaders: Great Britain, France and Italy. They are 28% of Germany's emissions.

The Institute has equated all these emissions with the amount of coal (the fossil fuel that releases the most CO2 into the atmosphere) that would be needed to release that amount of gases and concludes that 119 million tons would have to be burned (almost half of the mineral that actually used the EU that year).

The work has been able to verify, for the cases with which it has had data, since it complains that the information is often "incomplete, not very comparable between companies and even non-existent", that companies increase their emissions from the hand of its greater production: Lactalis and Tönnies show big jumps of 30% in a couple of years; Danone 15% or ABP meat 45%.

What this analysis underlines is that the European meat and dairy model carries a price in the form of global warming to sustain a production that grows, to a large extent, to sell in foreign markets rather than to satisfy its own needs.

With that reality on the table, the report questions that "limiting the focus to reducing meat and dairy consumption in Europe will have little effect on cutting emissions from this sector." And he argues that, although this meat consumption "is twice the world average [64 kg per cápita frente a 34 kg]"This strategy" falls short as long as the enormous influence that the region has on global exports of these products is maintained. "

The production formula that is being imposed is also leading to the extension of industrial crops to feed the cattle herd based on imported feed. The farmer García Arriola points out this as a key point: "We rely on the land to feed the animals and we contribute organic matter to the soil compared to the industrial model that is based on the importation of food for his herd." The purchase of food by the industry - as opposed to that generated on the farm - grew by 13% between 2006 and 2017, according to this report.

The research also tries to break the dynamics that focus the environmental responsibility of the food sector either on the grassroots producers or on the consumers. "He usually faces these two groups," they explain. And they illustrate it with two sentences: "That the producers produce in a clean way"; "That consumers look for products in another way."

However, the document says that "this ignores where the power in the system resides, which is in a few dominant agents who control how food is grown and produced and how it is distributed throughout the world: they dictate prices and, often, they pay producers below their costs. "

This has been one of the recurring demands of the Spanish agricultural sector: that distributors buy their crops or their milk at prices that force them to sell at a loss. Last week, Congress approved the Food Chain law that will try to stop this dynamic, according to the government's opinion.

In addition, investments to adapt to new practices ultimately "fall on producers while the supply chain remains the same and the prices paid for their milk or meat do not reflect the cost of these new practices," they say.

Andoni García Arriola explains that "when there is a debate about the climate, the focus is placed on livestock when one type or another is not the same. And it is essential to distinguish it." He laments that "in the end, it becomes generalized and the small ones are left unprotected against the large corporations that can clean up their production, for example, by buying carbon credits while they continue to emit gases. We are involved in a dynamic that does not differentiate so that the consumer knows that there is another way to produce more sustainable ".