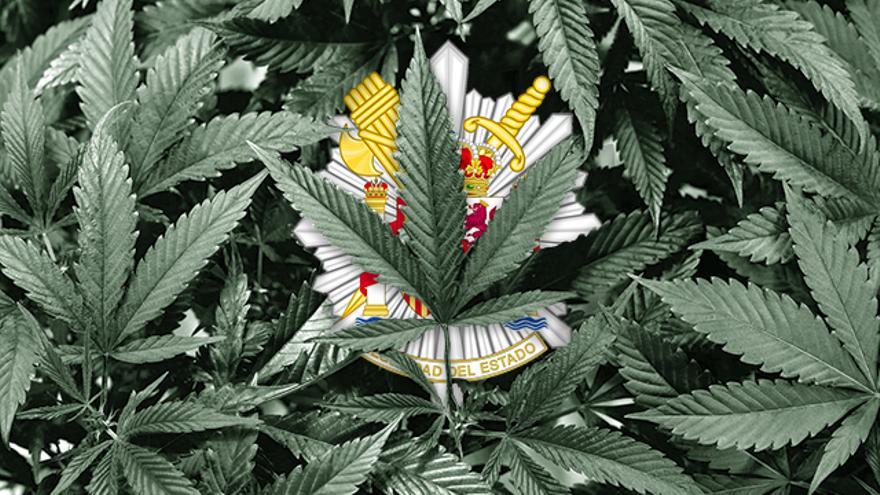 September 15, 2021. Five national police officers are detained by Internal Affairs accused of collaborating with an organization dedicated to the trafficking of marijuana. The arrest of the agents will be a drop in the ocean of arrests that accumulates the year - in 2020 there were 3,840 arrests for cultivation and trafficking of cannabis plants - but beyond the figures, the fact that they are agents of the authority and constituting the entire group of narcotics of the National Police in Mérida gives an account of the status it has achieved and the power of corruption achieved by this type of organized crime.

The growth rate of marijuana seizures by the State Security Forces has grown by 150% since 2015 and the seizure of plants, by 305% in the same period, with a special rebound in the last three years. Marijuana trafficking is already the "third criminal activity" in Spain behind hashish and cocaine trafficking, according to a reserved report from the Intelligence Center against Terrorism and Organized Crime (CITCO) to which elDiario has had access. .is.

"The high economic performance of illicit production and trafficking, the criminal inferiority of crime in relation to other drugs, a certain social acceptance by some sectors as a supposed 'soft drug or with alleged therapeutic properties', the increasing use of ICT [grow shop y clubes] for the illegal trade and the current economic crisis, which can cause vulnerable people to be employed by criminal organizations for the cultivation and trafficking of this drug, are factors that affect this phenomenon ", states the aforementioned report, intended to carry out a "Threat assessment" in Spain.

CITCO's work has been used by the Ministry of the Interior to develop a plan to combat the criminality involved in the cultivation and trafficking of marijuana. "The threat to public health grows constantly and worryingly," said Minister Fernando Grande-Marlaska in his presentation to the media on December 14. The Interior Minister and the plan presented itself avoid some controversial statements in the report, such as references to insufficient criminal punishment for marijuana trafficking or to questioning the therapeutic use of the substance. In any case, the government's response to the phenomenon is so far exclusively police. Last October, the PSOE overthrew the first law in Congress proposed by leftist and pro-independence formations to decriminalize all uses of marijuana. The socialists were joined by PP, Ciudadanos and Vox in their vote against the approval of the text. Marlaska said at the press conference that the Interior plan "has nothing to do with the open debate in parliament." Its objective is "the crime associated with the production and trafficking of marijuana."

The boom in the cultivation and trafficking of marijuana in Spain has reasons inside and outside our borders. Hash and marijuana are the psychotropic substance most consumed in the European Union and Spain has optimal characteristics to have become an exporting country. In the first place, "adequate climatic and soil conditions", as well as "large unpopulated areas" where to practice cultivation. outdoor (abroad), includes the CITCO report.

Police experts add that Spain is a country with "easy and legal access" to the purchase of cultivation equipment and seeds, even for the acquisition of "sophisticated growth equipment that is not only found in the growshop or specialized stores, "also" gardening stores or hardware stores. ”Whoever wants to acquire knowledge for this, they add, has at their disposal advice on the Internet, the aforementioned specialized stores or cannabis clubs.

To this context, for cultivation, a kind of marijuana culture is added that is favored, always according to the police, due to the lower criminal punishment that the trafficking of cannabis derivatives has compared to other psychotropic substances. This statement is questioned from the legal field. The Penal Code does not mention narcotic substances; what it does is raise the penalty in article 368 if the product causes "serious damage to health."

The CITCO report itself raises the alarm regarding a practice in this regard that has been detected in seizures in recent years: "A higher concentration of THC in illicitly cultivated plants due to the use of genetic improvement techniques." THC (Tetrahydrocannabinol) is the component that causes the "high" and mental health experts have been warning of the damage that these genetic alterations are causing in plants. Attention in the emergency room has also grown due to poisoning. Marijuana, the report warns, is being mixed with synthetic cannabinoids that imply "greater psychotropic potency and with as yet unidentified medium and long-term side effects."

This "psychotropic potency" is necessary to prove its incidence in the seriousness of the crime before the courts. The seizure of a plantation can remain in a degree of attempted traffic not consummated if the marijuana plants have not yet developed the buds that are then smoked. Nor is there at the moment jurisprudence on the crops themselves.

In order to demonstrate how much drug was being produced, it is the agents themselves who have to cut and dry a representative sample of the plants, according to the reserved report. They do it “in the air or in dryers at a certain temperature (so that the product does not lose its psychotropic conditions), and once this operation is carried out, they are weighed dry and an extrapolation is made of the amount of marijuana that could be extracted from the whole plantation ”. "With this information, the criminal sanction is set," concludes the police report.

All this causes a problem of housing the large quantities of seized marijuana. In 2020 alone, 1,700,462 plants were seized, roughly triple the number in the Netherlands, which historically led marijuana production in Europe. That is why CITCO proposes to speed up the mechanisms for their destruction, saving those that are necessary to prove the criminal offense, as well as the materials requisitioned for their cultivation.

The enormous amount of artificial light that crops require indoor (interiors) makes the police also propose to collaborate with the electricity companies to detect plantations. The export of crops abroad, hidden in trucks, but also through a parcel company, motivates them to request more control on roads and from the shipping firms themselves.

Police experts are concerned that the growth of the business and its profits is causing clashes between groups. The report affirms that “the increase in the level of violence associated with the theft of marijuana between organizations and clans in the indoor continues to increase ”.

Most of the 3,840 arrests linked to alleged groups dedicated to the cultivation and trafficking of marijuana were by Spaniards, but in the last five years there has been an exponential growth of Chinese citizens among those investigated, followed by British, Serbs and Moroccans. Police have also detected a strong presence of Albanians since 2019.

“On many occasions, the networks dedicated to this traffic buy whole crops from small producers and sell them in Europe, mainly to countries such as France, the United Kingdom, Germany, Poland, Estonia or Lithuania. In addition, they combine this activity with other traffics such as hashish, cocaine or synthetic drugs, which they access through marijuana trafficking ”, the report states.

The cultivation and trafficking of marijuana, experts warn, causes its own ecosystem of related crimes. In farms dedicated to cultivation, they point out, criminal organizations "employ people in exploitative conditions, so there are clear connections with trafficking in human beings for the purpose of committing crimes and / or for the purposes of labor exploitation."

The CITCO report proposes to promote cross-investigations with these other crimes as well as to deepen, as is done with cocaine trafficking, in the patrimonial investigation of organized groups in order to seize their assets. The proliferation of plantations indoor it is such that the agents dare to speak of "stimulating a parallel real estate market dedicated to this activity", to which must be added the occupation of houses for such use.