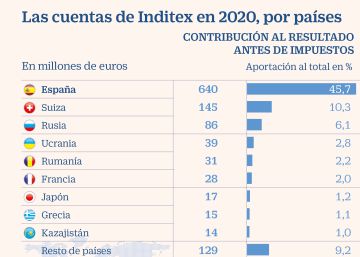 Inditex managed to save financial year 2020, the most complicated in its history, with a profit of 1,106 million that many companies would want for themselves in the middle of a pandemic. However, these difficulties posed last year are not only observed in data such as the fall in profit (70%), sales (28% to 20,402 million) or commercial area, something that had never happened. Also in the country-by-country analysis.

For the first time, at least since reporting this data, Inditex posted pre-tax losses in nine markets. This is reflected in the non-financial report that the company deposited yesterday with the National Securities Market Commission, in which it breaks down the contribution that the main countries in each market, as well as all of these, contributed to the consolidated profit prior to the payment of taxes. (BAI).

This was 1,401 million euros, 70% lower than the previous year, a fall in line with that of the net result. The nine countries that registered negative results on this variable were Italy, the United States, Mexico, Brazil, Canada, Hungary, Belgium, Australia, and Portugal.

The first two with a loss before taxes of 48 million, which drops to 43 in the case of Mexico and 30 in Brazil. Especially relevant are the cases of Italy and Mexico. Italian is the fifth most important market for Inditex in terms of store numbers, with 357 at the end of the 2020 financial year, while Mexico is third, with 415. The United States is the sixteenth with 99, while Brazil is outside the top 20 with 60.

If the analysis is carried out by geography, Inditex’s non-financial report shows that in America the loss in this concept reached 129 million, when in 2019 it gained 359.
Of the four geographies into which it divides its business, this was the only one that closed negatively, while the other three suffered significant drops. In Asia and Rest, the result before taxes was 60 million, 91% less; in Europe 388 million, 77% lower, and in Spain 640 million, 35.4% below the levels of the previous year.

As usual, Inditex generates most of its profits at home. Those 640 million BAI represent 45.7% of the total, an increase of almost seven percentage points over the previous year, and are above the sum of the rest of the markets.

The explanation is in the headquarters effect. The BAI does not necessarily reflect the profitability of operations in each country, but these are conditioned by international transfer pricing regulations. This attributes to each market a contribution associated with the performance of the design, supply, logistics and distribution functions. That is why a country like Switzerland, which is not important in number of stores but where the group has portfolio companies, is the second with the best BAI with 145 million.

On the other hand, Inditex paid a total of 467 million euros in corporate tax last year, 58.4% less due to the lower profits recorded.
Once again, the country where it collected the most for this concept was Spain, with 103 million or 22% of the total, and that represents a drop of 72% compared to 2019. The second in this concept was the Netherlands, with 82 million, another country where Inditex has a series of holding companies.

In addition, the non-financial report reflects a total tax contribution of 4,689 million euros, of which 1,916 million corresponded to own taxes, such as companies or Social Security contributions; and 2,773 million to taxes collected.

Process. In its accounts for the 2020 financial year, Inditex introduces a new nuance with respect to the considerations it had made in previous years regarding Brexit. The company recalls how the entire process has evolved until the United Kingdom ceased to be a member of the European Union on February 1, and also reflects the agreement reached by both parties at the end of last year to regulate their commercial relations.

Regarding this, Inditex says that the United Kingdom has become a “Third country”, despite the fact that said pact “goes beyond the conditions of a common free trade agreement.” This implies, the company continues, that it is “inevitable that obstacles will arise in the trade of goods and services (…) that will affect all interested parties.” For this reason, and despite the fact that a no-deal Brexit scenario has been avoided, Inditex says that the “current circumstances incorporate new operational and business needs”, known in “many of the markets where the company operates but new in the British market ”.

For this reason, it has “taken the necessary measures to mitigate the impact of Brexit on its operational processes, especially in relation to the supply chain, distribution and labor issues”, and has “redesigned some supply, transport and distribution flows ”Between EU and British soil.