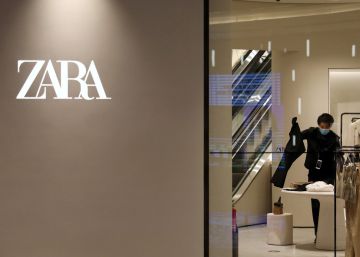 Inditex closed the first quarter of its fiscal year, between February and April, with revenues of 4,942 million euros, a growth of 49.6% compared to the same period last year, in which it had its stores closed for a month and half. If compared with the data for 2019, the turnover is still 16% below the first quarter of that year.

The profit in these first three months of the year amounted to 421 million, compared to the losses of 409 million that it registered a year ago and that were the first in its history due to the provisions made in the face of the effects of Covid-19.

Both variables, sales and profits, are above the forecasts that analysts have set in recent weeks. The Bloomberg consensus it marked an income in the surroundings of the 4.880 million and a gain of 360 million. According to Inditex, the results of this first quarter “show a progressive recovery”, still suffering significant restrictions in some of its markets. For example, temporary closures in the UK, France, Germany, Italy, Portugal and Brazil. Between February and April, the limitations meant that 24% of the business hours were not available to the group. Furthermore, at the end of the period 16% of its stores were still closed. At present, that percentage has fallen to 2%.

What continues to grow strongly is online sales. This has increased by 67% in the first quarter at constant exchange rates, an even higher percentage than that experienced in the same period last year, when the confinement triggered the demand for this service by 50%.

Inditex’s recovery advanced during the first three months of its 2021 financial year and has accelerated at the start of its second quarter. According to the data provided by the company today, in-store and online sales at constant exchange rates between May 1 and June 6 have grown 102% over the same period in 2020, and 5% over the same 2019 period, despite the fact that 10% of the sales hours have continued to be unavailable.

The ebitda of the group during the first quarter reached 1,235 million, 155% more, and the ebit was positive in 569 million, for the negative 508 of a year ago. Inditex’s net financial position climbs to 7,176 million, 25% more and the highest figure for the first quarter.

Another indicator that improves is the gross margin, very followed by investors and analysts. This reached 2,962 million, 59.9% of sales, 1.5 percentage points more than in the same period last year.

What is also advancing is Inditex’s store reduction program. At the end of April, the company had 6,758 stores, 654 less than a year earlier. During the first quarter, Inditex carried out openings in 21 markets, as reported. It should be remembered that this program of store takeovers accelerated as of June, precisely when Inditex reported the results for the first quarter of last year.

The formats that have suffered the most from closures have been those of Zara, adding 239 closings, followed by Bershka with 103 and Pull & Bear with 85.

On the other hand, Inditex has confirmed that it will propose at a general shareholders’ meeting, on July 13, the approval of a dividend of 0.70 euros per share, made up of two equal payments of 0.35 euros, the first already made on last May 3, and the second on November 2.