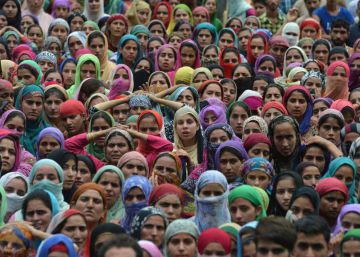 India has approved on Tuesday a law that criminalizes the triple practice of Muslim sentences with up to three years in prison talaq, with which a man can instantly divorce his wife by repeating the word three times talaq or "I got divorced." It is a new step of the Indian Government in its offensive against this practice, which does not require the presence of the husband at the time he leaves his wife. The man can even perform the rite through a phone call, a letter or social networks. In September of last year, the Executive approved a decree punishing this rite, after having failed in its attempt for the House to approve the ban. Now Parliament supports the initiative. A year before, the Supreme Court had declared this law unconstitutional.

The norm pursues with up to three years in jail those who resort to this practice to divorce. The activists, who vindicated the cessation of this patriarchal tradition, celebrate that Parliament has supported the initiative. They denounce that the rite allowed husbands to expel women suddenly from home, leaving her on the street. Another part of the population, the more traditional, alleges that the new law will destroy families dependent on their husbands by condemning them to prison terms.

The Law for the Protection of the Marriage Rights of Muslim Women has been supported by 99 deputies – and has had 84 votes against – of the 241 members of the Rajya Sabha (Upper House) of the Indian Parliament. The rule, which had already been rejected by the Chamber in a previous attempt, comes forward thanks to the absence of a dozen opposition parliamentarians and the abstention of another group. This has reduced the number of votes needed to reach the majority.

This is an occasion to salute the remarkable courage of those Muslim women who have suffered great wrongs just due to the practice of Triple Talaq.

The abolition of Triple Talaq will contribute to women empowerment and give women the dignity they deserve in our society.

The approval of this law represents a victory for the BJP Hindu party of Prime Minister Narendra Modi, promoter of the initiative, who did not have enough votes to get the half plus one required. "An archaic and medieval practice has finally been confined to the garbage dump of history! Parliament has abolished the Triple Talaq and corrects a historical error against Muslim women. This is a victory for gender justice and equality in society." , has posted Modi on his Twitter account shortly after the vote.

The Congress Party, the main opposition formation in the Senate, has expressed its disagreement with the norm, arguing that the content of this ruling fails to offer guarantee and security to women. "Who will pay compensation to the victim (wife) if the husband is in jail? Will the government give them compensation? The bill has a three-year prison term. But what will happen? Can they remain a husband and wife? woman after three years? This bill will destroy families, "said Satish Mishra, one of the law-abiding legislators, during the debate.