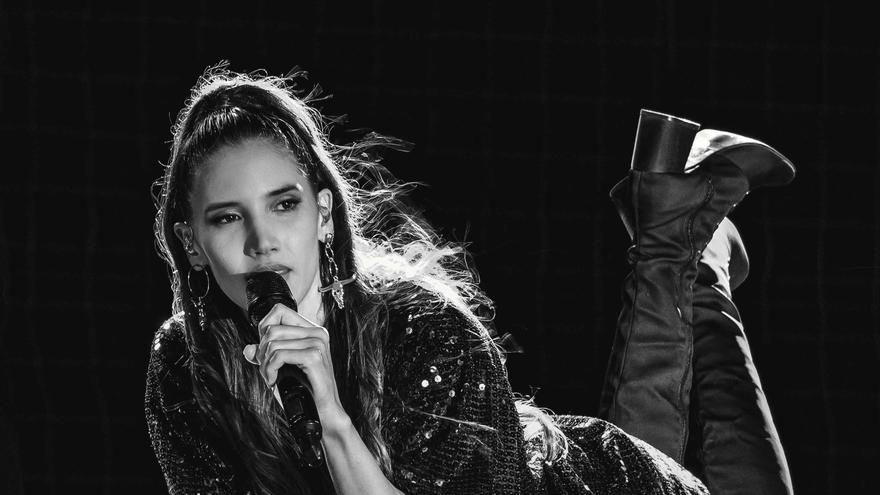 Every time India Martínez sings, a silence is imposed around her. It is something almost automatic. And you don’t need too many words for it. Tone accurately, of course. But there is something else: it has an enormous sensitivity to entertain the ears and, especially, to temper the soul. He does it here, in the first person, but also behind each of the songs he has given warmth. With ’90 minutes’, ‘Cats don’t bark’, ‘With me’, ‘I forgot to breathe’ or ‘Hungry heart’ precisely this happens: she opens her mouth, sticks out her claw and, suddenly, there is no sigh that can hold in the entrails. All the senses are concentrated around your throat. And it is then that the public realizes that she has always been there, relating life to us, accompanying in the distance and, ultimately, appeasing that din that surrounds us so much today.

She has been doing it since 2004, when her art propelled her to a recording studio. With ‘Azulejos de lunares’ he not only conquered the critics, but also those who, from that moment, have not been able to take their eyes off him. Or rather, ear. His voice is to blame, though not entirely. If for something he has achieved four gold records (‘Trece verdades’, ‘Otros verdades’, ‘Camino de la buena luck’ and ‘Te Cue un Secreto’) and one of platinum (‘Dual’), it has been for its ability to cross the chest. India is one of those few artists who can strike a chord with just one note. Everything it transmits has a value, a spirit, an emotion. And, of course, that way it is impossible not to silence the patio. When she interprets, the world listens. Instead, when it ends, it transforms it.

“I have always been clear that I was not only going to sing flamenco. Hence, I have tried to expand my range”

-Where does your voice come from?

-From deep inside. Since I was little, I have been a bit shy and reserved, to the point that it was difficult for me to make friends and speak without shame. Music has helped me to be a good communicator: what I did not express in words, I turned into songs. To give you an idea, the first time I fell in love, I recorded a cassette tape as best I could and left it to the boy I liked at the door of his house.

-And what could break it?

-The deep crying, the one that comes from the heart. That is the only thing that makes me unable to continue singing, it is another way to express my feelings.

-When you interpret ’90 minutes’, ‘Everything is not coincidence’ or ‘Cats do not bark’, it seems that it is going to split in two.

-It is incredible that these songs continue to excite me like the first day. Or even more. To this, we must add the thousands of followers who have come to live that encounter with me. They are hymns because they have made them their own. They are part of his life, they have not lost freshness.

-Have you had to sacrifice flamenco to have greater commercial success?

-No. I have always been clear that I was not only going to sing Flemish. Hence, I have tried to broaden my range: to this genre I have been adding Arab, Latin, populous dyes … that mixture is me. When I want to play flamenco, I play it. When I prefer to version something, I version it. And so. It is true that, until I was 17 years old, I was a cantaora. But I have never had to deprive myself of anything because my essence remains the same.

– If tomorrow we could change the anthem of Spain, what would be your bet?

-Any song from ‘The legend of time’, by Camarón, would be a good option.

This moment will be recorded in my ❤ Grandmother😍😭 pic.twitter.com/R44gk9CxGp

“I can’t feel more proud of my homeland. Wherever I go, it escapes me”

-What does your country transmit to you?

-I can’t feel more proud of my country. Wherever I go, it eludes me. It comes out of my pores. I am very proud of that mix of culture, history and tradition that we are. This heritage is what makes us so rich. We have to take care of it and value it, but above all look forward.

-Complicated … at a time like the one we have had to live.

-Yes, a lot of things have come together: coronavirus, political confrontation, inequality, machismo … The worst thing is that there are people who want to take advantage of a situation like this. Therefore, it is essential to train and inform yourself so that we are not deceived or influenced. We need to continue growing so that, in the future, what is happening does not leave us scars. You have to try to turn the page, but without forgetting.

-In fact, that is one of the exercises you have done in your book, ‘Half Truths’. What was the hardest thing to let out?

-Really, it has not taken me a great effort to go back to the past and talk about the girl I was with today’s eyes. On the contrary, it has given me more strength. Also, writing prose has freed me up a lot. However, something that has hurt me has been remembering people who are no longer there.

-Your roots are very present both here and on your latest album, ‘Palmeras’. What do you think of those who deny their origins when they are humble?

-I have also gone through that phase, so I can understand who has not yet taken the step. This happens because, on occasion, you feel that doors are closed or that they look at you differently … and the reality is that no one chooses where they are born. You live with it, it is part of you. If you grow up in a place with fewer opportunities, you have no choice but to fight twice and dream twice. Why deny? No matter where we are, we are all the same.

-What would you say to those girls who today grow up in a humble house and want to fly very high?

-That they dream as big as they want because they can get it. They are their own limit. Betting and aiming high, at least you will reach the half. Sometimes, even without expecting it, you go further and beautiful things appear that you had not even imagined.

“When I was little, I didn’t wonder if I was a man or a woman. I did whatever I wanted.”

-Have you ever felt uncomfortable in the world of music?

-Not only in him. In the book, I have stopped to reflect on what I have felt as a person in various situations and I have come to wonder why they have looked at me in such a way, why have they judged me in a certain way, why I have not been able to do such a thing … For being a woman? That makes me powerless. In my house, my father and my mother have raised us without any distinction: playing and dressing as we wanted. In the end, you end up surrounding yourself with colleagues who think like you and who do not make any exceptions between the sexes.

-That danger abounds in social networks– Every time you upload a photo with your sisters, you get terrifying comments.

-I am struck by the fact that there are subjects who are dedicated to criticizing so harshly: a photo that has no evil at all, such as posing in a bikini on the beach, gives wings to certain people to judge us as they want. So much so that I have received messages telling me that my job is to sing and not pose. What they do not understand is that, behind that profile, there is someone who cannot make a clean slate. We artists play at a disadvantage: the one who hides behind an anonymous or false profile is a brave coward because, afterwards, he is not able to tell you to your face.

-Will we get to live a music industry that is not sexist?

-It is difficult because there is a genetic difference between men and women. We are different, but we all have the right to equal opportunities. It is a complex issue because it is very easy to find people with very closed minds. And until that does not change … New generations have to come that have that basic equality: women, men, trans, gays, lesbians, blacks, whites … We have had to live in this time and we have to fight.

-What would have happened if India Martínez had been a man?

-When I was little, I didn’t wonder if I was a man or a woman. I did what I wanted. And so I continue to do today. Answering your question, I think my ideology and my way of being would have been similar.

“I think mistakes are part of the way: they make me learn from things to come”

– Do you think that something should be changed in the educational system?

-I have several nephews and I have realized that, depending on the school they go to, there are more or less open minds. Last year, my sister braided her son to go to class. He loves them. However, one day he arrived and asked him not to comb his hair like that again because they were messing with him. Now, we have changed him to a more international center, where he has met many other boys who do like braids. At first, he was a little thoughtful, but the next morning he asked his mother again. Since then, he has always wanted to wear them because it feels good and integrated.

-No problem. When I have a flash that I don’t like, I try to add something good to it. I think mistakes are part of the way: they make me learn from things to come. Nobody is perfect. In any case, we must worry about doing the least possible harm to others and to ourselves.

-If you now run into India Martínez in a decade, what?

-I would thank you … because that me from the future is also part of who I am right now.