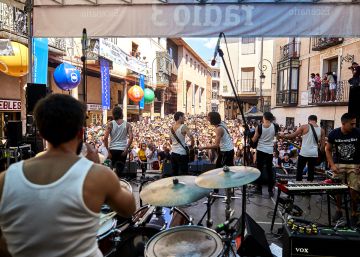 They are not few or irrelevant. That is the message that independent music companies want to launch after the celebration of the Odeón awards, the awards destined to recognize the best artists of the year in Spain and that has affected the gap that exists in the Spanish music industry, divide between multinationals and everyone else. Organized by AGEDI (the nonprofit association for copyright management of phonographic producers) and sold as “the Goya of music”, the Odeons left out a broad sector of the business, in which dozens of agglutinate of independent stamps that invoice more than 63 million euros and represent 98.5% of Spanish phonographic producers, according to data from the Independent Phonographic Union (UFI).

“We claim our right to be represented. These awards are partly funded by AGEDI, which includes multinationals, but also independent labels, ”argues Carla Varona, a UFI spokesperson. “It was a gala for the great record labels. It is tremendous. Leaving us out has been an absolute mistake, ”says Carlos Galán, director of Subterfuge Records, a company that has been operating as an independent since 1992.

According to the most recent UFI report, not yet made public and to which EL PAÍS has had access, the turnover of independent companies exceeded 63 million euros in 2018, which meant an increase of more than 9% compared to last year. This volume of business shows the value of the independent in the market, but there is something equal or more important: for more than three decades they tend to energize the scene for their attitude of taking risks and tracking new talents. Some talents that, in many occasions, end up being hired by one of the big companies. “It’s something that happens since the independent industry in the nineties began to be remarkable,” says the director of Subterfuge Records. “To us, for example, from the beginning they took Dover, Fangoria, Marlango … We were the Osasuna against Real Madrid or Barcelona.”

The UFI radiograph, which has 72 partner seals, shows that the independent type company has 12 years of existence and six employees on average. And each one has an average of eight artists. “Independent music has long ceased to be the anecdote. It is a solid industry. Proposals grow around us. We have a future perspective, ”says Galán. The independents published in 2018 more than 3,200 albums of all genres, from flamenco and folk to metal, trap and reggaeton. A stylistic diversity that in the Odeón shone by its absence: the 11 awards, including the honor that José Luis Perales received, were monopolized by melodic pop musicians.

The Odeón awards were driven by the three most powerful Spanish labels, belonging to the three giants worldwide: Warner, Universal and Sony. The 11 awards were distributed: Universal took five, Warner added four and Sony stayed with two. The day after a gala full of technical failures, Coque Malla, who was in the courtyard of the Royal Theater seats, wrote on his social networks: “It was very clear which was the philosophy and the line to follow, and from the heart I think it is a tremendous and disastrous mistake. ” “These are prizes that have been taken from the sleeve by the rich for them. They live in a gold cage, ”says Kiko Veneno, recognized in 2012 as the National Prize for Current Music, awarded annually by the Ministry of Culture.

Outside the centripetal universe of the great record labels, accustomed to capitalizing also the programming of the radio-formulas, a clear shout is heard: Spanish independent music also exists. On that side of the business is Kiko Veneno, but also other names recognized with the National Prize for Current Music such as Santiago Auserón, Carmen París and Javier Rubial. And many more. Just look at the list of the last winners of the Independent Music Awards (MIN), a gala that the UFI has been organizing for 12 years: Morgan, María Arnal and Marcel Bagés, Bizarro Love Triangle, Vetusta Morla, El Langui , Belako, Izal, Xoel López … All are names that fill theaters and that are part of many posters of the essential circuit of Spanish festivals, ignored by the Odeón and that is so important for billing live music in Spain, but also , as Kiko Veneno says, where “the taste and love of young people” is encouraged.

As Guisasola acknowledges, the main logic of the Odeón awards was basically one: sales. According to the bases of the awards, “to determine the winners in the categories of Best Song, Best Album, Best Video, Best Flamenco Album and Best Direct, the annual data of the sales lists or, where appropriate, were taken into account other objective sources, such as number of visualizations or tickets sold ”. The public could participate by choosing the Odeón Artists of the year, voting for their favorites through the official page of the awards. Their votes were not decisive because they crossed “with the criteria of the organizing committee formed by the official representation of the industry, which will determine the initial proposal of candidates taking into account all sales, listening and visualization data generated throughout the year “

“It leads to the demonization of minority tastes. You feel a little guilty of not being a majority, ”laments Kiko Veneno. If this logic were applied to the world of cinema, the Goya, a ceremony to be held this Saturday in Malaga, would already have a winner. The best movie of the year would be the highest grossing, that is, Father there is only one from Santiago Segura. Nothing would have to do, therefore, the nominees as Pain and glory by Pedro Almodóvar, While the war lasts by Alejandro Amenábar, What burns by Oliver Laxe or Outdoor from Benito Zambrano.

In the absence of an academy such as those of cinema, theater or television, music in Spain lives parallel realities. “Music is much more than numbers and is far from being treated objectively because it is the opposite: it is subjective, it is emotion, it is true, it is authenticity, it is creation, it is risk, it is fusion, it is magic, it is quality … To relegate it only to sales is to kill its essence and deny the reality of what is happening, ”says Carla Varona. Kiko Veneno concludes: “Art doesn’t give a damn. They don’t hide it. It is a contempt for the real culture. That in the Spain of Falla and Camarón they give the prizes in this way is a pain ”.

this is how neoliberalism was established according to Andrés Lima