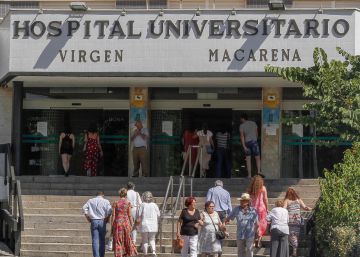 The Ministry of Health of the Junta de Andalucía has raised the number of patients to 46 admitted to hospitals due to the listeriosis outbreak and 71 people infected in the region, as reported on Sunday through a statement. The activation, on Thursday 15, of the health alert about the product that caused the infection, a meatloaf, has been noticed in the increase of visits to the Emergency Department in the Sevillian hospitals of citizens afraid of having become ill.

Health sources confirm the upturn of up to 10% of the influx of people in the Emergency Department of the Virgen del Rocío Hospital between Friday and Saturday. Other hospitals in the Andalusian capital have also experienced an increase in arrivals of patients with gastroenteritis or fever, symptoms associated with listeriosis. All those admitted are treated in the different hospitals of Seville and the Aljarafe. Four of them are in the ICU. Regarding the 71 cases registered in the autonomous community since the outbreak will begin earlier this week, 57 have been located in Seville, five in Huelva, and three in Malaga, Granada and Cádiz, respectively.

The Board continues investigating the loss of a baby in the last three months of gestation by a pregnant woman who entered last Monday at the Virgen Macarena Hospital in Seville on the occasion of a hemorrhage due to displacement of the placenta. The Ministry of Health is cautious and, for the moment, has unlinked the death of the fetus from the listeriosis outbreak, although the placenta was infected by the bacteria. “At the moment there is no record that the mother ingested the meat from the infected brand, or that she had the germ. All the necessary analyzes are being done to confirm that there is no relationship, ”sources of the counseling explain.

The first isolated cases of listeriosis were known at the end of July. The Ministry of Health has paralyzed since last Wednesday 14 the production and marketing of meatloaf marketed with the brand The wick, which was infected, and all such products were removed. Analysis continues to detect the origin of the outbreak. Although the counseling defends the protocol developed until the alert is activated, a day later, criticisms have begun to emerge.

The same day that the health alert was activated, the Facua consumer association censored the slowness on the part of the Administration in warning of the origin of the infected product. The organization has created a platform for those affected to provide advice. For its part, the Patient Advocate Association He has sent a letter to the Office of the Superior Prosecutor of Andalusia claiming an ex officio investigation and the clearance of responsibilities for the outbreak. Further Andalusia, the confluence in the community of Podemos and IU, has announced that it will request the appearance of the Minister of Health, Jesús Aguirre, in the Permanent Deputation of the regional Parliament to clarify the behavior of his department in this crisis.