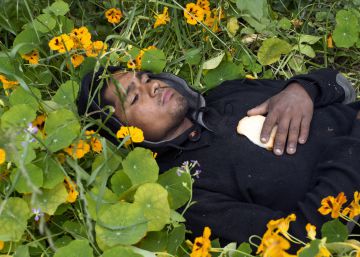 Near the wall that separates Mexico from the United States there is a place that houses lush vegetation. It belongs to Playas de Tijuana and is known as La Jungla. The photographer Lúa Ribeira (As Pontes, Galicia, 1986) ended up there as an integral part of LINE: The Border Project, a project launched by the Magnum agency in May 2019 in order to broaden the view offered of this border. The result of that intense week of work materialized in a series called The jungle, to which this photograph belongs that the author has decided to highlight within her short but relevant career. A journey that has led her to become, since last June, an associate member of the mythical cooperative of photographers.

“The Jungle is a place where many try to cross the wall. The high and dense vegetation makes it a suitable place for it. I discovered that there was a group of about a dozen men living there. I wanted to get to know them, get closer to them and focus the project on their lives ”, says the photographer. “From the photograph I have chosen, the gesture attracts me, it has a lot of power. The balance that is established between my expression as a photographer and that of the protagonist is interesting to me. I like the tensions that are generated between photographer and photographed, the uncertainties and accidents that they entail. It was the protagonist himself who, when he lay down, made the gesture of grabbing a piece of bread and putting it on his chest. It is precisely the strong understanding that arises through such a symbolic gesture, the ability to generate that moment between the two, that makes this image something special for me ”.

Surrounded by greenery, staring into infinity, a young man clings to life in his fight for bread. Looking at the image, one cannot help but draw comparisons with the Ophelia by Pre-Raphaelite John Everett Millais. In both works the fine thread that separates life from death is palpable, as well as the misfortune of living. In the image you can see two of the characteristics that help define the artist’s work: her personal use of color and an accentuated theatrical character within an apparent normality. “I did not realize until long after the similarity with Ophelia ”, acknowledges the author. “And there are many who ask me if the photo has been staged, but it is not. In the environments where I work it would be very difficult. The images emerge through interaction. I work with very simple elements trying to get the temporary or circumstantial information absorbed by the context. That leads me to think of the image in a more pictorial way. Because photography itself offers so much detail and so much accumulation of information, I am in favor of trying to make the circumstantial disappear a little to get something more out of the figure and the gestural, something that links with people and the collective. My projects always end up having a clear chromatic coherence. I am not in favor of distorting color. I’m interested in the rawness of the real color, that the image is a ‘little square’ of that reality. The image is made with a digital camera that gives me the chromatic rawness and detail that I seek ”.

The image composes one more metaphor within a work that allows the author to dissect the world. Photography serves as a means of observing from the margins, “understanding by marginal what makes you look from another point of view to learn to see in another way,” he clarifies. “It’s about getting off the beaten path, and staying there for a while without really knowing what to do.” In your presentation within the Magnum website says she is “interested in nuns, thieves, and gardens. In the rooting of the body, witchcraft, hotel receptions and at the gates of heaven. In ghosts, in funeral directors and in gravity ”. “I am interested in images that contain a question mark. I always say that I like bad photos, in the sense that if they are good, everything is resolved. In my photos there are always things that annoy, that are out of the orthodox. That makes me push and experiment with what is wrong in theory, try to defend it, learn from mistakes ”.

After studying graphic design in Barcelona, ​​he obtained a degree in Documentary Photography from the University of South Wales. At present she has taken up residence in Bristol, England. His work has won several awards, among which the Jerwood Photoworks Grant stands out, and has been exhibited at different international festivals, including PHotoEspaña in 2014. “Photography attracted me as a way of doing something not useful,” he confesses wryly, ” it is a form of rebellion, of looking for another way of seeing life and meeting people who in other circumstances would not stumble upon me. She says that she is increasingly questioning the definition of documentary photography: “I have no interest in documenting. At most, I document the encounter that the photograph gives rise to. I think it’s time to rethink the documentary tradition, including the idea itself ”. A renewal that Magnum has been implementing for a long time, where Ribeira is expected to become a full member soon. The total acceptance process takes at least four years, and involves overcoming two stages, the nominated member and the associate, during which the photographers must present a portfolio that proves their worth. The Galician photographer follows in the footsteps of Cristina of Middel and Cristina Garcia Rodero (full member since 2009). “Magnum has helped me a little to get out of some parameters that I had already established, and to free myself of preconceptions to do something different when it comes to dealing with current and relevant issues. I feel that I am in a learning moment ”.