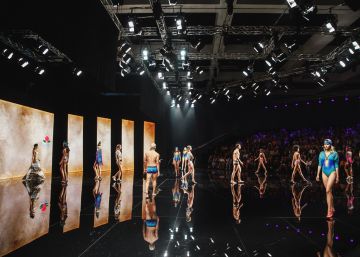 Friday, July 5, 1946. Micheline Bernardini, a 19-year-old French model, made history in the world of catwalks with a garment that would leave the world speechless: the bikini, which takes its name from an atoll of the Marshall Islands where EE UU was testing the atomic bomb. The design - created by Louis Réard, an expert automotive engineer who then managed his mother's lingerie store - marked a before and after in the swimsuit industry, today a millionaire business. Its global market value is close to 19,000 million dollars (about 17,300 million euros), according to the consultant Grand View Research, and its future is promising. For this reason, the Cabildo de Gran Canaria has set its sights on this type of clothing.

39 participants will show their models for the 2020 summer season

From October 3, the experts of the segment will meet at that tourist site to present their news at the Bathroom Fashion Week of Gran Canaria, which is now under the baton of Fería de Madrid (Ifema). “We are a unique event in the industry within Europe,” says Minerva Alonso, Minister of Industry and Commerce and Handicrafts of the Cabildo. In this edition, 39 participants (including designers and brands: 23 Gran Canaria, nine of the Peninsula and seven international) will show their next models for the summer season of 2020. The annual event was born more than 20 years ago. Since then, the purpose has been the same: to promote this sector. But now he goes in search of the foreign public. It was previously held in June, but now it has been passed to October. "We want to integrate it into the mainland's catwalk circuit," adds Alonso.

There will be an official television of the event, Fashion TV, which will echo the collections

There are many compelling reasons that support this objective. Among them are the long history of the bathroom fashion industry in Spain, the kilometers of coastline and the projection potential of the sector to the millions of tourists who visit the country every year, the organizers say. For Ifema, the event complements its national offer in the field of fashion and creation. "We are delighted to put our knowledge at the service of this event", they comment from the entity specialized in organizing fairs, halls and congresses. The celebration in the Cabildo de Gran Canaria has a program that includes 21 parades, four of them for children's fashion. To promote this project, the catwalk will have the support of eight sponsoring brands that double the contribution of the previous edition, close to 280,000 euros.

Among the participating designers will be Román Peralta, Ola Olita, Diazar, Laut Apparel, Palmas, Carlos Sanjuan, Maldito Sweet, Lucas Balboa, Chela Clo, among others. In addition, Kokú Kids, Ladybug’s Cris and It Child will attend, firms that focus on the little ones. Fashion TV, the world's leading specialized channel in the fashion universe followed by 78 million people worldwide, will be the official television for this call and will echo the collections presented. Your daily broadcasts will include a five-minute summary of the event in primetime on your Swimwear program and on your YouTube channel. For those who cannot go there, there will be live broadcasting through a mobile application.

During the days of the event, participants will also appreciate industry trends such as garments made from recycled materials and sustainable fabrics, such as organic cotton. "We hope that all these developments and changes will be a great boost for our industry," Alonso said.