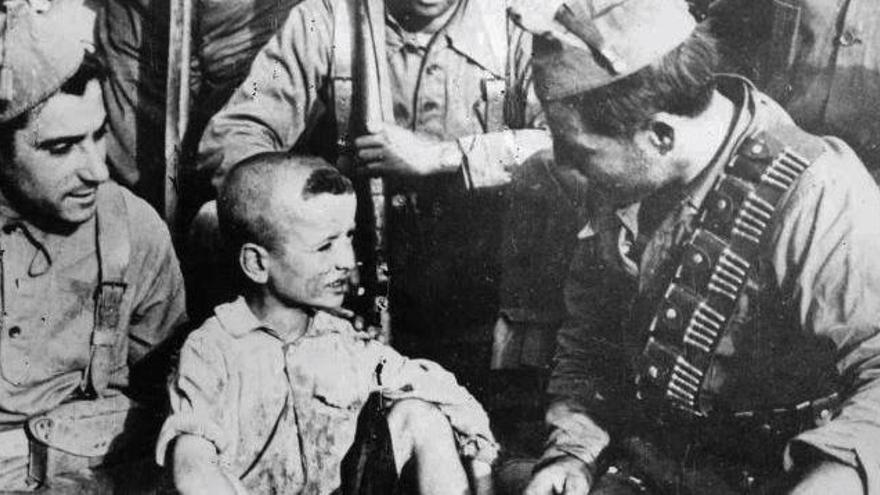 In an old press photograph, a boy of about eight years, with a characteristic lock of hair, He speaks while smiling barely at some militiamen equipped with weapons, belts and holsters that listen carefully.

The image is the work of the photographer Agustí Centelles and was taken in 1936, at the beginning of the Civil war Spanish, in the town of Siétamo, which had just fallen into the hands of the Republican Army in its failed offensive to take the city of Huesca.

That snapshot years ago, Joaquín Gasca, a photo-documentary filmmaker and curator of the private photographic collection of Octavi Centelles, son of the famous graphic editor. Gasca wants find out, at all costs, who is that child expression a little sad and what has become of him. “We don’t know anything about that kid, not even his name,” Gasca emphasizes.

Now, 84 years after the moment captured forever in that black and white photograph, the photodocumentalist has contacted the Siétamo City Council and entities memorialistsde Huesca to help him identify the minor.

The photo has been distributed, via WhatsApp, among all the residents of Siétamo, says José Luis Usé, mayor of the town. “It has been sent to the children of people who are 90 years old and over and who, when the war broke out, were also children “. It is a small group of people, “only five or six”, in a town of 800 inhabitants. But they may hold the key, perhaps the starting point for a successful search.

And there have been advances. On the one hand, “a nonagenarian neighbor has advanced a possible name “. Furthermore, it has been found that the same child “featured in another newspaper photo a year later, during a visit by the President of the Generalitat, Lluís Companys, at the head of Aragon “, explains Gasca.

Is excited. Already in 2013 he launched another investigation to try to reach that little boy, which, in the case of remaining alive, would be more than 90 years old today. But that attempt came to nothing and now Gasca senses that, finally, he has found a good clue.

For him, the photograph in question has enormous and multiple value. “It is not only a historical document on the Civil War, it is also and above all the reflection of a personal tragedy,” he says.

That child, whoever he is, is alive or dead, he had just lost his whole family. His parents and his six brothers had been shot by the troops of the rebels after one of the fierce combats that were fought around Siétamo at the beginning of the fight.

In fact, when the image was published for the first time in the newspaper Now, within a chronicle signed by José Quílez Vicente, the caption explained to readers that the boy in the picture was telling the militiamen what had happened to his family.

Siétamo, a step away from Huesca, changed hands several times during the offensive and its inhabitants suffered in their flesh the atrocities of the war. Some were beaten by the rebels, others by the Republicans. So the conflict, according to the way each family experienced it, divided the population into two camps, as happened in all the towns and cities of Spain.

But more than 80 years later “people have been forgetting and what they want is not to reopen old wounds “, says Usé, who explains that last February, for the first time, the recreationist group Primera Línea, mounted a “neutral” representation of the battle of Siétamo in the same town, with an exhibition included.

Usé, like Gasca, and like Dani Abadía, head of First Line, have placed great hope in finding the orphan child in the photo. “He has strong features, but even so his face does not ring a bell.“laments the mayor.

And, to complicate matters, Siétamo, which now grows at the expense of Huesca, was until not long ago a town of emigrants. There were people who went into exile at the end of the war and there were not a few neighbors who marched to Barcelona and Zaragoza in the 60s of the last century, and even further, to America.

In what group of the local diaspora was this unknown kid? Or did it stay close? Maybe he ended up in a hospice or a relative took care of him. “We don’t know, we have no idea,” admits Joaquín Gasca, who prefers not to get lost in speculation. What this photodocumentalist is looking for is a reliable clue, a single one, from which to start pulling the thread. “It’s something that haunts me,” he says. Because, he insists, he is not happy until he reveals the story behind each anonymous victim who appears in old photos of the Civil War.

Dani Abadía, from the recreationist group First LineHe thinks he sees the same Siétamo from the Civil War every time he passes the highway from Huesca to Lleida.

“Seen from the west, the town has the same profile as in 1936, with the church tower standing out on the roofs of the houses “, he explains. It is as if nothing has changed, but it has. To the point that now Siétamo is not the scene of a bloody confrontation between Spaniards but of a staging, like the one made last February, in which the actors took to the streets in the military uniforms of that time, an exhibition on the war was mounted and a guided tour of the places where they were had fought.

For Dani, Siétamo is “the Belchite of Huesca”. “There was fighting from house to house, progress was very slow, with many victims, and the Molotov cocktails triggered a fire,” explains the head of the Front Line.

Where is the negative?

The original of the photo of the orphan boy with the militiamen, whose negative has never been located, is kept at the International Institute of Social History in Amsterdam, in the Netherlands. In addition, there is a copy in the photographic archive of the Anselmo Lorenzo Foundation of the CNT.

Its author, Agustí Centelles (1909-1985), who was born in Valencia and developed his career in Barcelona, ​​became famous with a picture of a group of stormtroopers who, sheltered behind some dead horses, star in a shooting in the first days of the Civil War in Barcelona.

At the end of the conflict, Centelles, who has been considered the Spanish Robert Capa, fled to France carrying a suitcase with 4,000 negatives of the war. In 2009, the Ministry of Culture, displacing the offer of the Generalitat of Catalonia, bought from his heirs, for 700,000 euros, the entire photographic archive of the famous photojournalist.