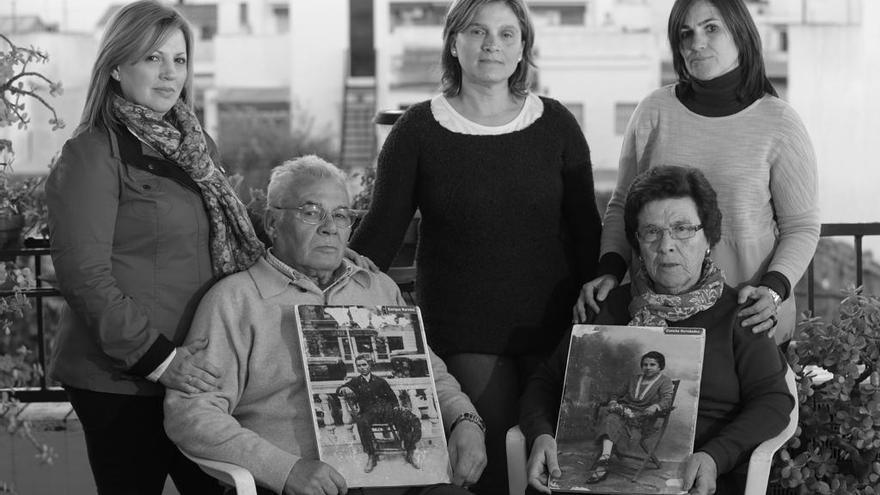 For Antonio Narváez, like many other victims of the Franco regime, time is up. He died almost a year ago from COVID, last October, at the age of 87 and the desire pending to find his parents, both of whom were retaliated by the Franco regime in Marchena (Seville). He came to testify in the so-called Argentine Complaint. He told the only judge in the world who investigates the crimes of the Franco regime that he was three years old when that happened, that it was at night when his mother was taken from the house to be shot while he and his brother slept and that they never heard from her again. His father had been killed a month earlier. Both are still missing.

Antonio will no longer be able to see them come out of the underground grave in which they are, a purpose to which he dedicated his entire life, and that is why his daughters are now the ones who continue the search: María Teresa, Eva María and María Concepción Narváez Valencia cannot hide the grief when they talk about him. Today they are his voice, his statements to the media and one day they will be, they trust, the hands that welcome the remains of his grandparents to bury them as Antonio always dreamed of. That is why last Thursday they addressed the Congress of Deputies with the photo of their father in hand as part of the 327,000 signatures with which Amnesty International calls for a more ambitious Democratic Memory Law.

“We have done it on his behalf, it is as if he had come with us,” says Conchi by phone shortly after getting off the train in which they have returned from Madrid to Seville, where they live. The decision to continue with the fight had been “in mind” for a long time because “we knew that my father was older”, but “you don’t think about it until the time is right”. When Amnesty International called his parents’ home to invite Antonio to the event, his mother told investigators that she had passed away on October 26, 2020, so the three sisters volunteered to attend.

María Teresa, Eva María and María Concepción want to “go all the way”, until they find the whereabouts of their grandparents and “give them a dignified burial, like that of any other person”, and that “the truth be known” of what happened, it was “the desire” of his father. Enrique Narváez Borrego and Concepción Hernández García were 32 years old when Franco’s troops ended their lives after the coup. They killed him on July 17, 1936 with a shot in the back; they took her a month later. They told him about his father that he had been buried in a mass grave, but no one told him about his mother. That marked his life: “He was very young, but he never forgot that scene, it stuck with him,” recalls Conchi.

Both he and his brother, who was five years old at the time, were raised by his grandmother, who barely brought up the subject, Antonio recalled in several interviews in the media that they did in recent years. He lived with the anguish of not knowing what had happened to his parents or where they were. Conchi explains that “it is believed that they are in Marchena”: his grandfather “in the common grave of the cemetery” and his grandmother “it seems, from some indications, that too, although it is not so clear.” Antonio left a DNA test done so that in the event that the remains are found, they can be compared.

“Let’s see if I can get the two of you together”, I longed to talk to elDiario.es six years ago. He was about to witness one of the most important moments of his life, the declaration that he made within the framework of the Argentine Complaint Before the Argentine judge María Servini, instructor of the only cause in the world that investigates the crimes of the Franco regime. He was, he said shortly before entering the Court of Instruction No. 8 of the Prado de San Sebastián, in Seville, “nervous” because for the first time his testimony was going to be heard: “You cannot get an idea of ​​the state of nerves I have, it weighs a lot to face these things almost 80 years later, “he told the journalist.

Later, in a video recorded by Amnesty International, he said that he had “felt an emotion like a long time ago. Because it seems not, but being able to express myself freely about what happened at home … For me it was an unforgettable day.” In Spain, the door of justice is closed for the victims of the Franco regime. This despite the claims made by various international organizations; the last, the UN Committee against Forced Disappearances, has asked Spain to review the obstacles that prevent it, including the Amnesty Law or the prescription of crimes.

Both Amnesty International and memorial organizations and government partners, including Unidos Podemos, ask that the Democratic Memory Law, which has begun its proceedings in CongressBe more ambitious in this regard and open yourself up to reviewing these obstacles. The PSOE, however, does not seem willing to give in on this matter and defends that the norm moves within the framework of “restorative justice”, guarantees the right to investigation and access to the judicial truth of the victims, as explained this week the Secretary of State for Democratic Memory in this interview.