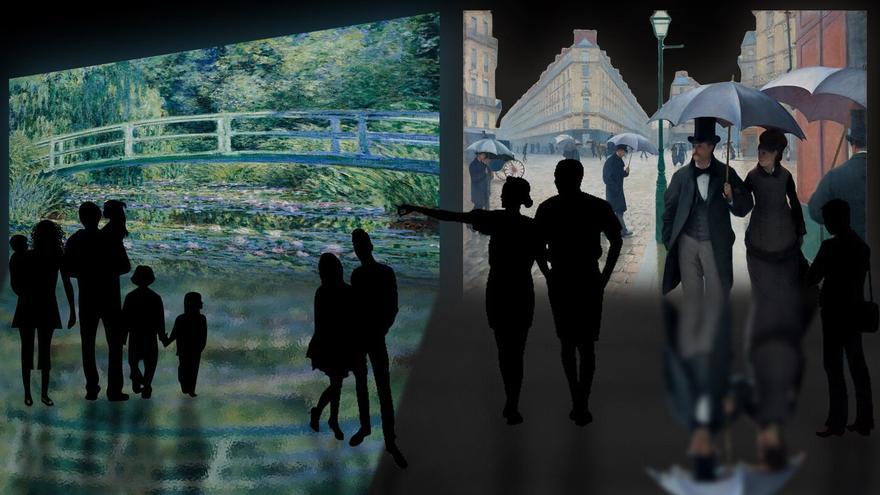 Miami, May 19 (EFE) .- “Lasting Impressions”, a digital exhibition that allows the viewer to “enter” the works of the best-known impressionist painters, makes its worldwide debut this Wednesday in Miami, where the offer of shows of this type is not stops growing after the crossing of the desert that was 2020.

With these “Lasting Impressions”, the Miami public currently has at their disposal three of these “unique experiences” that the most traditional see as a pseudo-artistic product that can destroy museums and other traditional ways of approaching art.

Marcelo Llobel, director of the Doral Museum of Contemporary Art (DORCAM), tells Efe that museums will inevitably have to adapt and take advantage of the possibilities offered by new technologies without forgetting to keep the flame of tradition alive.

“That is what is coming and that we have to adapt especially if we want to attract young people and future generations,” he says, although he emphasizes that it will never be the same to go to an opera performance in a theater than to listen to it on the radio.

MUSEUMS IN THE FACE OF AN OBLIGATORY ADAPTATION

As far as plastic art is concerned, “great works must be seen in person”, regardless of the fact that immersing yourself in the works of Monet or Van Gogh cannot be bad.

Museums have to reconcile the two and dedicate specific spaces to this type of experience. “This is what is going to happen, I have no doubt,” he stresses.

Precisely the Museum of Contemporary Art of Boca Raton, about 70 kilometers from Miami, has just announced the exhibition “Machu Picchu and the Golden Empires of Peru”, which will completely occupy its exhibition space and combine the immersive experience with a traditional exhibition of almost two hundred pieces brought from the Larco Museum in Lima, a cultural icon of Peru.

Both “Lasting Impressions” and the other two digital exhibitions open in Miami, “Beyond Van Gogh”, dedicated entirely to the great Dutch artist, and “Ase: Afro Frequencies”, created from the works of the surrealist visual artist Vince Fraser, are thought for the whole family, but in young people they arouse more interest.

ONLY A SHOW FOR SELFIES?

The fact that there is no limitation whatsoever to photograph or record experiences is an additional attraction for followers of networks such as Instagram, who are always looking for photos in unique places.

Nobody wants to miss a selfie against the backdrop of one of Monet’s gardens or under Van Gogh’s starry night.

The range of subjects that with the help of technology can be turned into digital exhibitions is endless, but for now it is in art that creatives seek inspiration.

As Mathieu St-Arnaud, creative director and visual designer of “Beyond Van Gogh”, premiered in March at the Ice Palace in Miami, recognized Efe, it would be impossible to gather so many works by a master of painting in one place and even If successful, the insurance price would make any exposure unfeasible.

Added to this is the possibility of having a controllable amount of public from the point of view of sanitary measures due to covid-19, since normally in these exhibitions several “passes” are made per day, each one with a small group of people who have previously booked an appointment.

When the arrival of “Lasting Impressions” was announced some time ago at the Adrienne Arsht Center in Miami, a journalist from a Miami newspaper wondered in an article who would want to see a Monet painting hanging on the wall of a museum when he could get into it. in the pond of the “Garden of lilies”.

The performing arts center claims that the images, lighting and music of the show produced by Princeton Entertainment Group allow for the experience of being inside more than a hundred paintings signed by Monet, Degas, Van Gogh, Renoir, Cézanne, Seurat and others in a different way.

Equipped with special 3D glasses (three-dimensional), the audience watches the hour-long show sitting in the seats positioned on the main stage of the theater, 18,000 square feet (168 square meters).

The production uses 3D / LED technology and screens that in total measure 125 feet (more than 38 meters) wide and have a resolution of 12K, according to a statement.

Together the images are over 10 million pixels and 1 billion color combinations, and it is the first time holography and Unreal Engine technology have been used to present a new vision of classic works of art.

The music of Debussy, Ravel and other composers and the songs of Edith Piaf, Charles Aznavour and Nana Mouskouri are the soundtrack of “Lasting Impressions”.

Andrew Scholotiuk, founder and CEO of Northern Gateway Films Inc., which is part of the project, defined “Lasting Impressions” as “an intimate experience that connects the audience with art on an emotional level.”

Marcelo Llobel recalls that when the museums were created they were also an “experience” and said that the important thing is to continue preserving the cultural heritage and fulfilling a social service.