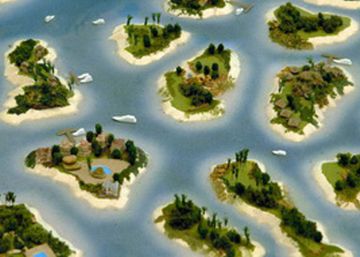 A bottle of iceberg water costs a little over 100 euros. In early summer another tourist was dying in Alaska looking for the bus To wild routes, Sean Penn's movie (and Jon Krakauer's book) turned into a bible hipster of the return to the "primal" sources of nature. In bookstores, publications about the virtues of walking as a philosophical and aesthetic practice proliferate. Some environmental groups advocate the sterilization of the human being so that the planet can continue its cycle freed from our harmful load ...

They could be examples of the "delusions" studied by Ramón del Castillo (Madrid, 1964) in the overwhelming The garden of delusions. The illusions of naturalism. Philosopher and anthropologist, pen always agile and controversial, Del Castillo explores the various currents of thought that are based on a supposed balanced and harmonious, protective nature. But the very concept of delirium employed by Del Castillo is voluntarily ambiguous: it is an illusion, but also a err in his double sense of being wrong and getting out of the way; it is the emergency condition of a repressed truth, even of the awareness of the limits of our understanding. In addition, delirium, an involuntary form of humor, would dismantle those clichés that we pass as neutral (natural); In this case, all those projections that we launch into the concept of "nature" with an absolute lack of realism. "If our grandparents of rural origins had lived long enough to see how we behave a weekend in the countryside, loving mother nature," writes Del Castillo, "perhaps they would have ended up mourning the mother who bore us."

Del Castillo is not a reactionary crook that denies the virtues of nature, but something more subtle. The central thesis of The garden of delusions It owes much to a certain Marxist thought (via Jameson or Eagleton): when it is intended to revive nature, we are putting an end to politics. Because “the desire to come into contact in a spontaneous way [con la naturaleza]”, He writes, is a“ historical and relatively recent ”product. And even, following the thought of libertarian geographer Bernard Charbonneau (another of Del Castillo's reference authors, along with Yi-Fu Tuan or Italo Calvino): we have invented nature by destroying it and this invention contributes to its destruction.

Although Del Castillo has not intended to write a didactic book, but rather an inclement criticism of the re-enchantment of the world, the well-tempered tone of his ironic writing makes The garden of delusions in the best compendium one can imagine of theories about nature: literary, philosophical, urban, musicological ... This includes the topic of world leak towards spaces of purity; the flanerismo, although "books on the art of walking devote little space to the pedestrian accident"; environmental amnesia and "solastalgia", a disease caused by the slow degradation of the environment; the different branches of environmentalism; the disturbing militarization of the campers' imaginary; the tourism of elites who consume experiences in untouched landscapes; the various theories around the garden as a space for games or torture; and also the surreal gardens and the praise of artifice; the wandering nature of Giles Clément and the "Copernican revolution" of Alain Roger in his nature that imitates art; the interplanetary junk spaces studied by star architects; science fiction cinema and its climatic apocalypse ...

Del Catillo is a scholar with a lot of connoisseur of each discipline you study. His taste for provocation is more than a gesture of spectacularization of philosophy. He is an atypical philosopher, perhaps with some artist, and even a delusional artist. That is why he does not abandon a slightly autobiographical tone, he is included as a character in many of the anecdotes (exempla of his theory); and what is perhaps more interesting in a structural sense: it opens paths and unforeseen digressions where the reader least expects it. For example, in the extensive and sharp notes to the text or in a misleading bibliography that occupies more than half a book, entitled "Delusional Library." In her Del Castillo is not limited to pointing out the sources of her text, but she undertakes an exhaustive review of the lucid delusions of naturalism (and perhaps more sympathetic) in aesthetics: literature, music, art.

It should not be necessary to insist: this is not an antiecologist book. Rather, the opposite. One of the qualities of this important work is to rethink in political terms what we mean when we talk about nature. Hence its urgency. "The crew of Apollo XI," writes Del Castillo "could call Houston and say he had a problem not to die breathing carbon dioxide", but we have "more than one problem, it would be said that enough, and no one to call "To help us discover" how to continue breathing in an increasingly polluted atmosphere. "