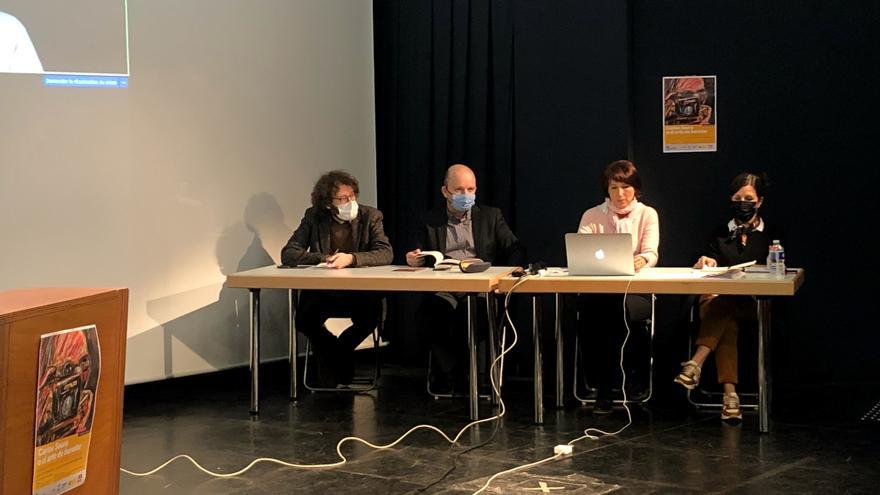 Paris, May 28 (EFE) .- Immersed in the filming of two documentaries, a short, a play and a series about Lorca, the Spanish filmmaker Carlos Saura received a tribute this Friday in Paris where he asked the public not to call him “classic”, a definition that terrifies him.

“A classic is a person who has already died, and I still don’t want to disappear. Call me whatever you want, but not a classic, please, it scares me,” he said in a virtual meeting with students from the Sorbonne at the Instituto Cervantes in Paris, institutions that paid tribute to him.

At the event, baptized with the homonymous name of a book that a score of specialists and university professors have just published in Spanish, “Carlos Saura and the art of inheriting”, the 89-year-old Aragonese director spoke of his multiple artistic interests and of the projects that have him still very busy.

The director of films such as “Carmen”, “Cría Cuervos” or “La Caza” said he identified with Goya’s drawing in which a very old man uses two crutches to walk and says: “I’m still learning.” A motto that reflects your state of mind and intense intellectual activity.

With his characteristic humility and spontaneity, Saura said he read the recently published book quickly because it overwhelms him so much that they talk about it, and, except for the clear impact that the Civil War had on his childhood or direct references such as Luis Buñuel, he works by intuition and does not like to analyze himself.

“Outside of that I have no idea. Any artistic manifestation is the work of many things, I would not dare to judge myself. Psychoanalysis and psychiatry terrify me,” he asserted.

The hybrid event was one of the first held by the Instituto Cervantes in Paris after the reopening of cultural venues in France last week.

It was an event together with the Sorbonne Faculty of Letters, the Spanish Embassy and the Carlos III University of Madrid, which organized several round tables around the book, which analyzes how Saura dialogues with other arts.

“Carlos Saura’s cinema has been recovering all the culture prior to the Civil War, the liberal culture, the great figures, and has reflected on the identity of Spain in pictorial, literary, photographic dimensions. It is a total cinema,” he told EFE one of the curators of the publication, Nancy Berthier.

Berthier, professor of Hispanic visual arts at the Sorbonne, believes that Saura is a figure that will transcend in the history of cinema, because his work “does not age”, and defended that there is no other book that covers all the facets of Aragonese, for him that he has asked France to grant him the Legion of Honor, the highest recognition of merit.

Actress Laura del Sol, one of the mythical faces of Saura’s cinema, also participated in person in the event after embodying the main character of Carmen.

Del Sol is also the protagonist of the new publication of the UC3M Tecmerin Research Group (Television-cinema: memory, representation and industry), a booklet with a long interview in which she reveals in detail her career, her life in Paris, where he has lived for 34 years, and reflections on the industry.

“If I am lucky enough to be here it is thanks to Carlos (Saura),” Del Sol said during the event, where she also spoke about her journey as an actress by attending the Oscars, the Cannes Festival up to four consecutive times, and working with internationally renowned directors.

The actress and ex-dancer, immersed for years in training and dissemination projects of Spanish cinema in France together with festival programmer and journalist José María Riba, who died in 2020, will now continue as president of the association “Spanish in Paris”, an exhibition of Spanish and Latin American cinema in Paris.

After the death of Riba, its creator, the festival was not going to go ahead, but it will finally be held again from June 16 to 22 after the Spanish Embassy and the Cervantes Institute offered to take responsibility for the organization.