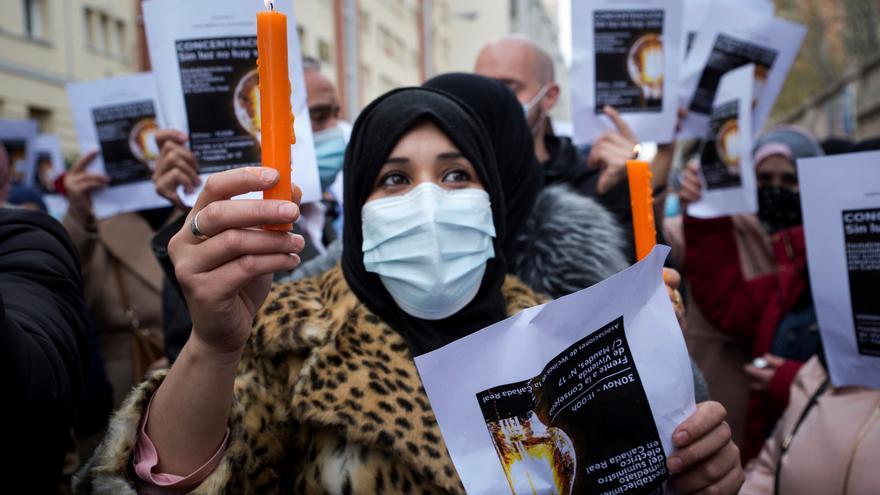 For a long time I have wanted to learn about the struggle of the leaders of Cañada Real. Just a few days ago I had the fortune to share with our spokesperson, Rita Maestre, and my partner Cuca Sánchez a meeting with them at the place they use for their meetings.

Around a table full of delicacies made by the loving hands of these fighters, we were able to listen to their experiences about the dramatic situation they have been living due to the lack of light for two months. While we listened to their heartbreaking testimonies, we could feel, at the same time, the vibrations of the solidarity of this group of neighbors, twinned in the fight for a solution that would give them something as basic as being able to heat their house.

They explained to us how they live their day to day without electricity, how this affects their children and their most vulnerable neighbors who need a respirator or a device to control apnea at night and cannot use it because they have no electricity.

They told us how they manage to heat their houses, to cook, to wash… and they gave us a life lesson in how this struggle has helped them to unite, empower themselves and give meaning to their lives.

They want to stop being invisible, they want to regularize the situation and they want to pay for electricity in order to have the right to it, "because electricity is not a whim, it is a right" they tell us. There is a year and a half child running around who still can't speak well, but who raises his hands to clap his hands and say "light, light."

One of the women takes the floor: "All day pounding with the message of the need for cleaning and hygiene with this coronavirus, but how do we guarantee that in this situation we live in? It is cold, the humidity is not removed from them. bones, there are creatures with chronic bronchitis due to this situation ... this is like being at war or, even worse, because the refugee camps have light, our families don't ".

Another woman told us that to dry her clothes, she spread them out on the bed, put a sheet on it and lay on it so that it could dry with the heat of her body. "Their messages are clear and they repeated it to us one by one:" we want to pay for the electricity. "

The boys and girls from La Cañada who we accompanied another day while they did their homework at the Caritas center also confirmed this: they filled out the message board asking for something as basic as paying for electricity, having a park, coverage of Internet to be able to send homework by mail, a driving school so that their mothers could get their license and not be isolated in La Cañada or a simple bus line. A childhood proud of the struggle waged by their mothers and mothers proud of the life lesson that their daughters and sons were giving them.

A few years ago I had the opportunity to share the struggle with other women leaders, those who stood in front of the doors of the houses they were about to evict, the women of the PAH. And I also remember Rosa Park, who led the fight for civil rights in the US; Lucy de Cornelis and the Movement of Women in struggle in Argentina, who in 1995 fought not to be dispossessed of their lands; Wangarin Maathai and the Green Belt Movement for their fight to curb deforestation in Kenya; to Carmen Avendaño from Mothers Against Drugs, who did everything they could to stop the impunity of drug traffickers in Galicia and to many more.

And with all of them I have realized that the movements for rights that appeal to the symbolic and material reproduction of life, which have to do with the struggle for land, food, health, nature and rights more Basic has something in common: they are led by women.

I remembered all this while we were having breakfast in La Cañada with the leaders, while one of them arrived with a medical report from the hospital, where she had spent the night with her two-year-old child due to bronchiolitis complicated by the cold and with a real risk to her lifetime. A heartbreaking testimony and example of what they, the leaders, live every day. They feel invisible: "before we were isolated in Cañada, now we are abandoned." What helplessness is ours and what power is that of these women who, despite their dramas, offered us their food, gave us applause and sang to us.

We left with a heavy heart, but also with his strength to transfer and support his fight. And we left with a folder full of letters written by the children of the Cañada Real, letters that have also been sent to the mayor of Madrid, the president of the Community and the Committee on the Rights of the Child and the Girl.

We leave with the commitment and honor of being the speaker of their struggle and with the invitation to return for the party that they have planned on the day that the Cañada will have light again.

Tags: dark, house, I prefer, leave, neighbors, no, to struggle