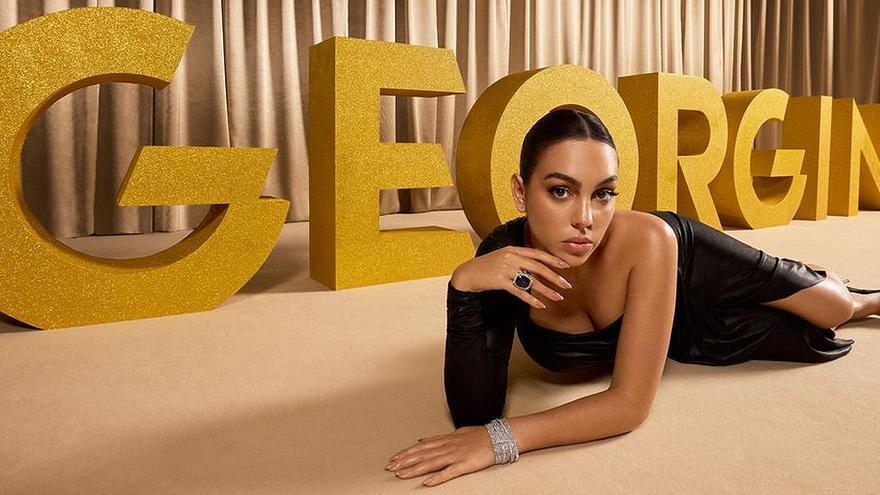 "Hello, are you going to be behind all day, with the camera?". With a perfect touch of Jaca, Georgina Rodriguez Hernandez advance among the paparazzi spotlights in the promotional video with which Netflix announces its new 'reality'. A script of a fairy tale how is the life of the Spanish influencer with more than millions of followers (and one of the 10 most influential in the world), model, dancer, mother, businesswoman ... and that since 2016 is the couple of Cristiano Ronaldo, with whom he already has a girl and, next spring, some twins.

But beyond the pyrotechnics of covers, the 'stories' and the red carpets little is known about one of the famous homelands with the most glamor and zeros in the checkbook. "Many know my name, few know who I am," says the protagonist of 'I am georgina', "an emotional and in-depth portrait" of the woman behind Instagram and the big headlines. CR7's partner, who lives in Turin with the footballer, and where the program began to be filmed last spring, he will reveal in front of the spotlight “all aspects of his life, from the most public and well-known part to the most personal. We will live their day to day, their motherhood, their relationship, their trips, their parties ... ", explains the chain, which confirms that both the player and their children have a prominent weight in the 'reality', that will premiere on the 27th (coincidentally, the day the honoree will turn 28).

Although there are those who compare with Kim kardashian, your life is quite different. For example, these 10 chapters.

"Me dad [exjugador y entrenador de fútbol] He is Argentine and my mother is from Murcia. They went to Buenos Aires with me sister ivana [nacida en Granollers en 1992] so that they would meet my father's family. They decided to stay there for a while and I was born. My father tried to convince my mother to live in Argentina, but he did not succeed and, when I was one year old, they returned to Murcia. After, we moved to live in Jaca", explained the" model "(as Georgina defines herself), in one of the few interviews that she has granted to date. From 3 to 17 years old she lived in the municipality of Huesca, where, during more than a decade went to dance classes at the Susana Ara Dance Academy. This center, as well as the cathedral and a candy store in the city appear in the 'docu-reality'.

"Ballet has shaped my body and my personality. The discipline that dance demanded of me is not only reflected in my body, but also in my way of being ", she has confessed in 'Women's Health'. For 15 years he studied classical ballet, which continues to practice as a regular training [los vídeos con sus rutinas de danza fueron un 'hit' del confinamiento], because, in addition, it gives you values "such as love for all forms of art, companionship, discipline, and the importance of leading a healthy life." For all that, his daughters also practice it.

At 18 Georgina decided to leave Jaca and find a life for herself. His first job was waitress in Huesca. When he saved a little money, he bought a ticket and planted himself in Madrid. She was 19 years old when she worked as a clerk in Massimo Dutti. Until she left the store for four months to travel to England to learn English (she was an 'au pair' in Bristol). On the way back, he was in the store Prada of El Corte Inglés before landing at the 'boutique' of Gucci, where one day in 2016 he walked through the door Cristiano Ronaldo and turned his life upside down. Now she is the one who wears Gucci, Hermès, Louis Vuitton or Dior in the photos she uploads to her social networks. "I have worked hard and I have had a sacrificed life and the universe has rewarded me with the greatest thing: a beautiful family," he told 'InStyle'.

Five years, from 2010 to 2015, was the then Real Madrid star, CR7, dating the supermodel Irina Shayk, in a relationship that the gallery did not quite believe. Just one year after the famous breakup, the footballer met the woman of his life and family stability in that chance meeting in a luxury store in Madrid where the dancer worked as a shop assistant. "Days later we met again at another brand's event and that was when we were able to speak in a relaxed atmosphere. It was love at first sight for both (...). The height, the body and the beauty caught my attention. I was trembling in front of him, but a spark ignited. I am very shy and I became agitated in front of a person who, with a single look, touched me deeply. Then the way that Cristiano treats me, takes care of me and loves me did the rest, "he explained years later.

As a result of her relationship with Cristiano, her first daughter was born in 2017, Alana Martina dos Santos Aveiro. The little girl was the forward's fourth daughter and the first to not be conceived by surrogacy. Before, his brothers were born Christian JR (2010) and the twins Eva Maria Dos Santos and Mateo (2017). Currently, Georgina and Ronaldo (36 years old) are expecting twins, a boy and a girl, who will be born in spring.

Alana Martina has just been born! Both Geo and Alana are very good! We are all very happy! ❤️ pic.twitter.com/nMT4rYc32U

Of all her professional facets, the one Georgina identifies with the most is that of model, profession in which he began to succeed as a result of his courtship with CR7. When she started dating the forward, she was fired from her job, but she immediately signed up with the agency UNO Models (the same one Bar Refaeli is on). Thanks to its 170 centimeters in height, its measurements of 85-62-90 and its 61 kilos of weight, it has been cover in 'Women's Health', 'Harper's Bazaar', 'Love', 'L'Officiel', 'Cosmopolitan'...). Likewise, she is the image of various brands, such as Sheglam, Gisada, Armani, Effek ... and an international ambassador of the chopard jewelry.

With its almost 30 million followers On Instagram, Georgina Rodríguez can boast of being one of the most influential Spanish women on the international scene. It is estimated that his fortune amounts to almost nine million euros (The rate for their 'posts' does not go below 8,000 euros and the 'cash' per interview is about 100,000 euros). Therefore, she can afford expensive gifts for her boy, such as the car valued at 180,000 euros that she bought for his birthday.

Like any good 'influencer', Georgina has also launched -last February- her own clothing brand, Om By G, in this case designed for 'casual' or sporting moments, but exclusive and luxury. His first model, a 'total red tracksuit' [a 108,95 euros cada una de las dos piezas] it flew, right off the virtual shelves, but announced that it was working to present new designs.

Rodríguez, who considers herself to be a person "believer and very familiar" (You just have to review his Instagram), he also shows from time to time his solidarity side, such as the collaboration he has maintained for a long time with the New Future foundation, which helps homeless children and youth, and with the FESBAL food bank.

Since he lives with his big family in Turin, the model has become a local star and they invite her to all openings, events and festivals, to which she goes alone or by the hand of Ronaldo. It has already become a regular in the Cannes Film Festival, where it shines especially for its outfits, like the one last July, when she wore a brown brown dress with a large opening in the skirt of Jean Paul Gaultier. In Spain, she has participated in the television contest 'Mask Singer', and has also served as co-presenter in Sanremo. At that famous festival, the one from Jaca dared to sing, quite correctly, a song. He has also participated in a gala of MTV awards, where she was in charge of give an award to Rosalía.