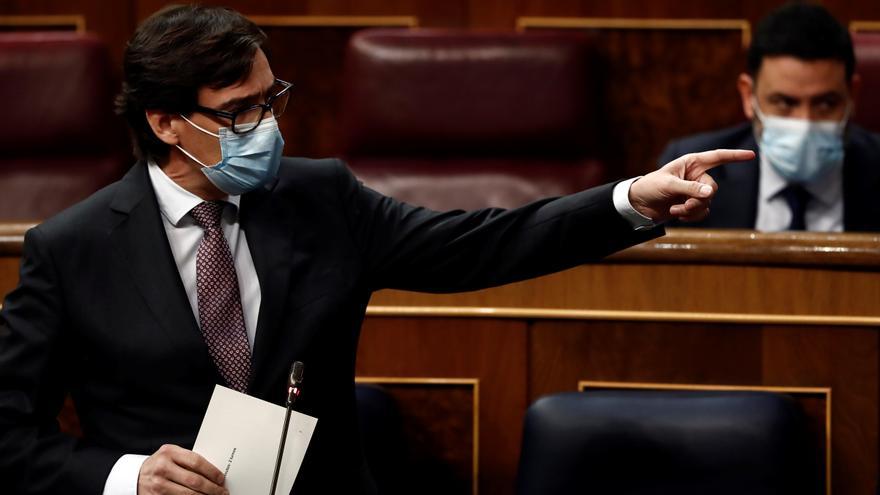 “The situation is worrying, very unstable and very fragile. We cannot lower our guard.” The Minister of Health, Salvador Illa, has warned that Spain is above the levels of contagion of COVID-19 that international organizations establish as risky and has recalled that in the case of the Community of Madrid it begs them. It has been a part of the argument in defense of the decree of the state of alarm in the capital and eight other Madrid cities in Congress, where the Government must be held accountable for the activation of this constitutional mechanism, although it is not necessary to receive its endorsement. Illa also recalled that “most of the autonomous communities” apply restrictive measures with “lower indicators” than those that the region had at the time of activating the state of alarm.

“The vast majority of communities have been making decisions along the same lines to control transmission in practically all cases with indicators lower than those agreed two weeks ago,” defended the minister, who reiterated that the restrictions that have been applied in Madrid, through the state of alarm, they are the same ones that were approved in the Interterritorial Health Council and that were overthrown by the justice for reasons “of form and not of substance.” The Government maintains that the order in which the Government of Isabel Díaz Ayuso collected these restrictions, which it opposed after having agreed to them with the Executive, were overturned by the court because in the argument the Community of Madrid did not include the law that endorses (the 1986 public health measures).

“We cannot normalize figures that are well above the figures considered to be safe,” said Illa, who also pointed out that neighboring countries implement restrictions with levels of incidence of the virus much lower than those of Spain and, especially , Madrid. Thus, you have mentioned France, Italy, Belgium or the United Kingdom. The head of Health has defended that to bend the curve of the coronavirus it is necessary to “act before and in a forceful way as do the countries around us.” “The epidemiological situation is changing. We must be prepared to react, “said the minister, who indicated that the” faster “and more” forceful “the measures, the better the virus can be controlled.

Before starting a debate in which the PP has reiterated the accusations of “authoritarian drift” and “arbitrary application of the government’s exceptionality”, Illa has asserted that “public health is the only thing that matters” to the Executive as well as to ” the vast majority of citizens, “he said in response to Ayuso’s constant complaint that the restrictions are suffocating the Madrid economy. The PP spokesperson, Cuca Gamarra, has spoken of “discriminatory injustice” and has ensured that the conditions were not met to activate the state of alarm, despite the fact that it doubles the figures that the European agency for contagious diseases places in half of the current incidence in the region the “extreme” risk. The Minister of Health had previously reminded him that other regions, such as La Rioja, Extremadura or Catalunya, among others, have applied similar measures.

The PP denounces an “authoritarian drift”

During the plenary session of Congress, the Popular Party has once again asked for the resignation of the minister and to hold him responsible for the deaths registered during the pandemic. “You are the Minister of Health in the country with the highest death rates, about 60,000, to which your incompetence has contributed,” said the PP spokesperson in Congress, Cuca Gamarra.

In his opinion, with the application of the state of alarm “the Government has decided to end any vestige of democratic normality.” “Its authoritarian drift began with the appointment of a socialist deputy as prosecutor and the last chapter is the reform of the CGPJ for its assault on the governing body of the judges,” Gamarra denounced. “Faced with this latest outrage, the PP is going to activate all the springs in Spain and Europe to avoid it,” he warned.

For the PP, the decision of the state of alarm is “arbitrary, authoritarian and abusive.” “The measures that it has taken in Madrid lack scientific foundation, where are the reports that support them?” Gamarra added that the state of alarm is based on “false data, based on improvised indicators with the aim of closing Madrid and ruining the people of Madrid.” For the PP, because of the Government Spain “had to endure the invasion of a virus that entered through Barajas. Finally, Gamarra has accused Illa of “subjecting the Madrid community to the yoke of its despotism.”