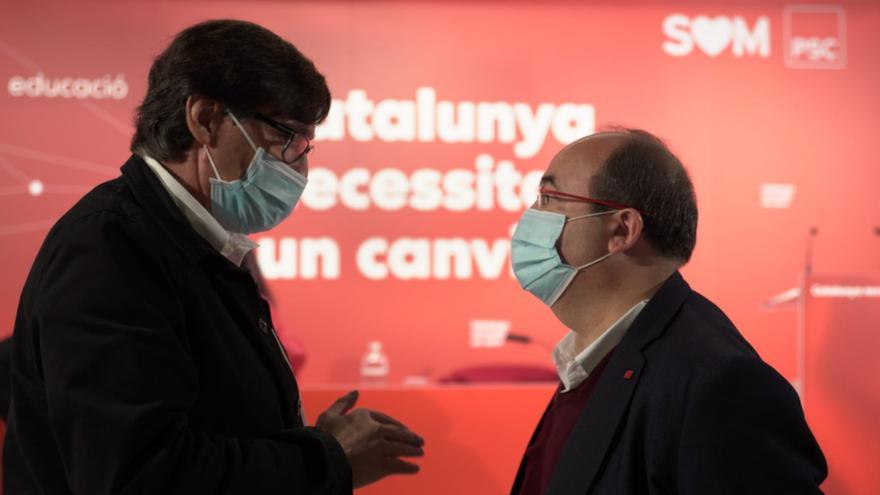 Only 11 months ago, Miquel Iceta gave Salvador Illa the book ‘The construction of a success’, a work that reviews the birth of the public health system in Spain, on the occasion of his appointment as Minister of Health. With a pandemic involved that has catapulted the popularity of Illa, the one who was an advantageous disciple of Iceta at the head of the PSC engine room now replaces his teacher as a candidate to preside over the Generalitat. If the operation is a success, it will be seen on February 14.

Illa (La Roca del Vallès, 1966) was Iceta’s loyal number two when he joined the coalition government. Three years before, Iceta had chosen him as organization secretary. From the plumbing of the Illa party, he recosó the wounds left open in the PSC by the beginning of the sovereign process and the 9-N consultation. Accustomed to negotiation and behind-the-scenes movements, his experience served to guide the conversations with ERC for the inauguration, an agreement that is now one year old.

His role in the negotiation and his loyalty to Iceta opened the door for him to be the man of the PSC in the coalition government. The Health portfolio fitted with Illa: a strongly decentralized portfolio, in which negotiation and management with the autonomies is key, and which allowed Illa to spend some time solving the Catalan issue.

Illa assumed the portfolio of Health with 53 years and more than half his life in politics. For a decade he was mayor of Roca del Vallès, a large town (10,650 inhabitants) of the second metropolitan crown with a textile tradition. As mayor, he was signed by the Government of José Montilla for the General Directorate of Infrastructures in the second tripartite and, after a brief stint in private business, he returned to politics to occupy a prominent position in the rear of the municipal group of the PSC in the Barcelona’s town hall. It was there that Iceta noticed him.

Only two months after receiving his award for long service to the party, he had to participate in the decision to impose confinement to the entire Spanish population, a measure that no Spanish government had had to consider in almost a century. From the engine rooms and behind-the-scenes agreements, Illa became the visible political face of the management of the pandemic and multiplied its public projection as ‘super minister’ in command of everything that did not fall within the competence of Interior, Defense or Transport .

If the first wave of the pandemic was marked by the omnipresence of Illa, after the end of the first state of alarm and the sole command of the Government, the minister has had to express his negotiating role with the autonomous communities, which have assumed the management of the virus .

His experience in management and negotiation, an iron fist reputation and more than proven loyalty to the party will also be key after the Catalan elections in a Parliament that polls show more fragmented than ever. It will not only be president who wins the night of February 14, but who achieves a majority to be invested and be able to govern, to which Illa aspires, a good connoisseur of Catalan society and uncomplicatedly not sovereign.

In both phases of the pandemic, Illa has shown a conciliatory character and with nerves of steel. He has avoided open clashes first with Quim Torra, when the then president launched into the BBC to question the confinement imposed by the Government, and now with the Madrid president, Isabel Díaz Ayuso, erected as a bully against the Executive for managing the virus . “My belligerence is focused solely against the virus. The rest, not a minute,” Illa settled last week.

The result of the management of the virus has been noticed in the surveys. According to the Center d’Estudis d’Opinió (CEO), the Catalan CIS, Illa is the second most valued Catalan politician, with 45% approval and 28% failure among those surveyed, only surpassed by the ERC leader, Oriol Junqueras. Although he fails with a 4.76, only Junqueras achieves the pass (5.5). Iceta, on the other hand, was suspended by 42% of those surveyed and approved by 33%.

All this has led to an unexpected change in the candidate for president of the PSC, and now the disciple will replace the teacher. The decision must be ratified on Tuesday afternoon by the extraordinary National Council in which both Illa and Iceta will intervene. 24 hours ago Illa himself stated on TVE that the PSC candidate would be Iceta. And Iceta at the beginning of October had assured TV3 that he was a better candidate than Illa since it was better for his number two in the PSC to stay in Madrid to “divide the work.” Now all the pressure will fall on Illa.