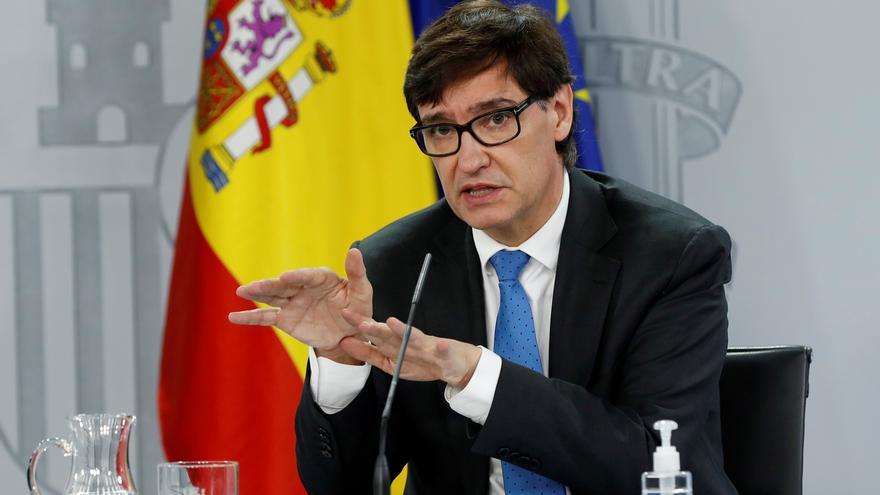 The Minister of Health, Salvador Illa, has appeared this morning, at the same time as the Deputy Minister of the Community of Madrid, Antonio Ruiz Zapatero His intervention was not planned and has been announced minutes before by La Moncloa. Salvador Illa has presented the recommendations of the Ministry for Madrid, which are not finally those that the regional government has established. The first is that they consider that all restrictive measures should be applied to the entire capital and also to all areas that have an incidence greater than 500 per 100,000 inhabitants. The Community of Madrid has not done so, as announced almost in parallel by the Madrid deputy minister, but only expanded those already filed last week to 37 health areas to 45, which are above an incidence of 1000.

The Ministry of Health has also made three other recommendations that the regional government has not followed: that bar consumption be prohibited throughout the Community, that the capacity of terraces be restricted to 50%, and that there be an explicit recommendation to limit mobility, also to the whole Community. All, according to the deputy councilor of Madrid, will apply only in those 45 areas.

“At this stage in which we are, it is up to the Autonomous Community of Madrid to make decisions, I want to make this clear. They have made public the measures they think they have to take and I want to value the recommendations made by the Health and the Government of Spain and that we think are the ones to be taken in Madrid, “he indicated. This Thursday, the minister stated in an interview with elDiario.es that he “did not contemplate” that there was no understanding with Madrid, and therefore it was not going to take unilateral steps.

“I do not want to hide from you that very hard and complicated weeks are going to come” but “it will be possible to bend the curve and” take control “if they take the appropriate measures, the minister has warned. Illa has appeared to “publicly convey” what the Government’s recommendations are. Although they have not agreed on the actions to be taken, “we are going to continue working” with the COVID-19 group because “it is a necessary area”, but “we reserve the possibility of explaining how the Government sees of Spain “the situation, without” going into reproaches. ” The spirit of the Government, he said, will be one of “loyalty” but one of “clarity.”

What the government believes is based “on the experience of these months” and on “the recommendations of our technicians,” Illa said. The Community of Madrid “is responsible for establishing its criteria” and he is not going to act as a “spokesperson” for a government that is not his own. The Government of the Community of Madrid and the Ministry have been meeting all week.