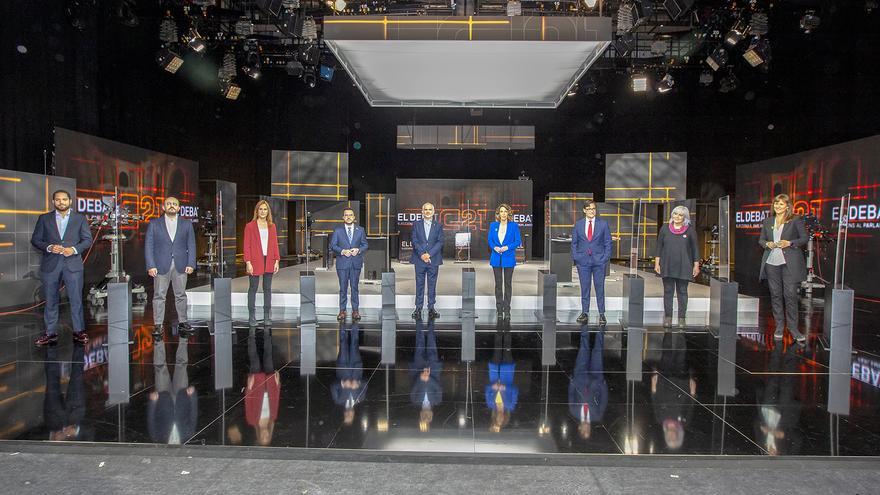 According to the polls, the race towards 14-F is entangled in a triple tie between the candidates of the PSC, ERC and Junts. The debate that TV3 has held tonight was probably the most ideal place to tie the breaker between three applicants who have run a rather cold campaign, partly because of the COVID-19 restrictions but also because everyone has preferred not to risk. Finally, both those who go first, Salvador Illa, Pere Aragonès and Laura Borràs, as well as the formations that are struggling to gain a foothold, Ciudadanos, ‘comuns’, CUP, PP, PdeCAT and Vox, have starred in a heated duel and with strong exchanges in some moments, in which finally both Ila and the independentistas have reproached each other for the management of the pandemic by their respective governments.

One of the news of the night has been offered by Laura Borràs when she has assured that, if the Ministry of Health has her party, the person who will direct it will be Josep Maria Argimon, the current Secretary General of Public Health and who has gained prestige in the management of the pandemic throughout its final months. In addition to this, Borràs has charged against the central government for “being in tow” of the proposals that Quim Torra made from the Generalitat and for having “recentralized” the management of the crisis.

“The chairs are already being distributed, but they have not told us if they are talking about public, concerted or private health,” replied Albiach, who also asked Borràs where Junts will get the 5,000 million that he proposes for health when his party “wants lower taxes and they don’t want to sit down to negotiate regional financing “. At the opposite extreme, Àngels Chacón has focused his proposals on the residential model, after recalling that it has been one of the sectors most affected by the pandemic. The PDeCAT candidate has advocated for public-private management of nursing homes that nevertheless “equalize access”, she said.

Illa has assured that “science and Europe will get us out of COVID” and therefore “no denial or isolationism.” The former Minister of Health has exhibited his experience in management and has proposed to strengthen the Catalan Public Health Agency, reduce waiting lists and improve the health infrastructure. Illa has even put on the minister’s outfit again to formulate her promise that before summer there will be 70% of the Spanish population vaccinated. “People want us to turn the page and start writing a new one,” said the socialist candidate, returning to one of the leitmotifs of his campaign. “And the first line must be to strengthen the health system, continue with vaccination, and enter into economic recovery with a Government of public servants,” he said.

“You in vaccination have credibility 0, because you presented it on pallets with the seal of the Government of Spain and when things got complicated, you said that everything was the responsibility of the Autonomous Communities,” Alejandro Fernàndez, of the PP, has jumped energetically. The conservative has charged against Illa for “arrogant” and for “not recognizing a single error in the management”, something that in his opinion “disables him for many things.” But Fernández’s most famous intervention came later, when with a sly style he had an exchange with the Vox candidate in which he reproached him for his populism. “Tell us whether or not the Parliament and the autonomous community are going to close, Mr. Garriga”, Fernández has stung him, who has managed to leave the representative of the ultra-right offside.

Like Fernández’s dart at Illa, the socialist candidate has received several attacks in the debate on the management of the pandemic. The ERC candidate, Pere Aragonès, has assured that Illa’s proposal on health spending implies less investment than last year. “If you propose to spend less, we will not agree,” said the vice president of the Government.

Aragonès has ended up referring to the residences before the interpellation of almost all the candidates. “It is clear that not everything has been done well”; he said, to then ensure that “in each wave the hospital response and care in residences have been improved”. The ERC candidate has also sought hand-to-hand with the former minister, in this case to compare economic efforts. Aragonès has assured that the central government has not released resources to rescue the self-employed and companies.

“You, in the self-employed sector, raise their numbers and do not help them,” Borràs has reproached Illa. “There is a very important difference between you and me, you do not have any responsibility and I have supported every measure of the autonomous communities”, has countered the former minister, who has addressed several of his rivals asking them “not to give him lessons “.

The Catalan public channel, which organized the debate, had established a block to talk about pacts. However, the candidates have preferred to take the issue to another area: reproach themselves for the pacts they had made in the last legislature. “Tri-par-ti-to”, Carrizosa told the representatives of ERC, PSC and ‘comuns’, an idea that both Aragonès and Illa have frowned upon, while Albiach exclaimed “let’s go!”

Borràs has launched a timid dart against Aragonès, the only reproach that the current partners of the Government have crossed, remembering that ERC approved the budgets of the central Government, so, in his opinion, it did not make sense that they now discuss among themselves . For his part, Aragonès has prodded Illa again and again about whether he will accept Vox’s votes, to which Illa has haggled over the question assuring that “neither by active, nor by passive, nor by peripheral will I reach any agreement with Garriga” .

Independence, “turn the page” and law

The national bloc has served, more than to contrast the proposals between independentists and non-independentists, to show the internal cracks in each bloc. The candidate of the CUP, Dolors Sabater, has begun by recalling the list of social laws of the Parliament overthrown by the Constitutional. “The right to housing does not fit in this Constitution,” he said. The anti-capitalist candidate has charged the rest of the left party for having approved general budgets “that people do not understand” and that, as she has accused, increase spending on the Royal House or the Army.

The socialist has not risked the national issue and has resolved it with the formula that he advocates since the beginning of the campaign. “It is necessary to turn the page and open a new one based on dialogue,” he said, although this time he added that it must be “within the law.” In this way, the candidate of the PSC has said, Catalan society will be able to “meet again”.

Aragonès has launched against Illa, to whom he has told that “the reunion that Catalonia needs is that of political prisoners and exiles with their families”. The Republican has assured that it is not possible to “turn the page” to what has happened in the last 10 years. “You want it is the amnesia in this country”, has reproached the former minister again. In the same sense, Laura Borràs has expressed herself, who has assured that what the PSC wants is for the independence movement to “surrender.” “You will never find Junts saying that something is not possible, because we are the ones who make the impossible possible,” he said.

Borràs has charged without naming her against the path defended by Aragonès, recalling that the dialogue table with the central government has only met once. “Junts per Catalunya has never believed in the dialogue table, because for you the worse the better”, Albiach has returned. Fernández, from the PP, has also referred to the dialogue table, who has charged against Illa because his government has allowed them to sit down with the independentistas. “We must recover the spirit of the transition and return to the framework of the law,” he said.